NEW YORK (JTA) — In all the deliberations over the U.N.-sponsored Durban Review Conference on Racism, the one abiding concern has been that the infamous first conference in Durban, South Africa, in August 2001, which degenerated into a cacophony of Israel baiting and outright anti-Semitism, will be repeated next month in Geneva.

Indeed, expectations for the Review Conference have been so low that both Canada and Israel pulled out early. In late February, the United States announced that it was disengaging, rapidly followed by Italy. Other major European Union states have indicated they might follow.

Yet in the flurry of Durban diplomacy in recent days, one important detail has been overlooked. Even as the United States extracted itself from the review process, it left the door slightly ajar, indicating it would accept a miracle, if an acceptable draft declaration appeared and met its conditions.

Specifically, the draft had to be shorter. It had to avoid singling out a particular country or conflict, as the draft being circulated was peppered with vilifying references toward Israel. It had to ditch the concept of “defamation of religions,” a smokescreen for the stifling of critical speech. Also, it could not reaffirm the 2001 Durban Declaration, which alluded to the Israeli-Palestinian conflict as a racial, not a political, one.

Lo and behold, the United Nations has produced a new draft seeming to meet those conditions. In actuality, however, there is still quite a way to go.

A revised, shorter draft, shepherded by the Russian chief negotiator, has dropped the attacks on Israel, including the grotesque “apartheid state” caricature. In fact, this new text contains no reference at all to the Middle East, Israel or Palestine. That is a major change for a United Nations that routinely and one-sidedly denounces Israel in resolutions and meetings devoted to almost any topic. Its abandonment flies in the face of those Islamic states, along with Cuba, that have tried to use the Durban Conference document to revive the equation of Zionism with “racism” first expressed in a 1975 U.N. resolution that was rescinded in 1991.

Gone, too, are the specific references to the “defamation of religions.” In effect, this would have amounted to a global blasphemy law to mollify those who rioted after cartoons about the prophet Muhammad were published in the Danish press in 2005. This “defamation” concept would empower religions (and those purporting to speak in their name) with the right to censor free speech, stripping a key democratic right of its purpose to protect the individual from abuse by the state.

All that is significant progress, and credit for it goes to the United States.

After President Obama’s inauguration, a 3-week-old administration dispatched myself and four others to evaluate the Review Conference preparations in Geneva. We conveyed the message that the conference must be redirected to its core purpose of addressing racial discrimination responsibly and constructively. In face-to-face conversations with 30 key ambassadors, we made our position crystal clear. In particular, we stressed that the culture at the United Nations, which regards Israel’s pariah status as somehow normal, has to be eliminated.

After our delegation’s return home, the United States announced that it would not negotiate or participate in a Review Conference based on the earlier draft document. It set out red lines for participation, some of which are now met by this document — but not fully. The United States explained that the Review Conference must not reaffirm the 2001 Durban Declaration “as it was adopted” because of, among other reasons, its singular, obsessive focus on the Israeli-Palestinian conflict. (Unfortunately, the new draft cites the 2001 declaration more than 30 times in 17 pages.)

Moreover, while the term “defamation of religions” has disappeared, there is a sinister emphasis on “incitement” prohibitions as set forth in U.N. treaties that could have devastating consequences for freedom of expression. In several places, the document outlines how it will demand that states prohibit speech, communications, media and advocacy organizations that may contribute to “incitement” — seemingly used here as little more than a code word for the “defamation of religion.”

The countdown to the Durban Review Conference has begun. While there is much to be done to counter bigots the world over, one thing is clear: Nations have finally begun to get the message that this conference was supposed to be a clarion call against the scourge of racism and it is not a place for settling political scores or a vehicle for any form of racism, including anti-Semitism. Above all, the Durban Review Conference must prevent incitement to hatred in the guise of criticism of one government.

(Felice Gaer is executive director of the American Jewish Committee’s Jacob Blaustein Institute for the Advancement of Human Rights. She was
a member of the official U.S. delegation at the Durban review negotiations in Geneva in February.) 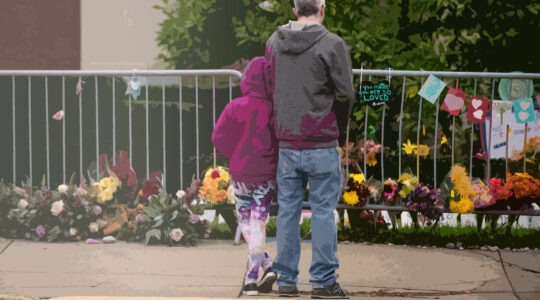 I thought anti-Semitism was a problem of the past. Then I became Jewish.