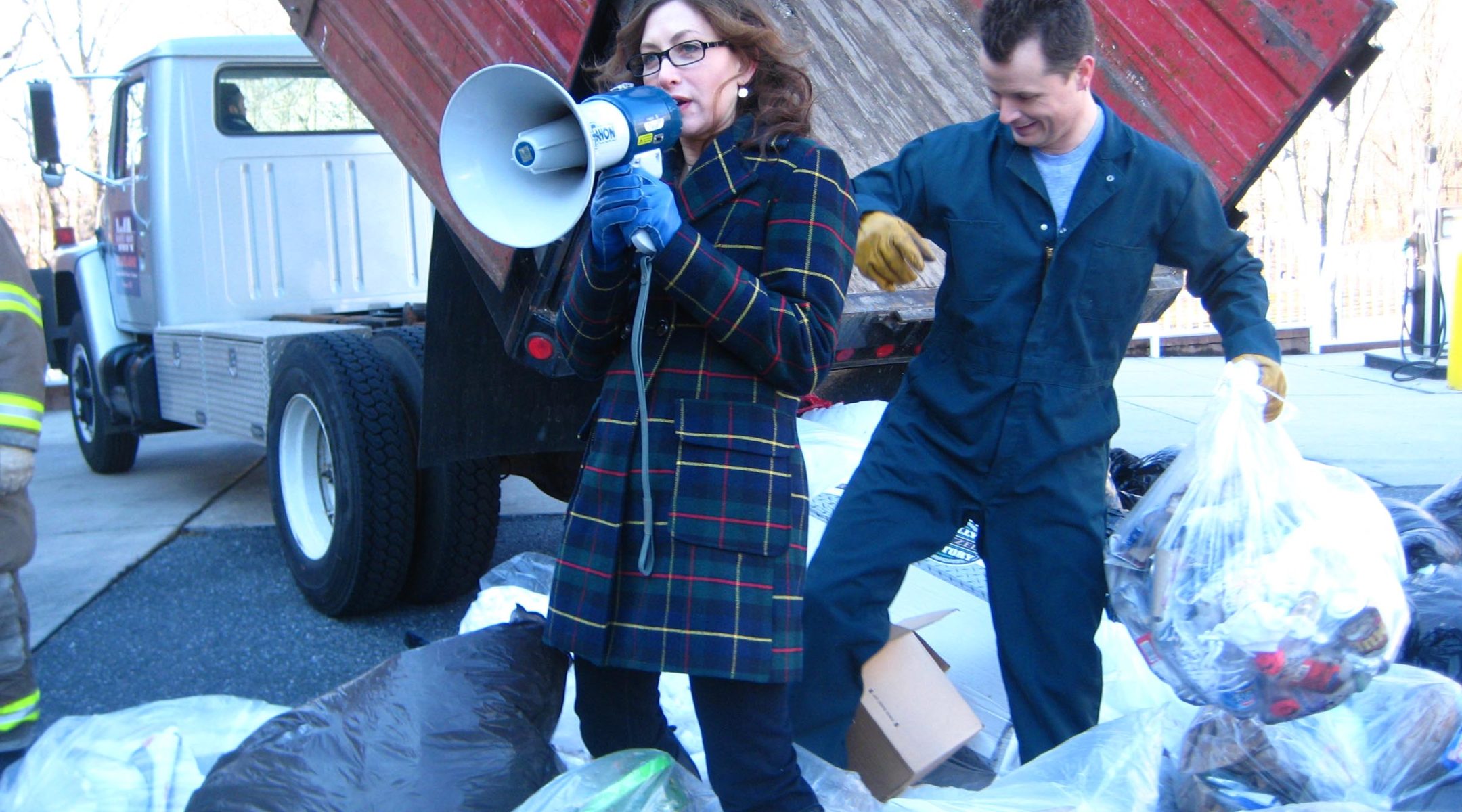 NEW YORK (JTA) — Though television personality Annabelle Gurwitch describes herself as secular, she says a streak of Jewish humanism runs through “Wa$ted!,” the eco-conscious reality show she hosts on the Discovery Channel’s Planet Green network.

Each episode of “Wa$ted!” tasks Gurwitch and her co-host, actor Holter Graham, to audit a household and encourage it to become greener and more cost-efficient.

A recent edition put the spotlight on Reuben and Belinda Ehrlich and their four children — a Modern Orthodox family from West Orange, N.J., who sought out the show after seeing it advertised on Craigslist.

“They take the idea of tikkun olam very seriously, as I do, too,” Gurwitch told JTA, using the term for “repair of the world.” “What greater way to express that than by leaving a smaller footprint on the earth?”

Gurwitch and her team visited the family in December and February to green the way the Ehrlichs prepare for and observe Shabbat. They added multi-use pans instead of single-use aluminum ones, installed a sophisticated lighting system to replace outdated timers, and advocated smaller, less protein-heavy Shabbat meals.

Gurwitch said she and her team worked hard to ensure the Ehrlichs weren’t enduring financial hardship because of their religious practices.

“The goal of the show is to find low-cost or no-cost ways to lower your footprint,” she said. “I am interested in seeing the idea of environmentalism taken out of this elitist, West Coast, East Coast idea, that just wealthy celebrities can do this green thing. If there’s not an economic incentive, who’s going to do it?”

Reuben Ehrlich, who works in pharmaceutical marketing, said the green focus fits in with other Jewish values such as tzedakah, commonly translated as charity, and chesed, or kindness.

“I think it just has to do with a recognition for our place in the world and what we leave behind,” he said. “One more thing that’s in harmony with everything else we’re working to do.”

Belinda Ehrlich, a writer who works from home, said the lessons the show teaches are not applicable only to Jews.

“It’s been great,” she said. “I’m composting all of our food. I’ve changed the way I cook, and it’s something that anybody can do whether they’re Jewish or not.”

The focus on advocating changes that individuals can make in their own lives is Gurwitch’s passion, she says.

While working as a commentator for National Public Radio, she became overwhelmed with dire environmental news about the environment — the doom and gloom found in films such as Al Gore’s Oscar-winning documentary “An Inconvenient Truth.”

“I had the idea that people were getting alienated by these big, big ‘Omigosh, we’re headed to doom’ things,” said Gurwitch, the former host of “Dinner and a Movie” on TBS. “Sometimes it just makes you want to just eat a steak and leave your lights on for 24 hours a day. You get panicky.”

“We don’t ever come here just saying to the families, ‘Here’s what you can do to save the planet,‘ ” he said. “We try to make it much more relevant to them.”

But, Gurwitch added, personal lifestyle changes often can be the catalysts that lead to more widespread results.

“This is not going to make sea levels stop rising. This is not the big, major work,” she said of the show. “But I do believe that the idea behind this is about changing your social norms so the larger issues will change eventually.”