With support for Abbas, is Obama betting on wrong horse? 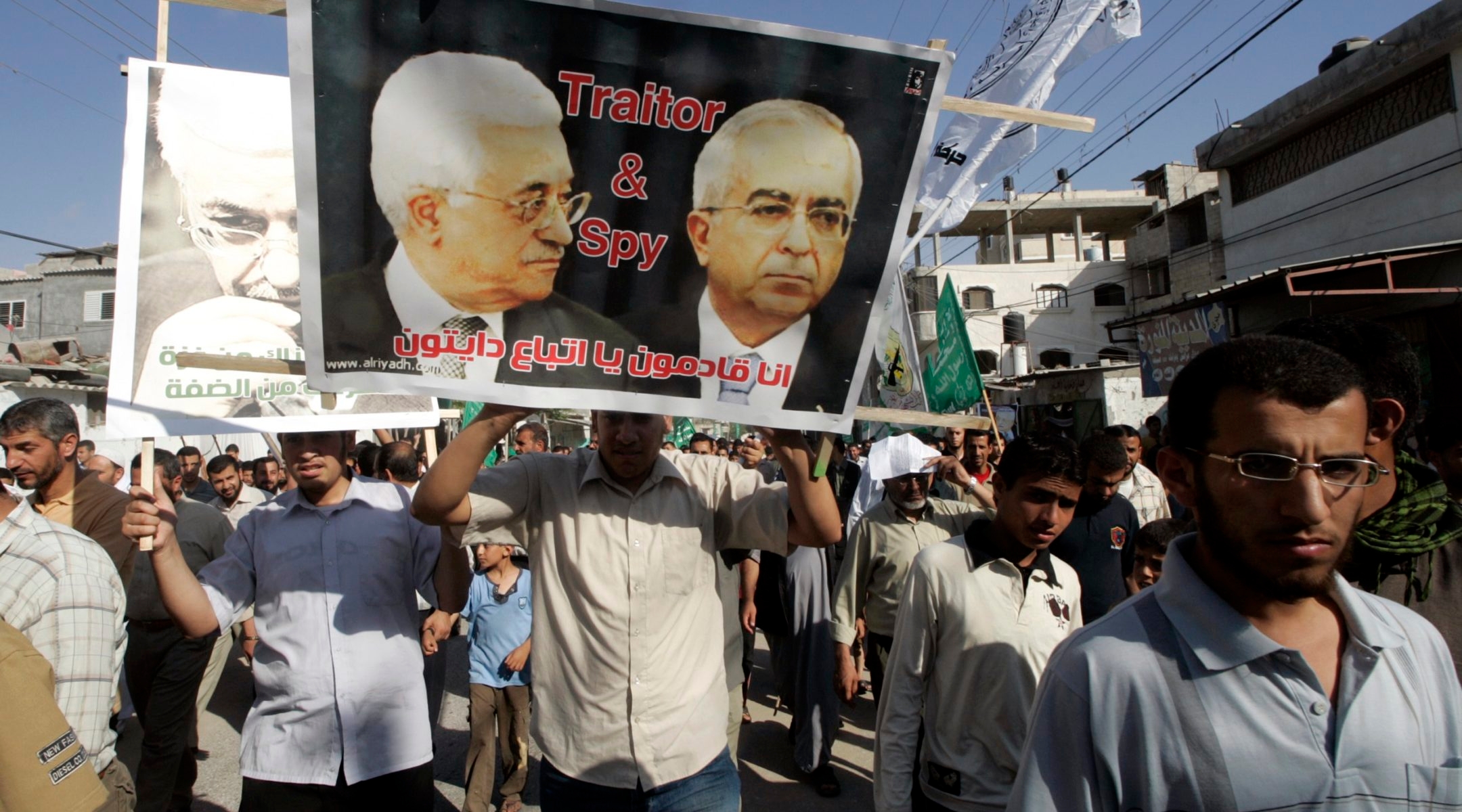 Hamas supporters demonstrate in Gaza on May 31, 2009 against P.A. President Mahmoud Abbas a day after a firefight between Hamas and Fatah in the West Bank left six dead. (Abed Rahim Khatib/Flash90/JTA)
Advertisement

The thinking is that with strong American backing Abbas will be able to carry the Palestinian street and deliver a workable peace deal with Israel.

But some analysts question whether Abbas has the clout to cut a deal that will be accepted by most Palestinians. They reckon Obama is betting on the wrong horse.

In his meetings last month with Abbas and Israeli Prime Minister Benjamin Netanyahu, Obama made one overriding demand: that Israel evacuate illegal West Bank outposts and freeze all construction in existing Jewish settlements. The move is calculated to enhance America’s standing in the Arab world, bolster Abbas’ flagging support on the Palestinian street and prevent the growth of what Washington considers obstacles to peace: Jewish settlements in the West Bank.

Abbas left Washington gratified and emboldened, saying he would not accept any modifications to the 2002 Arab peace initiative, which proposed trading peace for Israel’s return to its pre-1967 borders and a deal on Palestinian refugees. Earlier, Abbas said he would not meet with Netanyahu until the Israeli leader accepted the two-state solution and agreed to freeze all settlement construction, per Obama’s demand.

The new American approach has left the Israeli side deeply concerned.

Israeli officials argue that the fate of settlements should be decided in a final peace deal and that, in the interim, normal life in those communities should be allowed to continue — including construction to accommodate natural growth.

In the Israeli view, many of the settlements will remain under Israeli control in any peace deal.

The Israelis asked: What was the point of freezing construction in communities that by all accounts would remain on the Israeli side of any future border?

They said they were surprised to discover that the new administration apparently does not intend to honor the Bush commitment.

Some pundits believe Obama may be withholding that commitment as leverage to press Netanyahu into accepting the two-state model for Israeli-Palestinian peace.

Obama also hopes to encourage the Jewish state to make concessions for peace by bolstering Israel’s sense of security.

For more than two years, U.S. General Keith Dayton has been training Palestinian Authority forces in the West Bank to keep the peace and fight terrorism. The idea is to provide stability to the West Bank and create a situation in which Israel can feel confident about withdrawing its forces from the area. Obama also has promised to invest $400 million in developing an improved Arrow anti-missile system and, according to Netanyahu aides, told the prime minister in May that he would not press Israel over the nuclear non-proliferation treaty.

Israelis on the left and the right are critical of the Obama approach.

They say the focus on settlements could divert attention from actual peacemaking, and as Israel and the United States tangle over bricks and mortar, the peace process will suffer. They also argue that Obama is making a huge blunder in trying to construct an ambitious new Middle Eastern peace edifice with a Palestinian partner who cannot deliver, due to Abbas’ political weakness.

Part of the problem is that the Palestinians have never been as disunited as they are today.

It’s not only a question of Hamas in Gaza and Fatah in the West Bank (six people were killed in a gunfight between Fatah forces and Hamas late Saturday night in the West Bank city of Kalkilya); Fatah itself is deeply divided both between veterans and the young guard, and on key issues.

For example, Abbas heads a group that advocates advancing Palestinian goals by political means only; a second group holds that there should also be non-violent civil struggle; while a third group says the possibility of resorting to armed struggle or terrorism should be held in reserve. Whereas Abbas is for the immediate establishment of a Palestinian state, Prime Minister Salam Fayyad and a small group of leading businessmen argue that first there should be a long period of institution-building to ensure that the state is not established on a foundation of corruption.

The upshot of all these divisions, says Menachem Klein, an expert on Palestinian Affairs at Bar-Ilan University, is that Abbas and the Fayyad government have little support in Fatah or on the Palestinian street. Only a Fatah-Hamas national unity government with wide popular support can provide a Palestinian partner that can deliver, Klein says.

For the past several weeks, Fatah and Hamas have been negotiating on a national unity government in Cairo, with little success.

Egypt has said it will give the parties until July 7 to come to an agreement. If they fail, it would mean more trouble for Palestinian unity — and for hopes for progress on the Israeli-Palestinian front.