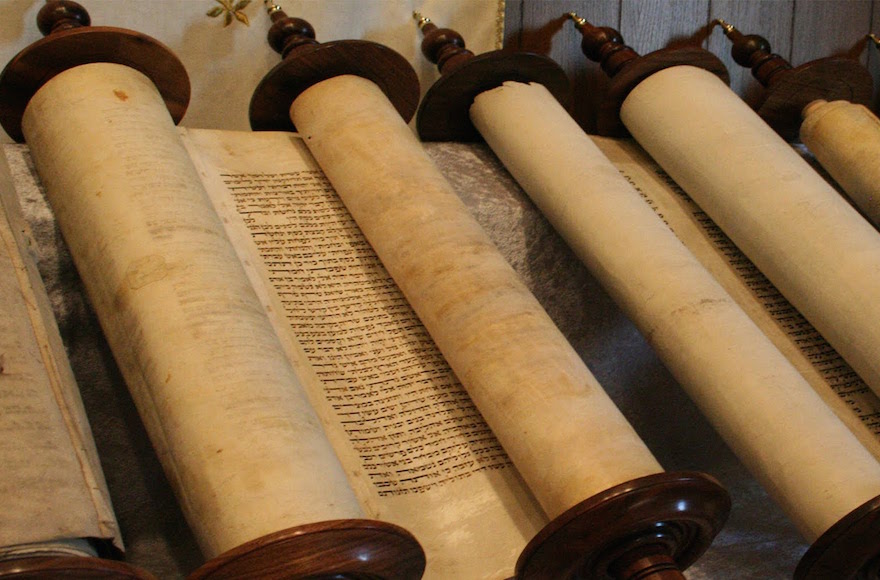 CLEVELAND, Tenn. (JTA) — When Jack Saunders began questioning the core religious claims of Christianity in the mid-1980s, it set him on a journey that eventually led to his embrace of the Torah and Jewish teachings.

But rather than become Jewish, the former Baptist minister — at the time the head of a small rural parish near the Georgia-Tennessee border — ultimately took on the identity of a B’nai Noah, or Noahide. The term refers to the covenant that God made with Noah after the flood, requiring all humankind to observe seven categories of laws: the prohibitions on idolatry, murder, theft, sexual immorality, blasphemy and eating the limb of a living animal, and the requirement to establish courts of justice.

Saunders gradually began gently prodding his followers in that direction, too, preaching solely from the Old Testament and quietly sowing doubts about central Christian teachings like the virgin birth. Eventually, approximately half the church members became Noahides as well, tearing down the church steeple and renaming their congregation Frazier’s Chapel B’nai Noah Study Center.

“I had made a promise to God that if he would show me truth, I would say it no matter what,” Saunders told JTA. “On the emotional side, it was pretty heavy stuff. But on the intellectual side, I knew this was right. This is the truth. But you don’t stand up the next Sunday morning and say, ‘Let me tell ya, all this stuff I’ve been teaching before, it’s all a lie. Now I really got the truth.’ Psychologically, that’s just not going to work.”

In the past, non-Jews interested in the Noahide laws often turned first to their nearest rabbi — usually a Chabad emissary, as Noahides typically hail from areas of the United States with little or no Jewish presence — or to one of the handful of Orthodox rabbis who have been willing to help them.

But in recent years, Noahide activity on the Internet has exploded. In addition to several informational Web sites that discuss the laws, Noahides have numerous ways to study and connect to each other, including a virtual Noahide yeshiva, Noahide personals and an organization of Noahide home-schoolers that provides detailed curricula for Noahide youth.

“A Noahide has some freedom in deciding how to celebrate,” advises the curriculum guide for Passover. “Consider reading a story of the Exodus, or watching Dreamworks’ ‘Prince of Egypt’ before or after the meal.”

Kristine Cassady, a 31-year-old mother who home-schools her five children in Indianapolis, started the Noahide Online Association of Homseschoolers, or NOAH, two years ago because of the few Noahide resources available for children. Cassady says about 35 families are now affiliated with the group.

“We’re trying to teach our children Torah, coming to the realization that Hashem has given the nations the laws from Noah,” Cassady said. “We were trying to find this information to give it to our children and pass down this heritage, and basically reclaim what was ours but had been lost on the way.”

Like Saunders, most B’nai Noah come from Christian or messianic Judaism backgrounds, and their frustrations with Christianity tend to be more intellectual than spiritual.

“We were always seeking the truth, we didn’t care where it fell,” said Ray Pettersen, who runs the Web site NoahideNations.com and hosts a Noahide radio show on Arutz Sheva, an Israeli station with conservative viewpoints. “In Christianity we always found flaws, but when you ask the pastor, you’re always told, ‘Well you got to have faith.’ For someone like me, that’s not good enough.”

Many B’nai Noah report that when they first sought information on the Noahide laws, they were frustrated by the lack of knowledge or interest on the part of the rabbis they contacted. But with the spread of the Internet, the curious can now choose from an impressive array of books and Web sites — many operated by Chabad or its affiliates, others by Noahides themselves.

The Internet also has helped foster a sense of community for Noahides, who can study Torah and participate in discussion groups now with Noahides from around the world. Several sites list contact information for Noahide communities as far afield as Brazil and the Philippines, while events such as the virtual Rosh Hashanah — hosted by the Oklahoma B’nai Noah Society with the help of a webcam and microphone — help unite Noahides separated by geography.

Several conferences also have brought Noahides together, the most recent of which was held over three days in early June near Dallas.

“We need communities,” said conference organizer Andrea Woodward, a Texan who followed her Baptist minister into Noahide belief 16 years ago. The minister went on to move to Israel and become an Orthodox Jew.

“The Internet has been our primary connection through the years,” Woodward said. “And that is growing. But can you imagine if all your friends are Internet friends? It’s just not satisfactory.”

Building communities entails creating religious practices, another area where Noahides have directed their energies. Nearly all the Noahide laws are prohibitions, and many Noahides say they need rituals to pass on some affirmative religious identity to their children. But mindful of the fact that most Torah laws are incumbent only on Jews, and of the prohibition on creating a separate religion, they adhere strictly to rabbinic dictates concerning what they may observe.

The Oklahoma group spent 11 years creating a Noahide siddur, “Service From the Heart,” that also functions as a guide to Noahide living. Many Noahides mark Shabbat by blessing wine and eating a festive meal, and refrain from eating pork products. On Sukkot, the Oklahoma group hosts an annual gathering that this year attracted about 25 people. They built a sukkah for eating and prayer, and screened the Israeli film “Ushpizin” on the sukkah wall.

“It was awesome,” said Pam Rogers, the group’s director.

Rogers says about 16 people are affiliated with the Oklahoma B’nai Noah Society, about half of them children. The group’s next project is the publication of an illustrated children’s book, written by Rogers, that will help convey Noahide teachings to kids.

“One of the precious things that the rabbis in Israel are doing is trying to give us liturgy and halachah that’s not new, but something that we can pass on to the children,” Woodward said. “Noahides that come of age to marry have grown up without friends of like faith. There’s no one to marry. And in order for us to have this thing grow and be passed on generation to generation, we need some structure. We need some rites of passage.”

Though some Noahides go on to formally embrace Judaism as converts, their geographic separation from the centers of Jewish life renders that choice viable for only a few. But Noahides also take comfort in the knowledge that the Torah has ordained a purpose for them as gentiles.

“We decided Hashem might need more gentiles than he needs Jews,” Rogers said. “We set out to be the best B’nai Noah we can be.”

Pettersen believes he can be more effective in spreading the truth of Torah as a gentile. Though he quit his job and spent two years studying Torah full-time, he never felt called to convert.

“If Hashem decides to change that,” Pettersen said, “He’ll let me know.”