The view from a West Bank hilltop

Itai Zar, who helped found Gilad Farm in memory of his brother killed by terrorists, gestures there on Dec. 11, 2008. (Brian Hendler)
Advertisement 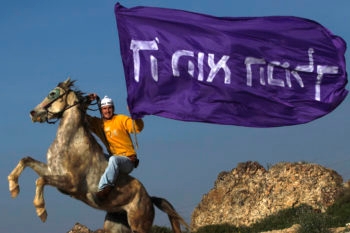 A settler rides his horse in Havat Gilad while holding a flag that says “God is the King.” (Nati Shohat / Flash 90/JTA)

Palestinians and Israeli settlers during a confrontation following a land agronomy disagreement near Havat Gilad on May 19. 2009. (Roy Sharon /Flash90/JTA)

Israeli soldiers and Palestinian workers help a Palestinian fireman who was injured when he tried to extinguish a fire allegedly set by Israeli settlers in a West Bank field near Nablus, June 1, 2009. (Boaz Oppenheim/Flash90/JTA)

HAVAT GILAD, West Bank (JTA) — “The water is out again,” Batsie Zar shouts to her husband, Itai, from the kitchen.

He quickly gets on his cell phone, trying to get one of the other young men in this isolated hilltop — one of about 100 illegal settlement outposts across the West Bank — to turn it back on.

If it’s not the water, it’s the creaky generator for electricity that fails, Itai Zar cheerfully complains as a pitched wind whistles against the window panes of his compact home in Havat Gilad. In the winter, a fire crackles in the wood stove Zar welded together himself to cook meals for the family.

On a hardscrabble patch of land on the edge of a steep cliff, Zar, whose tongue-in-cheek nickname is the Mukhtar of Havat Gilad — “mukhtar” is Arabic for village head — leads a band of radical, anti-state Jewish settlers known in Israel as the hilltop youth.

Several dozen have come to Havat Gilad — Hebrew for Gilad Farm — to study at the small yeshiva built here, to farm and take the struggle of their parents to settle the Land of Israel to another level. Critics, including some voices within the mainstream settler movement, say they pose a violent and dangerous threat to the future of Israeli democracy.

“Our youth understands that the state only understands force,” Zar said, citing as an example the gains Bedouin Arabs were able to make by clashing with the Israeli army over evacuations from unauthorized villages in the Negev. The clashes have hampered government efforts to force out the Bedouin.

When a rumor spread late last month that Israeli security forces were about to evacuate Havat Gilad, Zar’s comrades blocked nearby roads, threw stones at passing Palestinian cars, and reportedly set fire to nearby fields and olive groves owned by Palestinians. They ended up battling a blaze that crept up from the hills below their outpost toward the mobile homes of Havat Gilad — they said it was set by local Palestinians in revenge.

During a quieter period, Zar walks through the outpost, past chicken coops, grazing horses and young men driving a tractor through a wheat field. He points out the new houses built here in the six years since he and his wife first came, setting up a home in a shipping container.

The army evacuated them once; they promptly returned. The outpost was built as an act of revenge, Zar said, for the shooting death of his brother, Gilad, on a nearby road in May 2001. His brother had been the head of security for Karnei Shomron, a West Bank settlement where the brothers grew up.

There is a rustic, almost Old West feeling to the outpost. Overlooking a Palestinian village, Havat Gilad is accessible only by a dirt path off the main road. At the entrance, a wooden Star of David built into a pair of wooden posts welcomes visitors. One of the posts bears a faded orange ribbon left over from the campaign in 2005 against Israel’s withdrawal from the Gaza Strip.

Some of the outpost’s scattering of homes are made of wooden siding. One even boasts a front porch. Another has a bright red roof.

The settlers here say they are proud they used Jewish labor to build their homes; most Jewish houses in the West Bank are built by Palestinian laborers. Private donations paid for their generators and water tanks.

If an outpost is close enough to a major settlement, usually it will hook up to the larger settlement’s water lines. Some of Havat Gilad’s infrastructure was built by Amanah, the development company of the settlement movement. Until a few years ago, Amanah was funded by the Israeli government. Now it operates as an association and receives donations.

A 2005 government report on illegal outposts found that many had roads paved and other infrastructure built by government agencies, despite their illegality, usually when local municipalities misrepresented where the government funding was going.

At the Shir LaMelech yeshiva at Havat Gilad, Avi Lezer, 26, pauses from his text study to consider his position on the State of Israel.

“What is there to believe in? The government is a tool and it had great potential, but now it’s broken down,” said Lezer, his honey-colored hair falling in side curls framing a long, narrow face.

Outside the yeshiva, some younger students speak with resolute voices. They say they stand for a new path, unflinching and messianic.

“Our parents have their heads still in the Galut,” said one, a tall, square-framed 20-year-old named Ariel Perelman, referring to a Diaspora mentality. “They agree with us, but they don’t have time to make revolutions.”

Yediah Shoam, 19, said, “We are in a war for the Land of Israel, and yeah, we’d shoot. I’m both kidding and not kidding. We need to prevent evacuations, and war is war.”

During the Gaza evacuation of 2005, Shoam said, he was in the Gush Katif settlement bloc in Gaza — one of hundreds of West Bank youth that poured in to protest and, they hoped, thwart the evacuation. He said he was shocked that Israeli security forces were able to carry out what he considered unimaginable.

For some of Shoam’s comrades, that led to disillusionment not just with the state but with Israeli democracy itself. Many settlers had voted for Ariel Sharon and later, in a Likud Party referendum in 2004, against his withdrawal plan. But the withdrawal from Gaza was carried out anyway.

“We are now a different generation,” Shoam said. “We want the government to be afraid because if they are, maybe there won’t be any more evacuations.”

It was after the Gaza evacuation, Zar says, that his outlook hardened. Beforehand he was clean shaven and wore a small, knitted kipah — standard fare for a young man who grew up in the religious-Zionist settler community. But afterward, and with the arrival of the yeshiva at the outpost, Zar grew a beard and started wearing the large knit kipah that has become the trademark of the more fervent settlers.

His new outfit fit in with the culture of the new yeshiva, which identified with Bratslaver Chasidism.

Zar has a factory at the edge of Havat Gilad where he makes aluminum siding for trailer homes in the West Bank that have become ubiquitous as new settlements have cropped up.

He says he feels connected with Israel’s founders even as he feels alienated from what the Jewish state has become.

“I like to read about the pioneers,” Zar said, referring to the secular Jewish immigrants who settled prestate Palestine and are mythologized in Israel for working the land and forging a new society. “I feel myself to be close to them. Perhaps we are even more of pioneers than they were.”