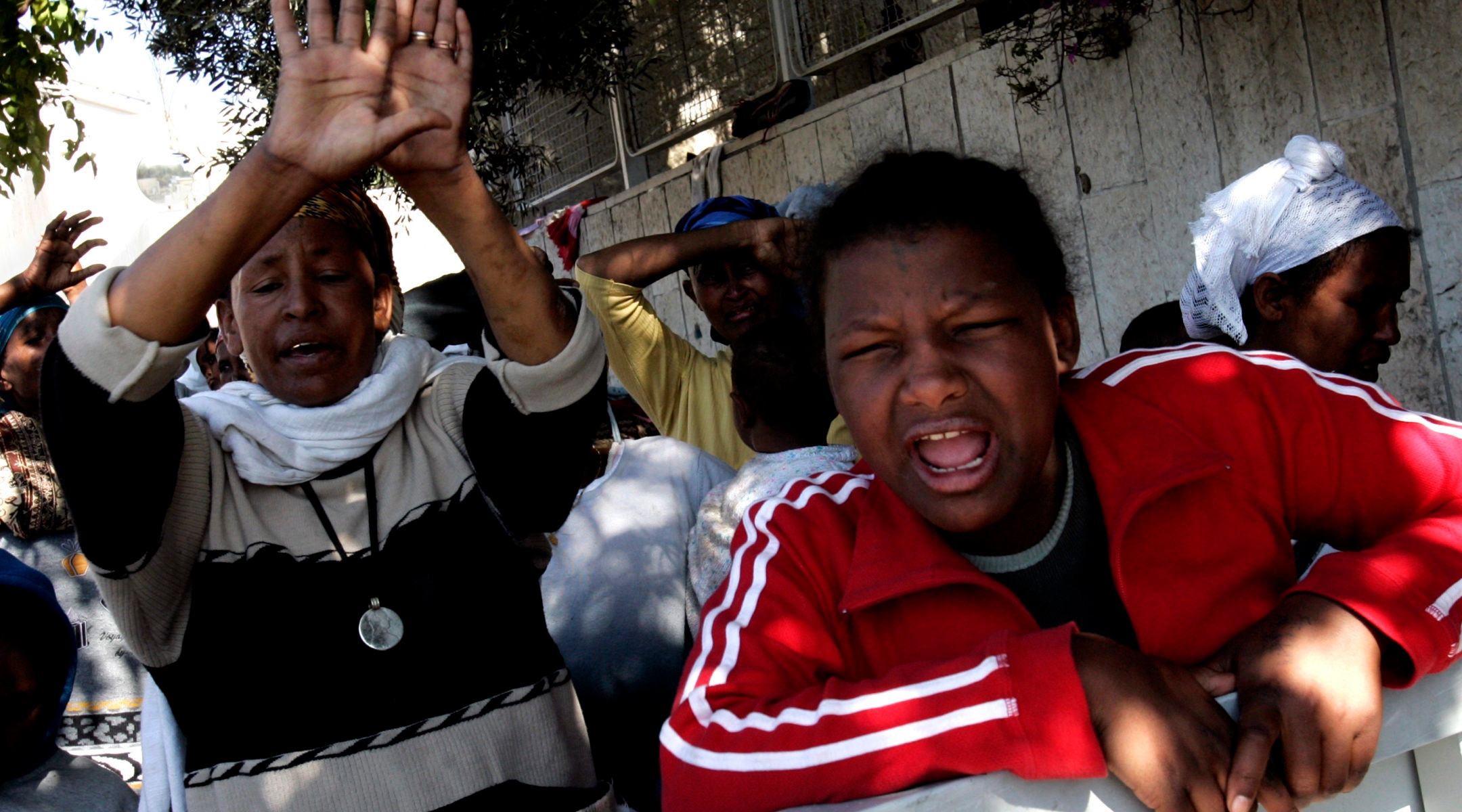 NEW YORK (JTA) — With advocates for Ethiopian immigration to Israel stepping up their pressure on the Israeli government, Israeli Interior Ministry officials are returning to Ethiopia to check the eligibility for aliyah of approximately 3,000 more Falash Mura.

The three representatives from the Interior Ministry, who were scheduled to leave Thursday for Ethiopia, are tasked with verifying whether anyone remaining in the country has legitimate claims to immigrate to Israel.

Under the new initiative, Falash Mura — Ethiopians who claim links to descendants of Jews who converted to Christianity generations ago — wishing to make aliyah must have a relative already in Israel who will file on their behalf and demonstrate Jewish maternal links. Spouses of such people are also eligible.

Ethiopians able to prove their Jewish lineage remain eligible for Israeli citizenship under the Law of Return, and 400 are currently in the process of immigrating that way, according to the Jewish Agency for Israel.

Advocates are hoping this new effort — coming a year after the last planeload of Falash Mura immigrants landed in Tel Aviv — will reopen the gates to mass Ethiopian immigration and lead to the eventual consideration of at least 8,700 additional Ethiopians.

“Continuing discussions are being held at the highest level of the Israeli government which would also authorize inspecting the 8,700,” said Joseph Feit, a key advocate for Ethiopian aliyah and a past president of the North American Conference on Ethiopian Jewry, the main Jewish advocacy and aid organization working in Ethiopia.

Ethiopian immigration long has vexed the Israeli government. Several times, Israeli governments have committed to bringing a finite number of immigrants whom advocates said constituted all the remaining Ethiopians eligible for aliyah, only to be told once the number had been reached that thousands more had been left behind.

Israel completed the most recent phase of mass Ethiopian aliyah last August, when the last of some 16,095 immigrants arrived under a 2003 decision by Ariel Sharon’s government to bring those eligible from a 1999 Israeli census of possible Ethiopian olim.

That census counted some 27,000 Ethiopians as potentially eligible for aliyah, but upon examination only 16,095 of those who filed immigration petitions turned out to qualify and were brought to Israel. Others received rejection notices or never filed petitions.

The purpose of the new Interior Ministry effort is to give those from the 1999 census who never petitioned for aliyah a chance to do so. In order to be eligible for this special opportunity, the Falash Mura must have relatives in Israel file an aliyah application on their behalf by July 31.

The Interior Ministry is supposed to complete the verification process by Sept. 30. Israeli officials say they plan to check approximately 3,000 individuals.

Falash Mura advocates, however, want Israel to check the eligibility of 8,700 Ethiopians whom they say are waiting in the northern Ethiopian city of Gondar to move to Israel.

The Ethiopians migrated to Gondar from their rural farming villages over the last several years — a move that left most without means of supporting their families. As a consequence, they have become dependent on aid offered at centers funded by NACOEJ and supported by individual local Jewish federations in North America and the United Jewish Communities, the North American arm of the federation system.

The centers, located in gated compounds, provide Jewish education, school lunches and some employment assistance to the population. No housing is provided.

The American Jewish Joint Distribution Committee used to operate health clinics in Gondar to provide for the medical needs of the Falash Mura, but the clinics closed in April after aliyah depleted their client base. The few Ethiopians who remained because their applications for aliyah were rejected were referred to Gondar’s hospital, where the JDC continues to pay for their medical care out of humanitarian considerations.

Advocates for the Falash Mura have been unable to convince the Israeli government to facilitate another mass aliyah movement. Ethiopians among the 3,000 who are deemed eligible for aliyah will be brought to Israel at the rate of 100 per month, according to the Jewish Agency, which is handling the aliyah operation.

“Initially there’s going to be 3,000 to check, and then the government will decide how to proceed,” said a spokesman for the Jewish Agency, which paid for the Interior Ministry delegation visiting Ethiopia. “They’re beginning with the 3,000, but everyone’s talking about a ballpark figure of 8,000 to 10,000.”

Many Israeli officials believe that the 8,700 Ethiopians for which the advocates are pushing are mostly Christian Ethiopians deceptively claiming Jewish links and adopting Jewish observances in a bid to escape Africa’s desperate poverty for the relative comfort of the Jewish state.

“We are creating a hell of a job for ourselves because of political correctness or trying to be nice,” Meir Sheetrit, Israel’s interior minister under Ehud Olmert, told the Jerusalem Post in a 2007 interview about the 8,700.

The Falash Mura are distinct from the Ethiopian Jews who retained their Jewish identity and observances over hundreds of years, and immigrated to Israel during Operation Moses in the 1980s and Operation Solomon in 1991.

On May 12, the Israeli government issued a decision saying that once the current group of 3,000 is checked, organized immigration to Israel from Ethiopia will cease.

Similar commitments in the past have collapsed under pressure from Ethiopian advocates in Israel and the United States, including Jewish federations in North America.

Whether the Israeli government’s decision of May 12 will be any different remains to be seen.