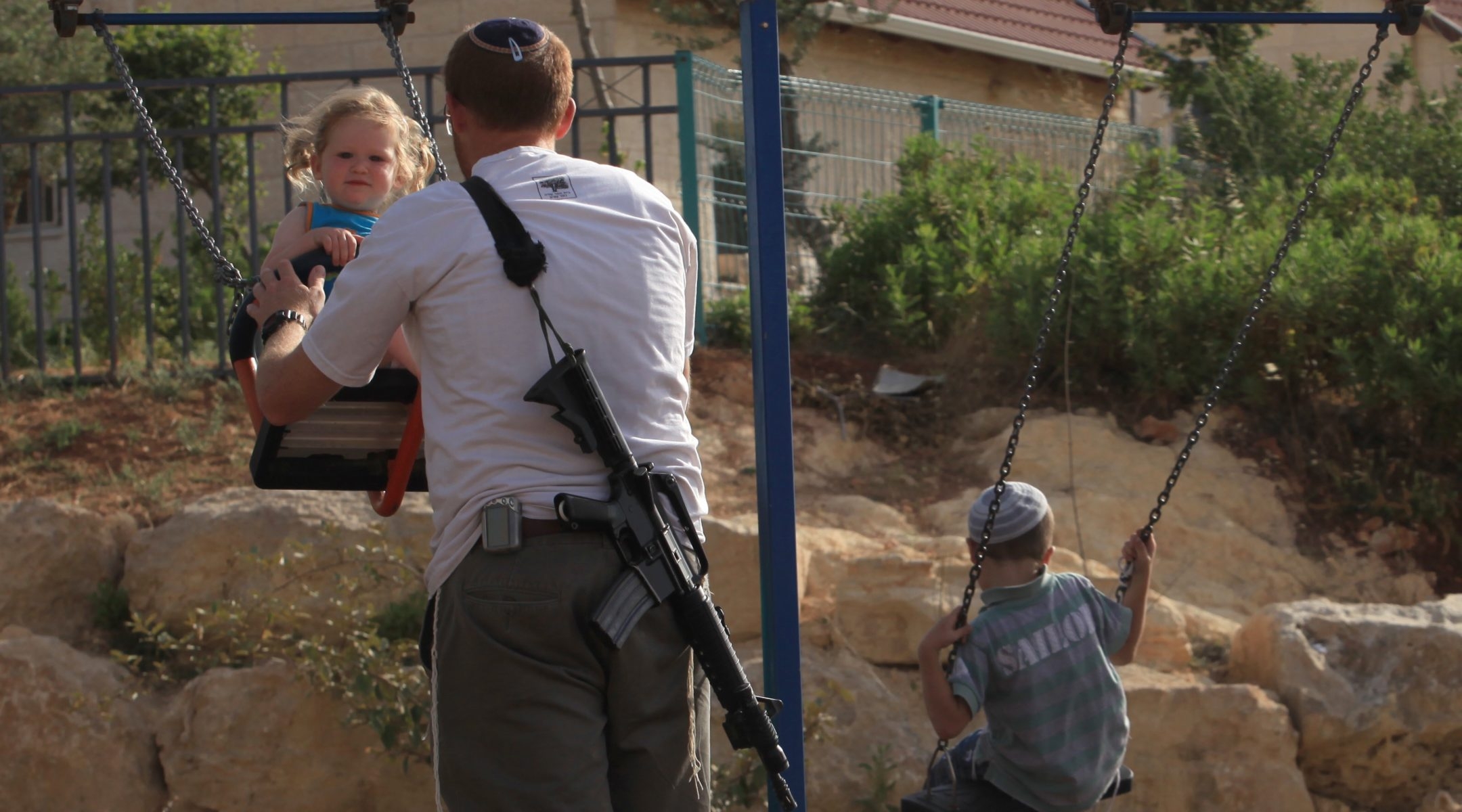 Officials say West Bank security has improved, but some settlers, including this father pictured in the Jewish settlement of Eli on June 10, 2009, carry guns for protection. (Nati Shohat / Flash90 / JTA)
Advertisement

“Get down,” he told the passenger in his car last week as he hunched behind the wheel, trying to steer beyond the range of Palestinian stone throwers who had already pelted the bus ahead of them.

Immediately he heard a large thud, the crashing of a rock into the side window. The window, made of reinforced plastic, did not shatter. About two more rocks hit the side of the car, causing damage but no injury.

Klavan, 41, had been en route from his job at a high-tech firm in Jerusalem to his home in the West Bank settlement of Karnei Shomron, about 11 miles from Nablus.

“It’s around the clock,” said Klavan, a member of the security committee at Karnei Shomron, who said his area has seen a noted rise in roadside incidents against Israeli cars.

Klavan said he found out later that just 20 minutes before his car was hit by rocks, there had been reports of numerous Molotov cocktails being thrown in the same area.

Near the settlement of Ofra, outside Ramallah, the largest Palestinian city in the West Bank, a there had been shooting attack earlier this month on an Israeli car.

“One of the signs that people are getting worried again is that they are putting in reinforcements in their cars,” said Ruchi Avital, an Ofra spokeswoman, referring to installation of reinforced windshields. “There is a sense that there is a rise” in incidents.

Overall, however, such attacks on West Bank roads have dropped markedly recently and in the past year, according to security officials working for the Yesha Council, the umbrella organization of Jewish settlements in the West Bank. But settlers say that such incidents, including sporadic infiltrations of their settlements, are a reminder of what they view as an ongoing threat of violence that is part of their daily lives.

“In general the security situation has greatly improved,” said Shlomo Oiknine, the Yesha Council’s chief security officer. “But on the other hand, because of the incidents we have seen this year, we need to be prepared for all possible scenarios.”

Regarding the violence on the roads, he said, “There are fewer incidents and the perpetrators are being caught more often than in the past.”

Meanwhile, Palestinians point to dangers they face in the uneasy balance of life in the West Bank, specifically from radical settlers. Attempts by the Israeli authorities to evacuate three illegal settlement outposts on Tuesday, for example, met with rampages on Palestinian land nearby, with fields set on fire and Palestinian vehicles reportedly pelted with rocks.

Some settlers insist they are the ones facing increased threats, linking recent violence on the roads to the recent reduction of military roadblocks. But Israeli army officials actually credit the improvement in the overall security situation to the easing of movement for Palestinians, as well as good military intelligence, the army’s ability to respond to terror threats and the West Bank security fence.

They also credit what they describe as the Palestinian Authority’s increased crackdown on Palestinian militants and improved ability to keep order in Palestinian-populated areas.

Lerner noted the relative lack of disturbances during the recent Gaza War, adding that “The Palestinian people in the West Bank today are more interested in their daily lives and trying to get things back on track.

“By removing checkpoints, we are removing friction and giving our forces more flexibility to operate, for example, on the ground in settlements themselves to help protect them and to provide more patrols,” he told JTA. “All of the checkpoints removed can be returned if the situation deteriorates. It’s not an irreversible move.”

In the past two years about 140 roadblocks and earth-mound obstacles have been removed. Where once there were 41 manned army roadblocks criss-crossing the West Bank and severely restricting the movement of Palestinians traveling between villages and cities, now there are 14, Lerner said.

Today the interaction between Israelis and Palestinians in the West Bank is largely limited to the some 30,000 Palestinians who work in the factories of Israeli-owned industrial parks or within the settlements themselves, usually finding employment in construction, maintenance, agriculture or service jobs.

Although Israelis and Palestinians share many of the West Bank roads, the army also has built a series of bypass roads used mostly by settlers and army vehicles that avoid Palestinian population centers.

Israelis are not allowed to enter Palestinian-controlled areas without an army escort out of concern that they could be attacked or even captured.

Avital, the Ofra spokesman, remembers the days in the 1980s before the outbreak of the first intifada when she and her neighbors would go to Ramallah on a daily basis — something no one has done in years.

“We would go to the banks there for the shorter lines, get our prescriptions filled in the pharmacies. If our local grocery store ran out of challah on a Friday, I knew I could pop into the supermarket in Ramallah and find Angel challot there,” she said, referring to the challah made by a well-known Jerusalem bakery.

Avital took fault with the Israeli government, which in her eyes is making dangerous concessions to the Palestinians in order to please the U.S. government.

Referring to the American pressure in the past, she said, “The result when we have relented has always been increased terrorism every single time.”

Avigdor Schatz, the head of a central region of the West Bank known as Binyamin, noted the new freedom of movement that has come with the lifting of so many roadblocks.

“Statistically there may be no increase in incidents, but there is a discomfort people are feeling in seeing Palestinians in places they were not permitted previously,” Schatz said. “There is a sense that something bad is afoot.”