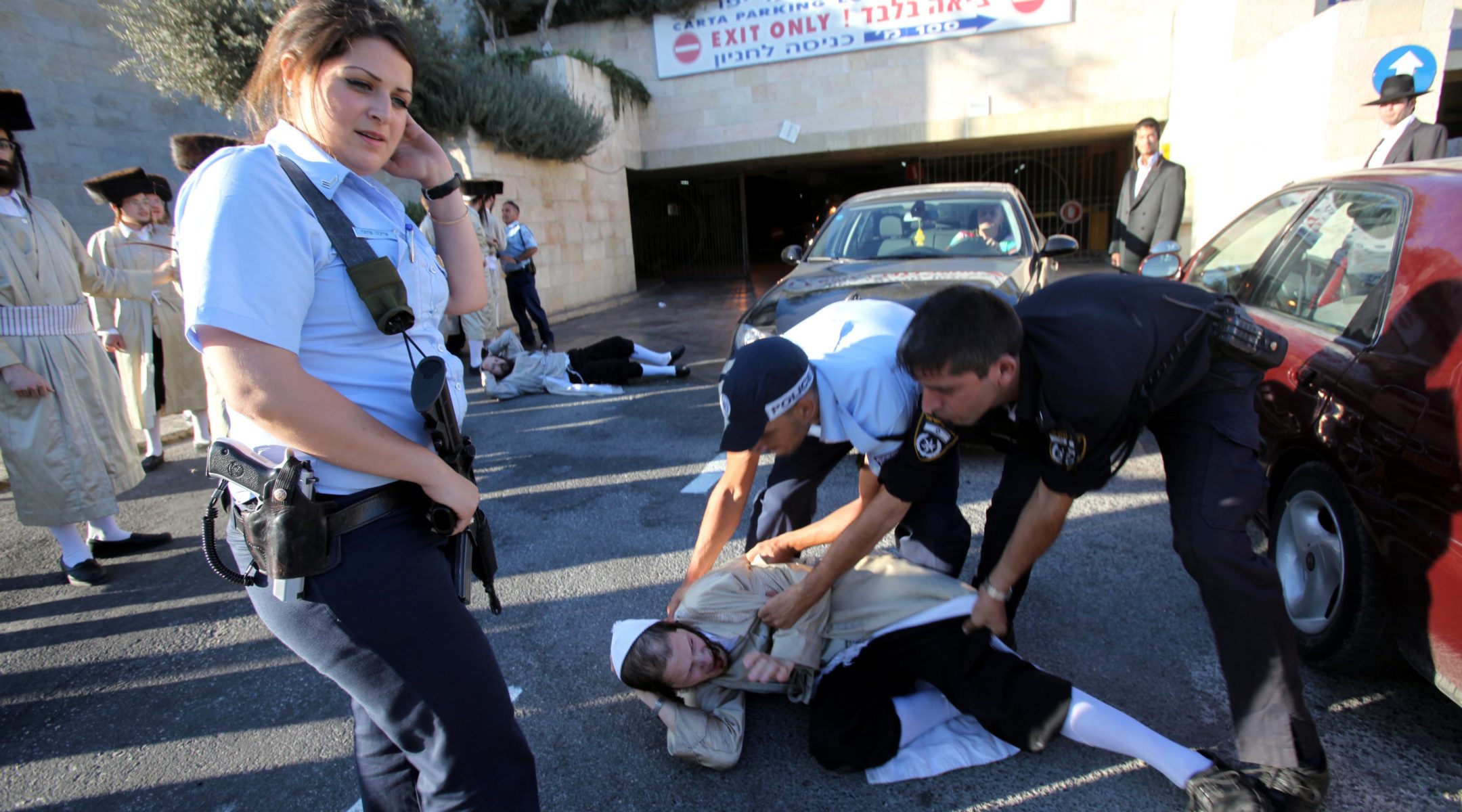 Fervently Orthodox protesters in Jerusalem scuffle with police as they try to block the entrance to a parking lot open on the Sabbath, July 25, 2009. (Yossi Zamir / Flash 90 / JTA)
Advertisement

NEW YORK (JTA) — It started as a scuffle last month between a small group of fervently Orthodox protesters and police over Jerusalem’s decision to open a parking lot in the city on Shabbat.

Soon, however, it turned into a standoff that pit Israel’s fervently Orthodox community against Jerusalem authorities, and included protests by some fervently Orthodox Jews, or haredim, against the arrest of a community member on suspicion that she starved her child. The child was taken away from her.

“We don’t have weapons, we don’t have tanks, we don’t have policemen or jails,” Shmuel Pappenheim, a spokesman for the protesters, told Army Radio, according to media reports. “But we are sending in our army.”

By the time the protests finally subsided in mid-July, the garbage-strewn streets of some Jerusalem neighborhoods resembled a battleground.

The violent nature of the protests highlighted a major difference that has emerged in the decades since Israel’s founding between haredi communities in Israel and those in the Diaspora: the willingness of some haredi protesters to resort to violence.

Experts are divided over reasons for the phenomenon.

“I think Jews in Israel feel like they’re the landlords,” Boaz Mori, the New York-born rabbi who heads the Lev Hatorah yeshiva in Beit Shemesh, Israel, told JTA in a telephone interview. “Even if we thought we were citizens in the Diaspora, a part of us always felt like we weren’t, so here we feel like we can say whatever we want and get away with it.”

“I suppose a case could be made that haredim are in fact more integrated into Israel than we think, and that the youth among them who are prone to acting out are less reluctant to do so in a Jewish state, even if they reject the very concept theologically, than Jews have been and are in non-Jewish lands, including even the United States,” Shafran said.

Most Israeli haredi leaders who reacted publicly to the protests condemned the violence, albeit not immediately, and said the violent protesters represented a fringe minority.

“In Israel they feel they have backing,” Friedman said. “Even when they are arrested they know everyone — all the Agudath Israel Knesset members — would rush to free them.

“Say what happened in New Jersey would have happened in Israel,” he said, referring to last week’s arrest of a number of noted rabbis in New Jersey and Brooklyn on suspicion of money laundering and corruption. “In Israel they would say it’s all lies and libels and they would throw stones and what-not.” But in America, Friedman noted, “They reacted to the news with profound silence.”

Bradley Burston, a columnist for Israel’s daily Ha’aretz, says the violence of the protests was a sign that haredi youth are becoming more Israeli.

“With the passing of generations,” Burston said, “haredi youth are taking on more of the language and outlook of sabras.”