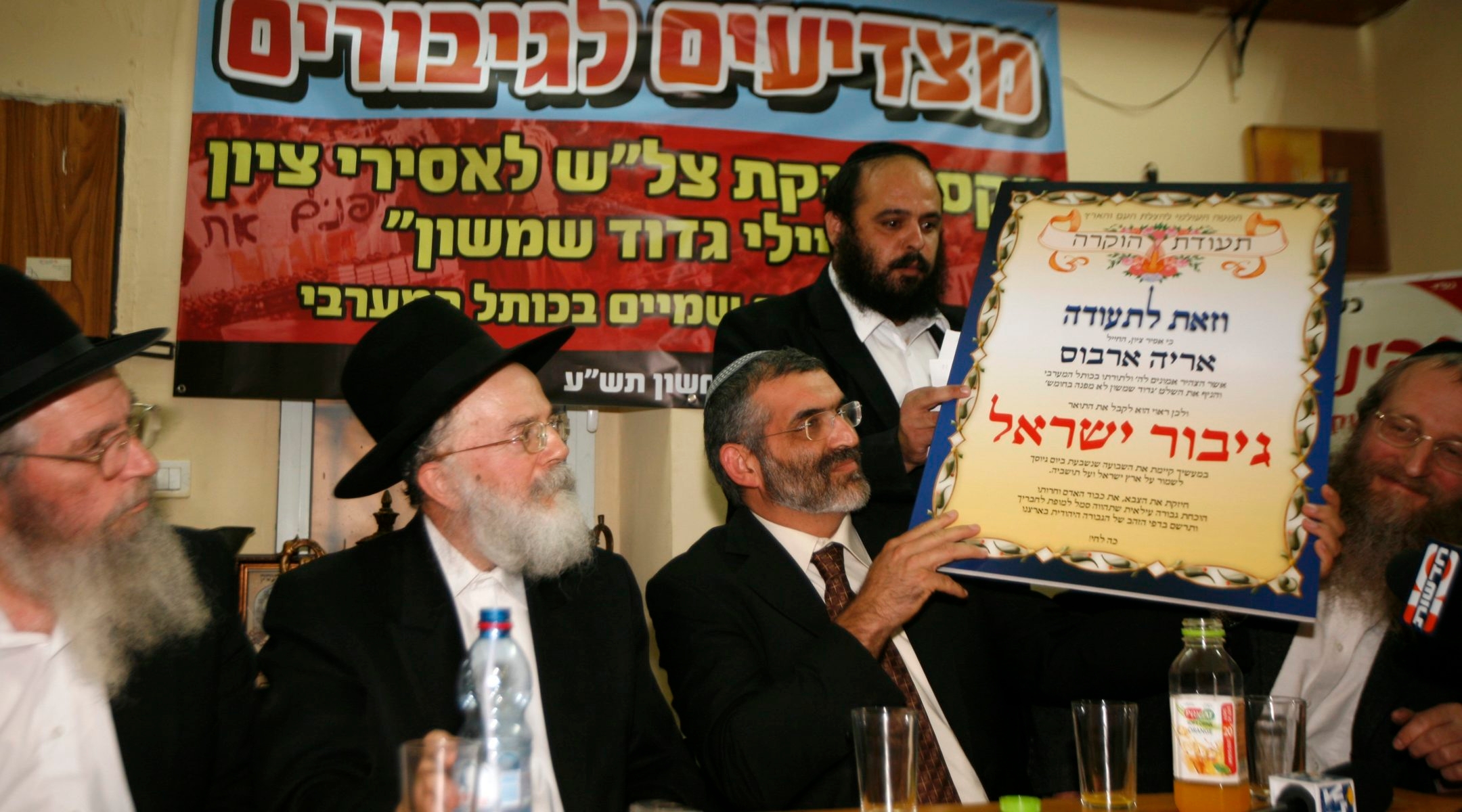 The incidents involved soldiers in the Kfir Brigade, which serves mainly in the West Bank and incorporates a sizable number of religious soldiers from Jewish settlements.

First, in late October, during a swearing-in ceremony at the Western Wall, two new Israeli army recruits raised a banner declaring that their battalion would not participate in the removal of squatters from Homesh, a settlement evacuated once before and to which would-be settlers keep returning in defiance of Israeli army orders to stay away. Reservists from their battalion backed the recruits with the argument that the army’s business was to defend the country and its people, not to evacuate settlers.

Three weeks later, in mid-November, six soldiers from Nachshon, another Kfir battalion, unfurled a banner reading “Nachshon does not evacuate either.”

In both cases, soldiers alerted the media and made sure that photographers were on hand at the critical moments, giving rise to speculation that their actions were not spontaneous but part of an orchestrated campaign by larger right-wing religious settler forces to render any planned Israeli withdrawal from the West Bank impossible.

Although still a minority phenomenon, threats by religiously observant soldiers to disobey orders to evacuate Jewish settlers raise fundamental questions about discipline in the Israel Defense Forces and Israel’s capacity to withdraw from the West Bank in the context of a future agreement with the Palestinians.

The politicians and the top military brass believe that if not stamped out quickly, the mood of defiance could spread, making it difficult for the army to function, as soldiers of various political persuasions pick and choose which assignments suit them. Some estimates reckon that if faced with orders to evacuate settlers, as many as 30 percent of soldiers stationed in the West Bank ultimately would refuse.

“If you want to close down the IDF, then promote refusal to obey orders, which could lead to the collapse of the state,” Prime Minister Benjamin Netanyahu declared. “We live on the strength of the IDF, and the IDF is based on the right to give and take orders.”

All the protesters against evacuation by the IDF were soldiers from Yeshivot Hesder, Orthodox theological seminaries, whose graduates receive a deferral from the military for Torah study and then enlist, mostly in combat units, for a shortened period of army service.

Some of the Hesder rabbis backed the protesters, arguing that for them to evacuate Jews was tantamount to a violation of their religious faith. Most, however, deplored the acts of protest in uniform as a serious breach of discipline.

In the same breath, however, they agreed with the substance of the protests: it was wrong for the IDF to be used against Israeli citizens and that its sphere of operation should be limited to defending the state.

Major theological issues also are at stake. Some Hesder rabbis and their students believe that Jewish settlement of and sovereignty over all of what was biblical Israel, including the West Bank, presage the coming of the Messiah. What, they ask, is more important: IDF discipline or divine redemption? A decision by the secular arms of state or the divine imperative to settle all the Land?

And in the event of a showdown, who to obey, the IDF commanders or the rabbinical authorities?

Most of the rabbis and settler leaders, however, prefer not to play up the attendant theological issues. Tactically they believe it far more astute to focus on what the IDF should and should not be doing. Here, they believe, there is more room for discourse with secular Israel, and perhaps even Knesset legislation that would make evacuation of the West Bank almost impossible.

Nearly all the leaders of the national religious Zionist camp have taken the same position, coming down strongly against refusal to obey orders in the IDF while arguing that the time has come to redefine the IDF’s proper functions.

The initial impetus for settling of the West Bank was at least partly to create irreversible facts on the ground. Now, with more than 400,000 settlers — compared to the 8,000 evacuated from Gaza — the sheer settler mass makes any large-scale evacuation a daunting prospect. And if, in addition, the army is barred from taking part, it is hard to see how Israel’s relatively small police force of approximately 25,000 could cope on its own.

For the Kfir Brigade protesters, the major accomplishment has been triggering a major debate over whether the IDF ought to be involved in evacuating civilians.

The doubts they have sown seem to be spreading among young recruits, secular and religious. And, in parallel, right-wing settler Knesset members, Tzipi Hotovely (Likud) and Arieh Eldad (National Union), have tabled a bill limiting the IDF’s operational sphere to defending the country, its citizens and its sovereignty, and specifically excluding police duties such as relocating settlers and settlements.

In the unlikely event of the measure being passed, it would undercut the thrust of current international Middle East policy and make implementation of a two-state peace deal with the Palestinians an unrealistic pipe dream. But even if it fails, the bill, like the Kfir Brigade protests, will sow further doubt about the legitimacy of IDF involvement in settler evacuation and thus make it that much more difficult to carry out such a policy.