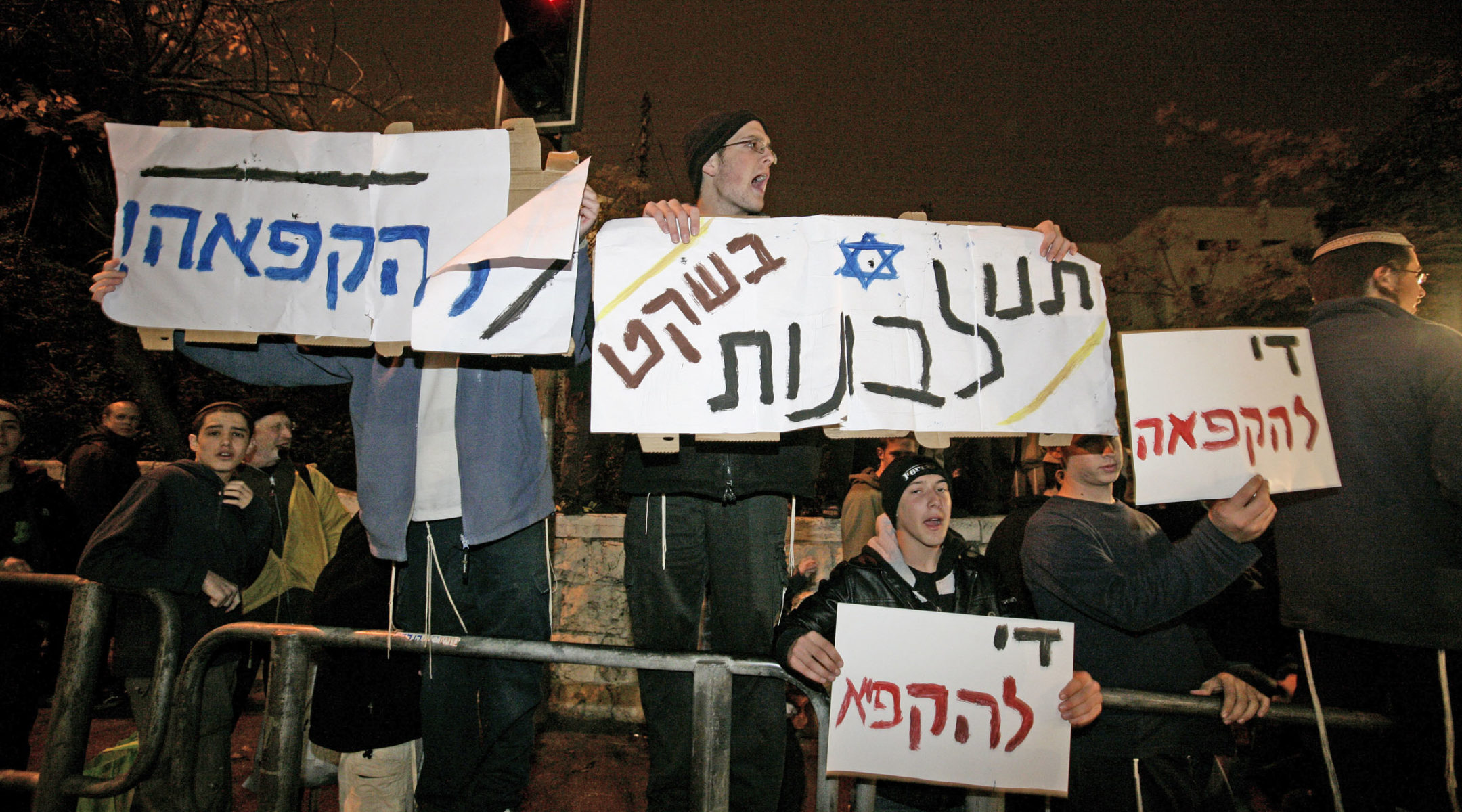 JERUSALEM (JTA) — In the wake of the Israeli government’s freeze on building in West Bank settlements, Jewish settlers are planning widespread protests and demonstrations, including blocking roads in Israel proper.

Their aim is to delegitimize the freeze decision among the public. The danger for the settlers, however, is if they are perceived as too extreme, their actions could actually hurt their public standing.

In a campaign reminiscent of actions by the far right in the aftermath of the Oslo agreements in the mid-1990s and the run-up to the Gaza disengagement in 2005, young radical settlers plan to keep the police guessing as they turn up randomly at major thoroughfares at different times to block the traffic.

Their first target was traffic to and from Jerusalem, where dozens of settler youths were quickly dispersed by police Monday after trying to block the main entrance to the city.

Settler youths also have been at the forefront of moves to harass government inspectors entering the settlements to issue warrants against further building. In several cases this has led to violent confrontations between settlers and police protecting the inspectors.

The worst settler violence, however, has been against Palestinians. In what they call “the price tag” policy, extremists attack nearby villages whenever they feel the government is trying to restrict settlement in any way. Over the weekend, settlers rampaged through the village of Einbus, near Nablus, torching vehicles and setting a home on fire.

Settler leaders have spoken out against violence.

Dani Dayan, head of the Judea and Samaria Settler Council, warned settlers Tuesday to keep the protest campaign free of violence, partly for moral reasons and partly in order not to alienate the vast bulk of non-settler Israelis.

But the settler leaders are not fully in control of the situation, and Prime Minister Benjamin Netanyahu has warned the settler community not to cross the fine line between legitimate protest action and open rebellion. And while the mood is not as ominous as it was in the days leading up to the Rabin assassination in 1995, the Shin Bet security service has intensified its already close protection of the prime minister.

Besides the protests and demonstrations, the settlers plan legal and political action against the freeze. They have petitioned the Supreme Court, arguing that the authorities had no right to implement a political freeze without the settlers first being given a hearing.

Their main hope, though, is in the political arena, where the settlers are banking on a rebellion within the Likud Party. Although the two most hawkish parties in the government, Yisrael Beiteinu and Jewish Home, have expressed deep sympathy for the settlers, they show no sign of bolting the coalition over the freeze.

Inside Likud, there has been a degree of unrest, as government ministers and Knesset members criticized the freeze as antithetical to party ideology. No one, however, has threatened to resign over it, and the chances of a full-scale rebellion within the party — like the one against Ariel Sharon over the Gaza disengagement in 2005 — are remote.

In 2005, Sharon found himself under attack from leading Likudniks like Uzi Landau and Netanyahu himself, who were ready to resign their ministerial posts to throw in their lot with the settler cause. That is not the case today, and there seems to be little likelihood of Netanyahu’s government being shaken by internal party ferment.

Nevertheless, given the threat, Netanyahu has been working hard to cultivate wide party support. He has been able to play on the trauma of the break with Sharon and to urge the rebels not to take action that again could split the party.

His second argument has been to stress that the freeze is for 10 months only and will not be repeated. On the contrary, Netanyahu says, as soon as it lapses, building will be resumed at an accelerated rate.

The prime minister also assured would-be rebels Sunday that there would be no second disengagement Gaza-style, and that the future of the West Bank would be decided only in a final peace deal with the Palestinians, who thus far are showing no interest in making peace.

Apart from the fact that no ministers or Knesset members have walked out on him, Netanyahu has received strong backing from some 50 of the Likud’s veteran mayors. His position in the party seems unassailable.

Despite all the settler agitation, the government has been unwavering in its determination to implement the freeze. It has taken satellite photographs of the region to make it easy to pick up any new building, and mobilized dozens of inspectors to monitor the situation on a daily basis. Seasoned officers in the Israel Defense Forces say that for the first time, the government has issued clear and serious instructions on how to implement a building freeze.

The big question, though, is how serious Netanyahu is about using the freeze as a springboard for cutting a deal with the Palestinians. Serious implementation of the freeze doesn’t necessarily mean serious strategic intent, and several leading pundits see the freeze as nothing more than a tactic to blame the Palestinians for failure to make peace. Netanyahu himself has hinted as much, adding that the freeze also was necessary to get America in Israel’s corner on other key issues, like Iran.

His message to the settlers seems to be to wait out the 10 months, during which time nothing will happen on the Palestinian front, and then, together with the government, they can go back to the business of settlement building.

The trouble is, the settlers don’t trust Netanyahu and fear that under pressure from the international community, he will sell them out and the freeze will serve to prepare public opinion for a territorial compromise with the Palestinians at their expense.