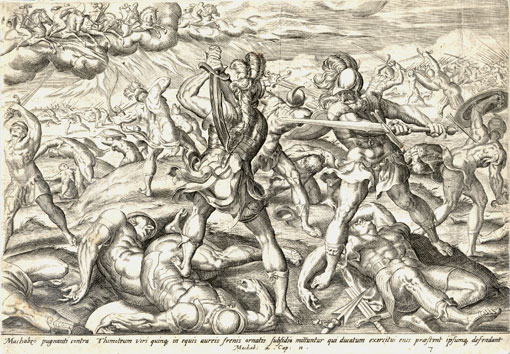 NEW YORK (JTA) — Some 2,200 years after the Maccabees’ revolt, historians and archaeologists are uncovering new information about their era.

This year’s biggest discovery is a correspondence between Seleukes IV, whose brother and heir was Antiochus IV Epiphanes of the Chanukah story, and one of Seleukes’ chiefs in Judea found on parts of an ancient stele.

Professor Dov Gera of Ben-Gurion University, who studied the stone’s inscription, said it confirms the account by the Jewish historian Josephus regarding the tightening grip of the Greek-Syrian empire over its subjects’ religious practices.

“[The text reveals] Seleukes appointed one of the members of his court as an official to oversee worship in the area and equate religious services throughout the empire,” Gera said. “Such an appointment might have been considered by the Jews to be offensive.”

In the book of Maccabees II, Josephus tells the story of a Greek-Syrian official in a similar position who tries to rob the Temple of its gold. The stele is believed to date from 178 BCE, just over a decade before Judah Maccabee rededicated the Temple in Jerusalem.

Assembling the stele and determining its origin required some detective work.

Gera received three fragments of unknown origin that surfaced on the antiquities market. Upon inspection he saw that they seemed to match the fragment of another stone that was missing text.

“When I got the three broken tablets, I saw it was part of another fragment that was already published,” he said.

Gera connected the fragments and saw that they matched. He concluded that the fragments must have been broken off the original stele, which was found in a cave in Israel’s Beit Guvrin area by grave robbers.

“I hope that the rest of the stele will be found because we are still missing the first part,” he said.