After Oren flap, Rosenthal focuses on anti-Semitism — for now 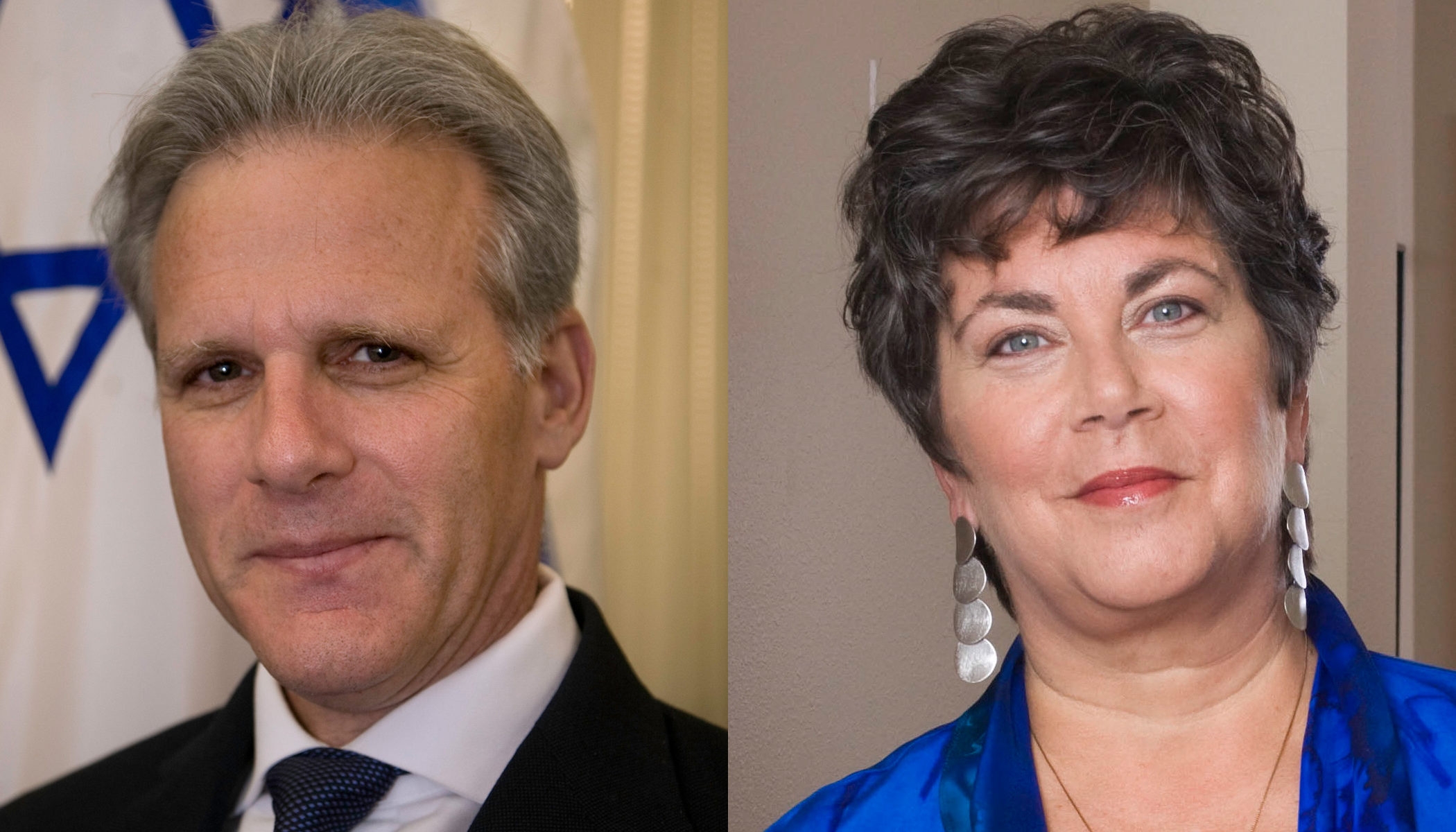 Michael Oren, the Israeli ambassador to Washington, and Hannah Rosenthal, the State Department's top official monitoring anti-Semitism, are at the center of the propriety of criticism of Israel and of groups that criticize Israeli policy. (Public Domain / Courtesy Hannah Rosenthal)
Advertisement

WASHINGTON (JTA) — Critics have a simple message for Israel’s top diplomat and the Obama administration’s envoy on anti-Semitism: Reread your job descriptions.

Every Israeli ambassador to Washington launches his tenure by assembling the Israeli and Jewish press and listing what he sees as his priorities: High among them, always, is outreach to U.S. Jews. But, less than a year into his tenure, Ambassador Michael Oren — who started his job with a speech stressing that priority — is being criticized by some left-wing organizations, such as Americans for Peace now and Ameinu, for saying that the lobbying group J Street was “fooling around with the lives of 7 million people.”

The position of U.S. Special Envoy to Combat and Monitor Anti-Semitism is a more recent invention, but its mandate is self-evident: Defend Jews, everywhere. But Hannah Rosenthal’s first media foray in her new role as envoy took the shape of an attack on Oren, a fellow diplomat. In a Dec. 24 interview, Rosenthal told Haaretz that it was “most unfortunate” that Oren had accused J Street, the left-wing pro-Israel group, of endangering Israel. Her comments prompted a sharp rebuke from Alan Solow, a longtime Obama backer and chairman of the Conference of Presidents of Major American Jewish Organizations.

The flap was the latest revelation of fissures between the Obama administration (backed by some left-wing Jewish groups) on the one hand, and Israel and its establishment U.S. Jewish defenders on the other.

The sniping is in abeyance for now: Rosenthal told JTA she is focused on combating what she sees as increasing anti-Semitism in Europe and the Arab world, and would prefer not to go over the recent back and forth.

Oren is in Israel and his embassy staff did not return requests for comment.

Solow, a staunch defender of Oren and Rosenthal’s most prominent critic, says he, too, sees the matter as now resolved.

In his initial, formal statement, Solow had said that some people were suggesting that Rosenthal’s comments “could threaten to limit her effectiveness in the area for which she is actually responsible.” But in his subsequent interview with JTA this week, Solow denied that he had been calling for Rosenthal’s professional head.

Rosenthal, without prompting, had almost the same message about keeping focused on her mandate. “It’s very important that people gather to talk about the anti-Semitism they’re fearing,” she said. “That’s my job — monitoring — but my job also says ‘combating.’ It’s important to expand the conversation to talk to other ethnic and religious groups.”

At the same time, Rosenthal was unapologetic about her comments on Oren’s slam of J Street — an organization she helped guide as a board member until her appointment last month to the government job.

“The reporter asked me about Oren’s comments, and I said that saying J Street threatens 7 million Jews was ‘most unfortunate,’” she said.

Rosenthal said that she was untroubled that in the wake of her interview Jeffrey Feltman, an assistant secretary of state, issued a statement praising Oren for his role “in maintaining and strengthening [the Israeli-U.S.] relationship through his day-to-day interaction with the administration and Congress on issues of vital importance to both countries and his vigorous outreach to Americans of all origins and points of view.”

The release of the Feltman statement was in itself unusual: It went out to two publications, Haaretz and Politico, and while officials at both the State Department and the White House confirmed its content to JTA, neither would provide the entire statement.

In her Haaretz interview, Rosenthal also veered off the topic of anti-Semitism to discuss Israel’s peace prospects, and she repeated the Obama administration’s mantra about urgent engagement. Her discussion of that subject raised as many official Jewish eyebrows behind the scenes as did her comments about Oren.

Rosenthal said Mideast peace issues are not unrelated to anti-Semitism, because one must know how to separate legitimate criticism of Israel from anti-Semitism.

Solow said he would continue to defend Oren because he was confident there was a consensus among the Conference of Presidents’ 50-plus member organizations that that Oren was making strides in improving U.S.-Israel relations, and that it was inappropriate for Rosenthal, an Obama administration official, to criticize him. Solow also said the Conference of Presidents did not have a view on Oren’s criticisms of J Street. Oren made his most recent anti-J Street remark to a conference of leaders of the United Synagogue of Conservative Judaism.

Behind the scenes, leaders of many Jewish organizations see J Street as fair game: Soon after it was created nearly two years ago, J Street drew attention by lobbing rhetorical bombs at establishment Jewish groups and figures, accusing them of impeding peace by withholding support for vigorous U.S. engagement in the Middle East.

J Street, whose officials were unavailable for comment on this story due to the holiday break, more recently has laregly refrained from sharp attacks on other groups.

The flap over Rosenthal and Oren’s comments appears to be part of a larger battle between the Jewish establishment, which still seeks the marginalization of J Street for its views on Israel, and the Democratic establishment, which embraces J Street’s pro-Obama approach to engagement.

One of the jarring aspects of this debate is that the sparring is coming from two figures not known for fighting. Prior to his appointment, Oren had a reputation as an affable scholar; in 2004, at a State Department conference on Israel’s intentions in its deadly attack during the 1967 Six Day War on the USS Liberty, he refused to be baited into name-calling by those who insisted that Israel was targeting the ship and stuck to his prodigious research. And, early on, after his appointment to the Washington post, Oren spoke of the need to reach out to U.S. Jewish groups that are critical of his government’s policies but are committed to Israel’s existence as a Jewish state.

Rosenthal, who served for years as the director of the Jewish Council for Public Affairs, was known as a consensus-builder for an umbrella group whose bottom line is consensus.

Perhaps not any longer. Asked if she was ready to put this behind her, she said yes, but added: “I don’t forget anything.”