Israel in Olympics to win, or not at all 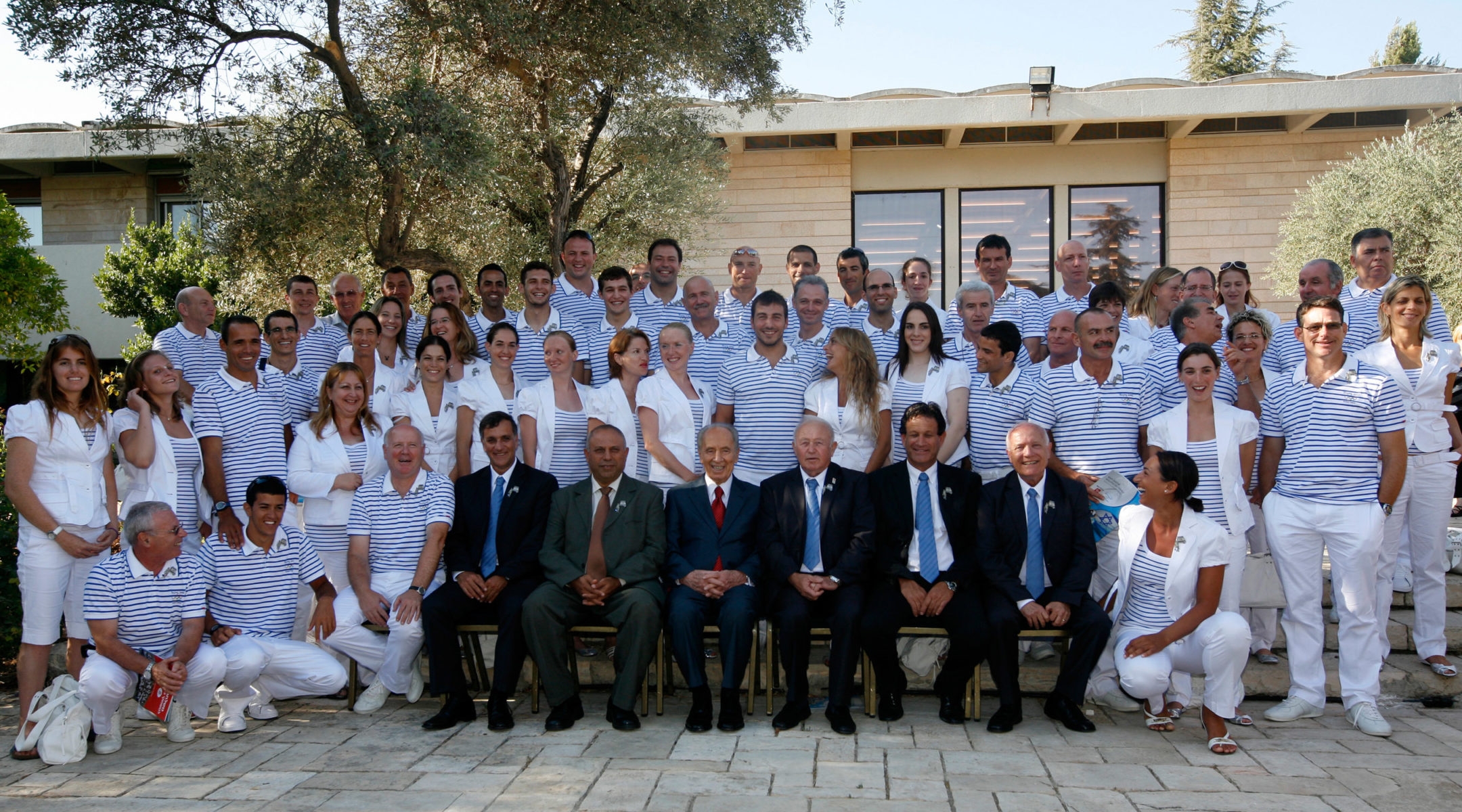 Israeli figure skater Tamar Katz qualified for the 2010 Winter Olympics in Vancouver, but did not meet the tougher standards of the Olympic Committee of Israel in order to participate. (Mark Goldfarb )

Alpine skier Michael Renzin, left, and the brother-sister ice-dancing team of Roman and Alexandra Zaretsky comprise the Israeli delegation for the Winter Olympics in Vancover, Canada. (The Olympic Committee of Israel / Flash90 / JTA)

Though she had qualified already in international competition for the 2010 Winter Olympics, the tougher standards of Israel’s Olympic Committee required that Katz finish in the top 14 in Europe to punch her ticket to the Winter Games in Vancouver. Katz said that while she felt weak before leaving for Estonia, she felt good when she took the ice.

But Katz made a mistake in her performance, missing her triple lutz-double loop combination, the highest scoring element in her program. She finished 21st — half a point away from qualifying for the finals, where her free skate routine might have propelled her into the top 14.

As a result, Israel is not sending Katz to Vancouver.

Stories like Katz’s are “heartbreaking,” acknowledges Efraim Zinger, secretary general of Israel’s Olympic Committee. But he adds, “In the end, you either did it or not.”

About a decade-and-a-half ago, Israel began applying demanding new standards to limit its Olympics delegation to athletes with a legitimate shot at a medal. Consequently, only three Israeli athletes will be competing this month in Vancouver – downhill skier Mikail Renzhin, and the brother-and-sister ice-dancing duo of Alexandra and Roman Zaretsky.

It is Israel’s smallest delegation to the Winter Games since 1998, when the nation also sent three athletes. Israel sent five athletes to each of the last two Winter Games — in Turin, Italy, in 2006 and Salt Lake City, Utah, in 2002. Israel’s first-ever appearance in the Winter Games was in 1994 in Lillehammer, France, when one Israeli athlete participated.

The policy of the Israeli Olympic Committee has proven controversial here.

“I think the Israel Olympic Committee should not be harder on the athletes than the International Olympics Committee,” Shlomo Glickstein, professional director of the Israel Tennis Association, told JTA. “It’s tough enough to get into the Olympics.”

In the lead-up to the Summer Games in Beijing two years ago, Israeli tennis star Dudi Sela was ranked 71st in the world — well within the top 100 required to qualify for the Olympics. But because Sela fell short of Israel’s own Olympic Committee standards — he needed to be among the top 50 in his sport to qualify — he was forced to stay home.

Zinger argues that while some Israeli athletes are left behind, the policy — which applies to the Summer Games, too — has enabled Israel to invest the lion’s share of its resources into the athletes the committee thinks have a chance at winning medals.

Until the late 1980s, Israel was sending teams “just to participate,” Zinger said. Now, he says, “We decided that we are going to win.”

Glickstein says the notion that the policy is about saving money is absurd, maintaining that it takes just a few thousand extra dollars to send an athlete to the Olympics — most of which is paid by sponsors.

Rather, Glickstein says of committee members, “They don’t want to be ashamed.”

Israel picked up its first two medals in the 1992 Summer Games, a silver and a bronze in judo, and has won five since, including a gold in sailing in 2004. All the medals have come in the Summer Games.

Katz is angry about being left behind.

“No country wants to take away a slot. They are usually happy to send their athletes,” she told JTA. “It is an honor for me to represent my country. I thought it would be the same for my country as well. I was shocked. I did everything to make it to the Olympics.”

A Facebook group called “Tamar Katz should be allowed to compete at the 2010 Olympics” has garnered more than 1,500 members by the beginning of February and generated hundreds of e-mails to the Israel Olympic Committee.

Born in the United States to Israeli parents, Katz lived in both Israel and the United States as a child. In Israel, she lived in the northern city of Metullah, near the country’s only ice skating rink. In the United States she lives and trains in Rockland County, N.Y., about 25 miles from New York City, and receives a stipend from the Israel Skating Federation.

Many athletes argue that merely appearing in the Olympics, even without winning anything, is a good way for younger athletes to gain experience for the next Olympics. But Zinger says Israeli athletes can get the same experience from appearing in other international competitions.

Last December, the committee decided on the goals and targets for the 2012 Summer Olympics in London. They include winning medals, improving the success rate of female athletes and attaining a medal in a sport that Israel has yet to master — namely, gymnastics.

As for the games that begin Feb. 12 in Vancouver, Zinger says that while the committee and Israelis in general would be thrilled to hear the national anthem “Hatikvah” sounded at a medal ceremony, they know that “Israel is not really a winter sport country.”