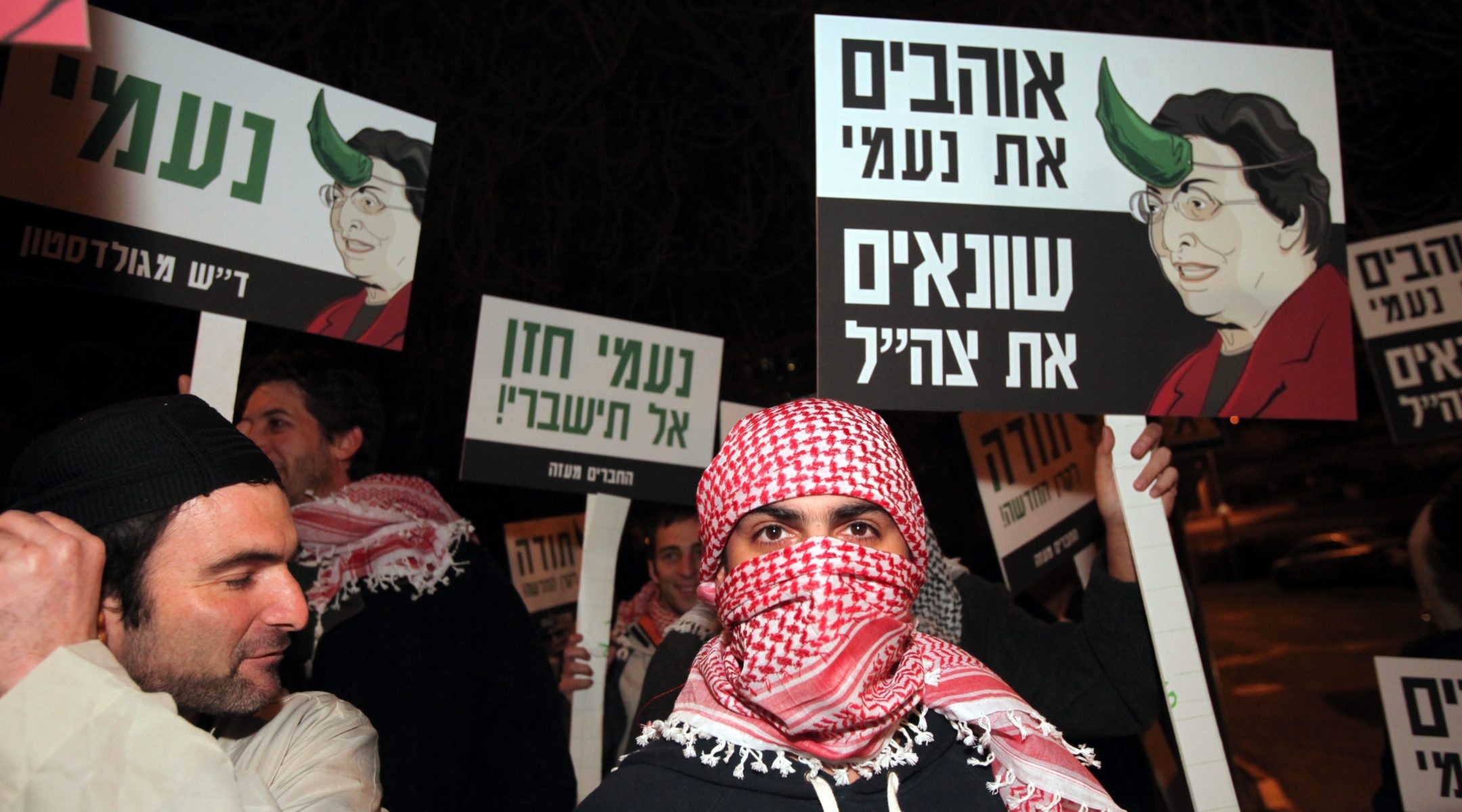 JERUSALEM (JTA) — A campaign against the New Israel Fund — a U.S.-based organization that funds civil society activists in Israel — has sparked a fierce debate over the limits of free speech, the financing of NGOs, the dictates of loyalty to the state and, ultimately, over the fundamental values of Israel’s Zionist democracy.

The questions cut close to the bone on both sides of the ideological divide. For example: Are left-wingers using Zionist money to undermine the foundations of the state? Or, are right-wingers trying to gag nongovernmental organizations critical of Israeli policies and actions? And to what extent are the government and its agencies involved in trying to silence their critics?

At the center of the storm is the Goldstone report on alleged Israeli war crimes during the fighting in Gaza last winter.

Most Israelis see the report as biased, based on flimsy evidence and false assumptions, and part of a concerted international campaign to delegitimize the Jewish state. The attack on the New Israel Fund was part of an angry Israeli backlash against Goldstone. But was it a bona fide attack on an organization accused of undermining Israel’s international standing or a premeditated onslaught against civil society?

The campaign against the NIF was conducted by an organization called Im Tirtzu, which describes itself as “an extra-parliamentary movement to strengthen Zionist values” and boasts a video endorsement from Prime Minister Benjamin Netanyahu. It claimed that 16 NIF grantees — among them Physicians for Human Rights and B’Tselem, human rights organizations active in the Palestinian territories; Breaking the Silence, a group of soldiers reporting on Israeli army violations of moral norms; and ACRI, the Association for Civil Rights in Israel — had provided Goldstone with material contributing to false charges against the Israel Defense Forces in informer-like actions that were tantamount to betrayal in a wartime situation.

“The results of these groups’ activities caused significant diplomatic damage to Israel and harmed the country’s capacity to defend itself militarily,” Im Tirtzu said, adding that NIF was largely to blame because it had funded these “anti-Zionist” organizations.

In late January, young Im Tirtzu members dressed as Hamas fighters demonstrated outside the Jerusalem home of NIF President Naomi Chazan waving placards depicting Chazan with a horn emerging from her forehead. The text on the placard read: “Fact! Without the New Israel Fund there could be no Goldstone Report and Israel would not be facing international accusations of war crimes.”

The horn was a play on words, the Hebrew “keren” meaning both fund and horn, but critics say it also had obvious anti-Semitic connotations that many found offensive.

The Zionist Organization of America has seconded the criticisms of the NIF.

The New Israel Fund says it knows that many of the minority rights groups it backs in the name of empowering the disenfranchised and fighting discrimination in Israel also take positions that the NIF does not endorse, such as calling for an end to Israel’s Jewish character. NIF officials say that while they do not agree with everything their grantees do or say, revoking their funding would be inimical to NIF’s goal of promoting free speech and strengthening Israel’s minorities.

“They’re using me to attack in the most blatant way the basic principles of democracy and the values of Israel’s declaration of independence; values of equality, tolerance, social justice and freedom of speech,” Chazan declared.

In dismissing the Im Tirtzu case against the NIF as baseless, Chazan said that the materials the groups allegedly transferred to Goldstone are mostly in the public domain. And even if they were not, it would be the duty of the groups to pass on what they know — that is their raison d’etre as human rights groups.

Far from giving succor to Israel’s enemies, the grantees were trying to create a better Israel, Chazan said.

The NIF and its defenders note that its work goes well beyond organizations focusing specifically on Palestinian rights. It also funds civil society groups dealing with a host of domestic Israeli issues, such as providing women’s shelters, supporting Ethiopian immigrants and challenging the Orthodox monopoly on Jewish religious practice.

In early February, a group of leading Israeli academics, writers, actors, directors and political activists, including novelists Amos Oz and A.B. Yehoshua, placed a full-page ad in Haaretz expressing “disgust at the campaign of incitement and hatred” being waged against Chazan, the NIF and the organizations it supports.

In late January, 13 of the 16 NIF grantees slammed by Im Tirtzu fired off a letter to President Shimon Peres, Prime Minister Benjamin Netanyahu and Knesset Speaker Reuven Rivlin complaining that the Im Tirtzu attack on the NIF was part of a larger pattern encouraged by “senior government officials.” In other words, it was more than a one-off campaign by a young, marginal group but part of an anti-democratic trend for which the government was setting the tone.

They gave some examples: Interior Minister Eli Yishai backing claims that organizations which help refugees and asylum seekers “aim to destroy Israel”; Netanyahu denying the legitimacy of Breaking the Silence testimonies on the Gaza war; Strategic Affairs Minister Moshe Ya’alon referring to Israeli human rights organizations as “enemies from within.”

Others see the specter of an impending clampdown against civil society.

Anat Hoffman, chair of Women of the Wall and director of the Reform movement’s Israel Religious Action Center, an NIF grantee, was questioned and fingerprinted by police in early January after taking part in an all-female prayer session at the Western Wall that involved the use of a Torah. A week later, ACRI director Hagai El-Ad was arrested while monitoring a protest against Jewish settlement in the Arab neighborhood of Sheik Jarrah in eastern Jerusalem, and released as soon as the case went to court.

Were these isolated cases of police folly or part of a pattern dictated from above?

There is no hard evidence to suggest that the Netanyahu government is planning to curb civil society or that the police action had the prime minister’s blessing. What is clear is that Netanyahu is deeply concerned by what he calls “Goldstonism” — moves in the international community aimed at delegitimizing Israel.

The prime minister says he sees three existential threats: Iran; a Palestinian state without adequate security arrangements; and rampant Goldstonism. That means that Israeli organizations the government feels contribute to delegitimization of the state could be seen as serious threats to national security. But the government does not seem to be considering operative moves against them.

Moves, however, are afoot in the Knesset.

The Law Committee, headed by Yisrael Beiteinu’s David Rotem, whose party has proposed that Israeli citizens take loyalty oaths, has set up a subcommittee to examine the sources of funding of NGOs active in Israel. Some of the committee members aim to ban funding by foreign countries, which is seen as interfering in Israel’s internal affairs. Most of that funding is from European countries for left-wing NGOs.

Otniel Schneller of the Kadima Party wants to go a step further, proposing the establishment of a full-fledged parliamentary commission of inquiry to probe the conduct of the NIF and its grantees. Schneller says he is against the absurdity of Israeli civil society “paying organizations like Physicians for Human Rights to slander us,” and wants to stop the NIF from supporting anti-Zionist groups.

Schneller’s proposal, which he plans to submit next week, has run into stiff opposition from the left and right.

Left-wing Meretz leader Haim Oron asked who would decide who is a Zionist or what are Israel’s best interests. Schneller, he suggested, should fight the left-wing organizations with counter arguments, not try to cut off their funding.

On the right, the Likud’s Michael Eitan argued that parliamentary commissions of inquiry are established on non-political issues, such as corruption in soccer or water prices.

“It is unheard of for the majority in the Knesset to investigate the minority,” he fumed.

Eitan’s stand has the support of others in the Likud, like Rivlin and Minister without Portfolio Benny Begin, and it is not clear whether Schneller can muster a majority for his proposal.

Liberal organizations and bloggers have been reporting that Im Tirtzu has received money from the Central Fund of Israel, a U.S.-based nonprofit that has also supported pro-settler organizations and a group that aids militant Israeli Jews accused of carrying out violence. They also note that Im Tirtzu reportedly has received $200,000 over the past two years from John Hagee, an evagelical pastor in San Antonio, Texas, who is staunchly pro-Israel but came under fire for having declared in a sermon that God allowed the Holocaust to happen as part of a plan to bring Jews to Israel.

Hagee has expressed regret for the upset caused by his remarks and promised to be more sensitive in the future. A spokesman for the pastor criticized the tenor of Im Tirtzu’s campaign against NIF.

Meanwhile the debate goes on, with each side seeking to claim the mantle of preserving Israel’s fundamental nature.

Im Tirtzu leader Ronen Shova countered that “The debate is not about left or right. The new debate is between Zionists and non-Zionists.”