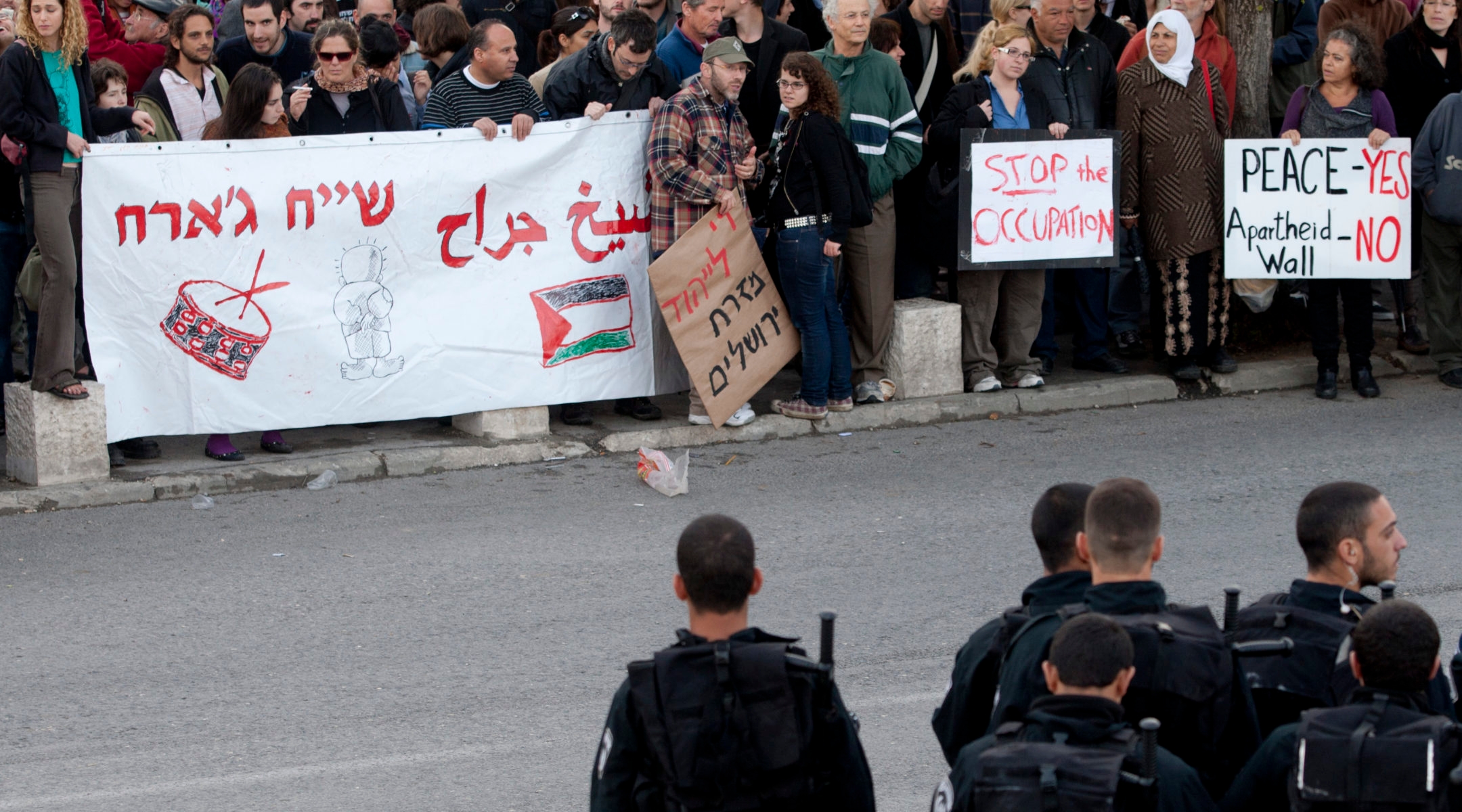 Caption: Israelis and Palestinians protest the eviction of Palestinian families from a pair of Jewish-owned buildings in the eastern Jerusalem neighborhood of Sheik Jarrah, March 26, 2010. (David Vaaknin / Flash 90 / JTA)
Advertisement

JERUSALEM (JTA) — The day that Zacharia Zigelman, 26, moved into a home in the Arab neighborhood of Sheikh Jarrah, in eastern Jerusalem, he got beaten up, he says.

“You get used to it,” Zigelman said of the incident, which occurred about six months ago.

Zigelman, his wife and 5-month-old son are one of seven Jewish families living in two buildings from which members of an extended Palestinian family were evicted last summer after Israel’s Supreme Court determined that the property was owned by a Jewish group called Nachalat Shimon. Several members of the al-Kurd family continue to live in a wing of one of the homes, which has only added to the tension.

The home is one of several in the neighborhood that Jews and Arabs are fighting over.

So far, three Palestinian families have been evicted from their homes in the neighborhood, and Israel’s Supreme Court has ruled that four other Arab families must vacate their homes. Six other cases are under deliberation, and two additional claims were filed last week by Nachalat Shimon, which purchased title to the 4.5-acre property from its original Jewish owners several years ago.

Protesters have staged frequent demonstrations in front of the homes now occupied by the Jews. At times, violent riots have erupted, leading to the arrests of Palestinian and left-wing demonstrators. The new Jewish residents and counter-demonstrators have also been accused of incitement; in one case, Jewish teenagers tore down a courtyard fence erected by the al-Kurds.

The dispute in Sheik Jarrah is one of many pitting Arab against Jew in the battle over eastern Jerusalem. Increasingly, this battle is the subject of international scrutiny and — when it comes to Jews moving into eastern Jerusalem — widespread condemnation.

In Israel, it is the projects to settle Jews in predominantly Arab neighborhoods like Sheik Jarrah that have proven most contentious. Overseas, any effort to house Jews across the Green Line — the line that divided Israel from Jordan between 1948 and 1967 — has proven controversial lately.

Tensions between the Obama administration and Israel reached an all-time high last month following an announcement during a visit to Israel by Vice President Joe Biden that Israel planned to build 1,600 new housing units in the ultra-Orthodox neighborhood of Ramat Shlomo.

Home to approximately 18,000 residents, Ramat Shlomo is one of many Jerusalem neighborhoods that today are fully Jewish but were built on vacant land Israel captured in the 1967 war and annexed in 1980. Most Israelis believe in Israel’s right to build on this land without restriction, considering it distinct from Jewish settlements in the West Bank, which Israel never annexed. But U.S. officials and others around the world do not recognize that distinction, calling Jewish neighborhoods built in the 27 sq. miles of eastern Jerusalem — including Gilo, East Talpiyot, Pisgat Ze’ev and Ramot, where Ramat Shlomo is — settlements. Prime Minister Benjamin Netanyahu did not include the neighborhoods of eastern Jerusalem in the 10-month settlement construction freeze he began last November.

Perhaps the most controversial method by which Jews have moved into eastern Jerusalem has been through the use of the 1950 Absentee Property Law, which allowed Israel to seize the property of Arabs who fled Palestine to enemy countries during Israel’s War of Independence and didn’t return by Sept. 1, 1948. After Israel captured eastern Jerusalem from Jordan in 1967, this law was also applied to Palestinian property there — meaning that properties in the area owned by Arab families living elsewhere could be subject to seizure without compensation.

Application of the law in eastern Jerusalem “opens a Pandora’s box of the Palestinian and Israeli property issue,” says Tali Nir, an attorney for the Association for Civil Rights in Israel (ACRI). “This is a huge violation of their basic rights for shelter and dignity, and of their property rights.”

According to Ir Amim, an Israeli group that advocates for Palestinian rights in Jerusalem, the Absentee Law also has been used to expropriate sizeable parts of the Arab neighborhood of Silwan, which were then given over for construction of the City of David, a Jewish archeological site and visitor’s center. Located downhill from the Old City, some 2,600 Palestinian families and about 70 Jewish families live in the 30-acre area.

The dispute over the homes in Sheik Jarrah, where Palestinian families are being evicted for non-payment of rent to the properties’ Jewish owners, has proven no less contentious.

The homes under dispute sit on a 4.5-acre parcel owned by Jews during the Ottoman era that came under Jordanian rule when eastern Jerusalem fell to Transjordan during the 1948 war. Between 1948 and 1967, 28 Palestinian refugee families that fled Israel during the 1948 war were settled on the property in exchange for paying a symbolic rental fee and ceding their refugee status.

In the early 1980s, years after the area was captured by Israel in the 1967 war, two Jewish organizations came forward with Ottoman-era documents showing the property belonged to them. Israeli courts upheld the documents’ authenticity, which Arab groups maintain are forgeries. In 1982, an attorney for the Palestinian families living on the property inked a deal with the Jewish owners under which the Palestinian families would remain protected tenants as long as they continued to pay rent.

But most of the families refused to pay the rent in part because it would recognize the Jewish groups as the rightful owners of the property, and because the families believed the United Nations had promised the land would be registered in their names after a certain number of years, according to Orly Noy, spokeswoman for Ir Amim.

Nachalat Shimon reportedly plans to raze the existing buildings and create a 200-apartment enclave for Jewish families in the Arab neighborhood.

It’s not the only property in Sheik Jarrah owned by Jews. American Jewish businessman Irving Moskowitz purchased the Shepherd’s Hotel area with the intention of turning it into about 20 apartments for Jewish families. That plan has been approved by Jerusalem municipality housing and planning committees.

Stephan Miller, spokesman for Jerusalem Mayor Nir Barkat, told JTA that City Hall does not get involved in issues of ownership. These disputes, he said, “are addressed in the courts of law, not by politicians.”