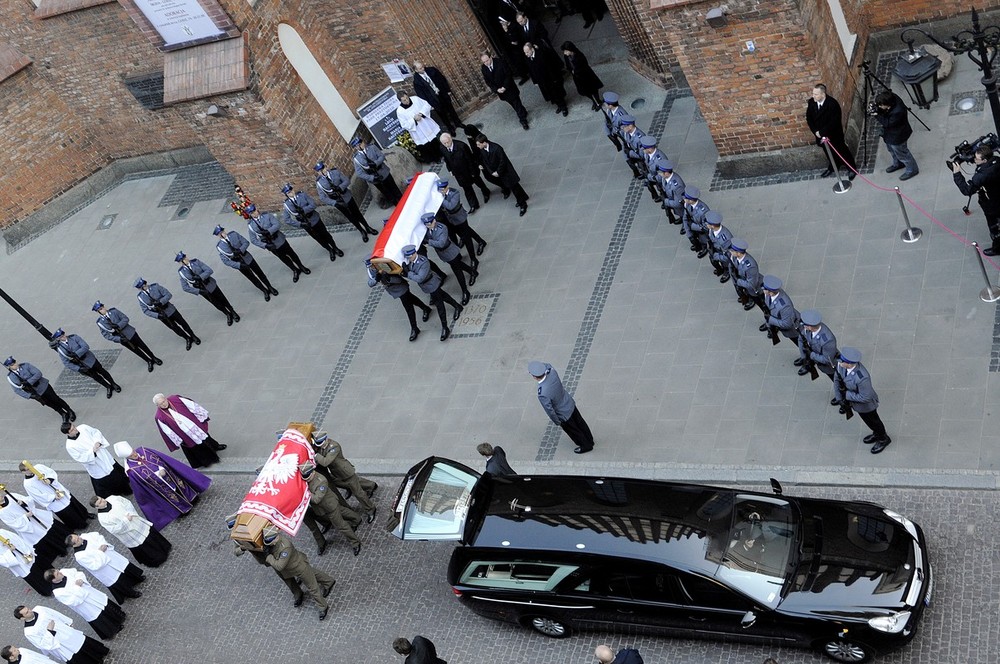 ROME (JTA) — The Jewish reaction to the death of Polish President Lech Kaczynski and dozens of other senior Polish officials in an air tragedy highlights a remarkable change in how the Jewish world views Poland.

The prayers, public statements and personal tributes, including a special remembrance during the March of the Living, were normal expressions of grief and solidarity for a close friend and ally — in short, heartfelt sentiments that probably could not have been made 20 or even 15 years ago.

Poland looms large in the collective Jewish consciousness. Huge numbers of North American Jews trace their ancestry to Poland, and before World War II Poland was Europe’s Jewish heartland. Some 3 million Polish Jews were killed in the Holocaust.

Until fairly recently, however, much of the Jewish world regarded Poland as little more than a vast, anti-Semitic Jewish graveyard. These attitudes were exemplified in 1989 by Israel’s then-Prime Minister Yitzhak Shamir, who famously declared that Poles “suck in” anti-Semitism “with their mother’s milk.”

Today, however, Poland is one of Israel’s best friends, and Jewish leaders hailed Kaczynski and others on the doomed plane for their dedication in helping write a new chapter in Polish-Jewish relations. Kaczynski was buried Sunday.

This change in Jewish attitudes by no means came overnight. It was the fruit of a deliberate, sometime rocky post-communism Polish policy aimed at convincing the Jewish world that Poland — and Poles — could be trusted partners.

This included organized outreach, Poland’s emergence as an ally of Israel and extensive Polish interaction with international Jewish organizations on both a formal and informal basis. In 1995, the Polish government even established the unprecedented post of roving ambassador to the Jewish Diaspora to foster contacts and provide a conduit for communications.

Meanwhile, lacerating public debates in Poland over anti-Semitism and the Polish role in the Holocaust, sparked by several books and films, also demonstrated to the Jewish world a willingness in Poland to tackle these troubling issues.

“Jewish attitudes became more positive as the world began to recognize Poland as a modern democratic nation rather than the apocryphal place of our ancient sufferings,” says Michael Traison, a Jewish American lawyer who has maintained an office in Poland since the mid-1990s. “And attitudes were impacted by the growth of information flowing out of Poland to the Jewish world as people learn that ‘Am Yisrael chai’ [the Jewish people lives], even in Poland.”

Jewish figures themselves played key roles by demonstrating their own openness to Poland and highlighting the revival of contemporary Jewish life in the country.

Shevach Weiss, a Polish-born Holocaust survivor and former speaker of the Israeli Knesset, became a popular and even beloved figure among locals as the Israeli ambassador to Poland from 2000 to 2004.

I’ll never forget seeing him plunge into a crowd of 10,000 frenzied fans, most of them Catholic Poles, who crammed into the main square of Krakow’s old Jewish quarter, Kazimierz, for the final concert of the annual Festival of Jewish Culture in 2002.

The Krakow Festival and the new Museum of the History of Polish Jewry under construction in Warsaw also have won enthusiastic American supporters. Poland’s American-born chief rabbi, Michael Schudrich, has been tireless in spreading the word that a small but living Jewish community exists in Poland.

Organizations such as the San Francisco-based Taube Foundation and the American Jewish Committee now make it a point to bring Jewish groups to Poland not just to commemorate the Holocaust but to take part in Jewish cultural events and meet local Jews and Catholic Poles.

“The story of Judaism in Poland did not end with the Holocaust,” promotional material for Taube-led tours says.

What all this means is that after decades of looking at Poland through a lens tinged darkly with tragedy and distrust, Jewish leaders increasingly are willing to demonstrate belief that Poland has changed. Or at least is changing.

To be sure, this does not mean that Polish anti-Semitism has vanished; on the contrary. It does recognize, however, that other forces are in play, too.

To someone like me, whose relationship with the Jewish experience in post-Holocaust Poland goes back nearly 30 years, this change of attitude is as dramatic as it is welcome. It remains to be seen, though, how far it has trickled down.

An American Jewish friend here in Italy, who first told me the news about Kaczynski’s death in the plane crash, was surprised when I expressed dismay.

“I don’t know anything about him except that he’s an anti-Semite,” my friend said.

An Israeli Facebook friend wrote: “I wish that Poles — who indeed suffered a grievous loss in the plane crash that killed its leadership — felt the same sense of loss over the 3 million Polish Jews murdered in their country, often at the hands of the Polish people.”

Still, I was moved and encouraged by the homage paid to Kaczynski by the 10,000 participants of this year’s March of the Living, the annual youth gathering that commemorates Holocaust Remembrance Day with a ceremony at Auschwitz-Birkenau.

Back in 1994, when I was the cultural guide for a March of the Living group, the youngsters I was with spent their last evening in Poland acting out anti-Polish skits. Their handbook took for granted that the youngsters would feel nothing positive toward local Poles.

“We will hate them for having participated in atrocities, but we will also pity them for their woeful living conditions today,” it read.

But at this year’s March of the Living, young participants wore black armbands to honor Kaczynski and the other crash victims.

“We join our Polish brothers and sisters in their time of sorrow, and express our deepest sympathies for their loss,” a statement from the March of the Living said. “Our thoughts, hopes and prayers are with them during this difficult time.”