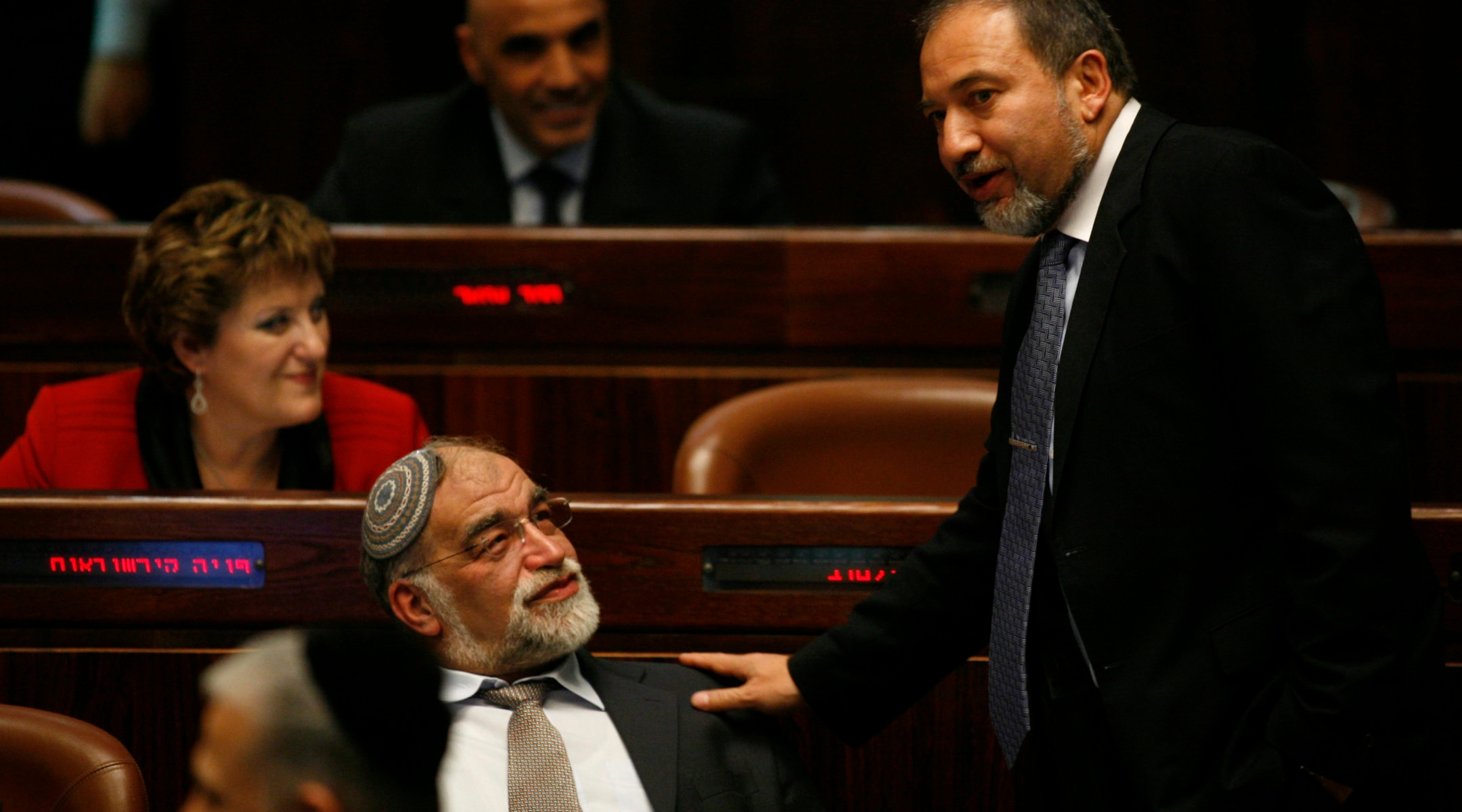 NEW YORK (JTA) – If Knesset member David Rotem has his way, Israel will enact a new law to make it easier for non-Jewish Israelis to convert to Judaism.

This will have the effect of better integrating tens of thousands of Israelis of Russian extraction, if not hundreds of thousands, into Israeli Jewish society, according to Rotem and Israeli Deputy Foreign Minister Danny Ayalon, whose party, the Russian-dominated Yisrael Beiteinu, is sponsoring the bill. Most important, they say, the measure will make it easier for the Russians to marry other Israelis.

“This is not a one-time placebo but a real, serious effort to keep the Jewish people together,” Ayalon told JTA.

But critics, including some Diaspora Jews and non-Orthodox leaders in Israel, are not happy with the proposal. They say the bill does not go far enough to ease the conversion process, expands the power of the Chief Rabbinate, delegitimizes non-Orthodox conversions and does nothing to secure recognition in Israel for conversions performed in the Diaspora.

The objections are part of what prompted a U.S. explaining tour this week by the two legislators from Yisrael Beiteinu, whose leader, Foreign Minister Avigdor Lieberman, promised in the last campaign to tackle marriage and conversion issues. Rotem and Ayalon spent three days visiting American Jewish organizational leaders in a bid to allay concerns about the proposed bill.

The point of the tour, Ayalon explained, was “to alleviate any concerns from our brothers and sisters in the Conservative and Reform movements that they would be adversely impacted by any form of the bill.”

Rotem and Ayalon also met with the Orthodox Union and federation executives, among others, to discuss the proposed legislation.

“I want them not to worry it’s going to harm them,” Rotem said. “This law doesn’t deal with conversions done abroad. We have to solve an internal Israeli problem.”

Rabbi Uri Regev, a leading Reform rabbi in Israel and now president of Hiddush, a group that advocates for religious freedom in Israel, says that American Jewish leaders should not be distracted from the real harm the bill does in Israel.

“The devil is in the details,” Regev said. “What he’s not telling you is that the bill would result in serious ramifications in terms of the legal status of converts in general, of non-Orthodox converts in particular, and will not provide Russian olim with the kind of access and protection he claims.”

The conversion bill aims to address several problems with the status quo in Israel, according to Rotem, the chairman of the Knesset Constitution, Law and Justice Committee.

In the 1990s, hundreds of thousands of people from the former Soviet Union immigrated to Israel under the Law of Return, which grants the right to Israeli citizenship to anyone with a Jewish grandparent. While most of the Russian-speaking immigrants were Jewish according to halachah, or Jewish law, many did not have a Jewish mother and so were classified in Israel as non-Jews. That has led to all sorts of problems for the estimated 350,000 to 400,000 Israelis in this category, particularly when it comes to marriage, which is controlled by religious authorities.

Israeli law makes no accommodation for civil marriage, whether between a Jew and a non-Jew or between two people of no religion. So the only way these Israelis can wed is if they convert to Judaism — no easy process in Israel.

Would-be converts must take classes, pass exams and pledge to be religiously observant, and the approval for conversions is subject to the whims of special conversion courts. Complicating matters further, rabbinical courts in Israel in the past two years have invalidated a number of conversions performed years ago, casting doubt on thousands more conversions and provoking a firestorm of controversy. The Israeli Rabbinate also has circumscribed acceptance of conversions performed overseas, including Orthodox conversions, rankling Diaspora rabbis.

Rotem says his bill would address some, but not all, of these problems.

The measure would empower any rabbi who is or was on a district rabbinate in Israel, or was or is the chief rabbi of a city or town, to perform a conversion for any Israeli regardless of place of residence. This would free would-be converts from the whims of the special conversion courts. It also would eliminate the current curricular requirements for converts, instead leaving conversion to the discretion of local rabbis.

Under the proposed law, conversions could be voided only if the rabbinical court that conducted the conversion determined it took place under false pretenses, subject to the approval of the president of the national Rabbinic Court of Appeals. And under Rotem’s proposal, a convert seeking to marry but encountering obstinacy at his local rabbinate could return to the rabbinical court that converted him to acquire his marriage license.

A few months ago, Rotem managed to get a separate bill passed to enable couples with no religion to enter into civil unions. Critics complain, however, that the law’s limitation to couples of no religion limits its impact to some 100-200 couples in Israel per year, and that it leaves unclear whether these unions will be recognized overseas as marriages. The bill does nothing to help interfaith couples, who are barred by law from marrying in Israel, or Jews who want to get married civilly rather than through the rabbinate.

Rotem says the conversion bill is essential for Israel’s future. Without it, he warns, the non-Jewish, non-Arab population of Israel will swell to 1 million by 2035.

“There is a historic opportunity here to solve and dismantle a ticking time bomb that when it explodes, we in Israel won’t know what to do with ourselves,” Rotem told JTA.

Regev, a staunch critic of the bill, says that while well meaning, the measure contains several dangerous provisions. For one, it expands the Orthodox-dominated Chief Rabbinate’s jurisdiction by bringing conversions, until now the province of special conversion courts, under the explicit authority of the Chief Rabbinate.

For another, it requires the consent of the president of the nation’s Rabbinic Court of Appeals for a conversion to be revoked. While that might be an improvement over the current situation, in which lower rabbinic courts are unilaterally voiding conversions, it also raises the specter that the position could be taken up by a fundamentalist who would take a tougher line against converts. Rabbi Shlomo Amar, who is seen as a relative moderate, occupies the post until 2014.

Moreover, the conversion bill does not guarantee that rabbinates in Israel will recognize conversions performed overseas. While Israeli law recognizes such conversions as valid, in practice Israeli rabbinates often disregard them and bar such converts from marrying Jews — particularly in the case of non-Orthodox conversions.

Rotem dismisses this problem, saying that a convert from the United States always can find some rabbinate in Israel willing to grant him a marriage license — it’s just a matter of “legwork” going from city to city to find one.

Regev says this is ridiculous.

“Instead of allowing people to marry as they see fit, with the starting point being freedom of marriage, there are acrobatics when the chief rabbi of the city makes problems for a convert who wants to marry,” he said.

This scenario also opens the door for fundamentalist rabbis to exercise whatever coercive power they can — from ostracization to intimidation — to compel members of lenient district rabbinates to fall into line.

Just how liberal a district rabbinate can be in Israel remains to be seen. They are exclusively Orthodox and frequent battlegrounds between moderate and fundamentalist Orthodox rabbis.

Ultimately, Rotem acknowledges that his bills may not go far enough, but says they are an improvement over the status quo.