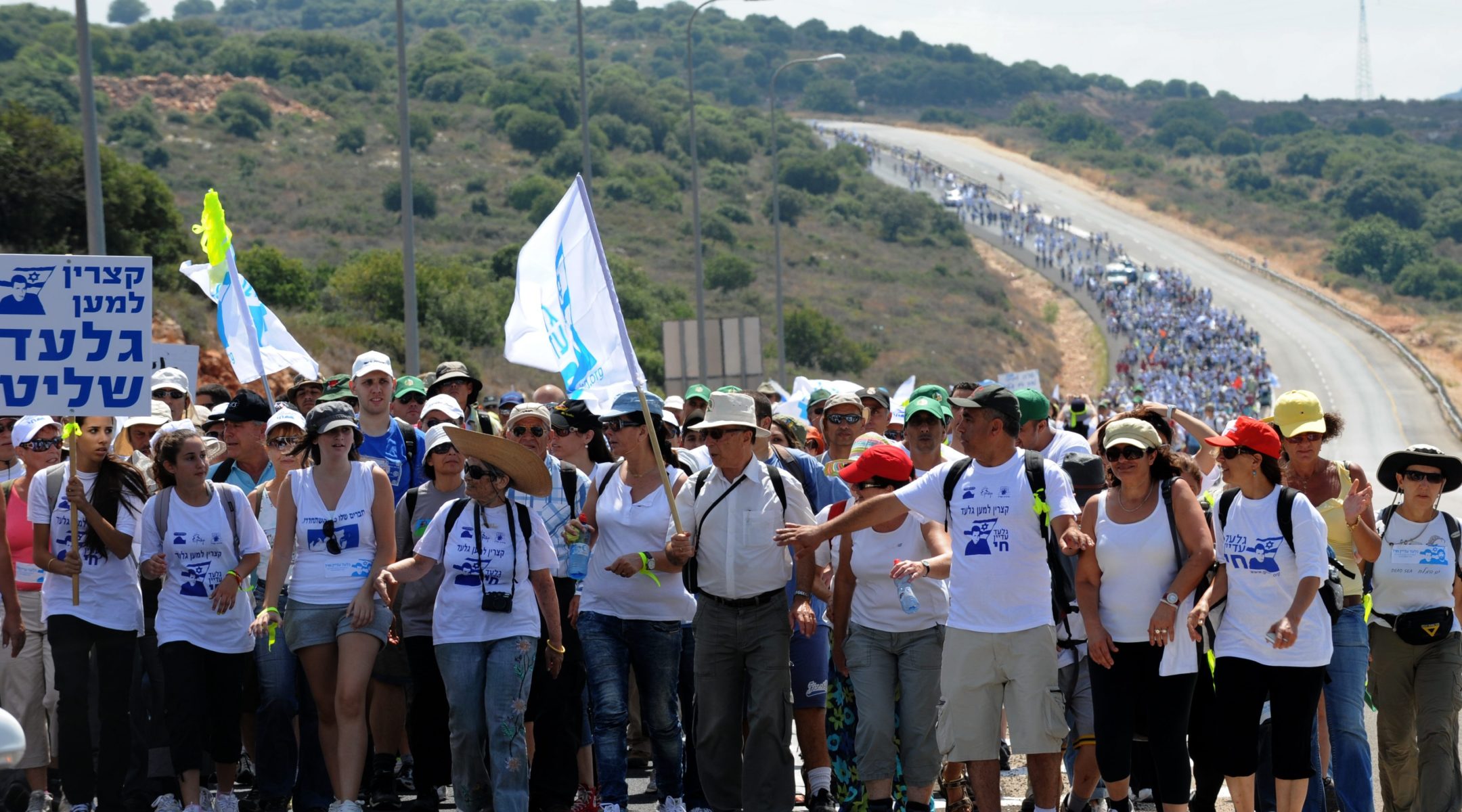 Led by Gilad Shalit's family, thousands of Israelis began a march to Jerusalem from northern Israel to press for the release of the captive soldier, June 27, 2010. (Gili Yaari / Flash 90 / JTA)
Advertisement

JERUSALEM (JTA) — The family of Israeli soldier Gilad Shalit and thousands of supporters began a protest march to mark the four years of his captivity.

Under the slogan “Gilad is still alive,” at least 2,000 supporters on Sunday joined Shalit’s family on a march from northern Israel to Jerusalem, a 120-mile walk that is expected to take about 12 days. The march, which left from the family’s home in Mitzpe Hila near the Lebanese border, will make stops in sites significant to the family.

On Sunday afternoon, the march stopped at the high school Shalit attended in Kibbutz Cabri.

In Jerusalem, the family will sit in a protest tent erected across from the Prime Minister’s Office.

“We have waited four years and Gilad is still waiting — those who sent him there must bring him home,” Noam Shalit, Gilad’s father, said as the march set off.

Shalit was captured in a cross-border raid on June 25, 2006 and is believed being held by Hamas in Gaza. Hamas has said it is waiting for hundreds of prisoners to be released to Israel, the West Bank and Gaza, as well as other Arab countries, including prisoners directly responsible for the deaths of Israelis, before it will release Shalit.

Prime Minister Benjamin Netanyahu called Noam Shalit before the march began and invited him to meet when the march reaches Jerusalem.

“Friday marked the fourth anniversary of the abduction of Gilad Shalit,” Netanyahu said Sunday before the start of the weekly Cabinet meeting. “The government and the security services are continuing to make constant and varied – open and secret – efforts to bring Gilad Shalit back home safe and sound.”

He added “Our heart is with Gilad and with his family. Four years after his abduction, I call on the international community to line up alongside the State of Israel and our unequivocal and just demand that our abducted soldier be returned immediately.”