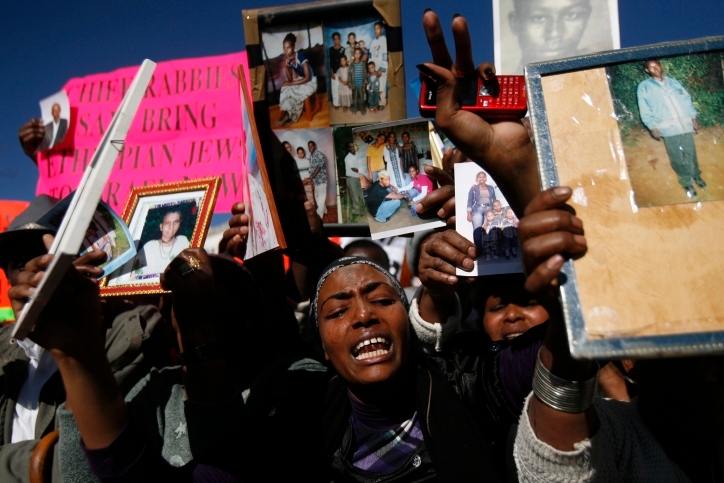 NEW YORK (JTA) — After months of fits and starts, advocates for Ethiopian aliyah are hoping that a visit to the African country this week by Israel’s minister of immigrant absorption will help set in motion a process that will bring some 7,500 additional Ethiopians to Israel.

So far, the Israeli government has committed to checking only 1,800 of them for aliyah eligibility and bringing those who qualify to Israel.

But advocates for Ethiopian aliyah want a total of 8,700 Ethiopians checked for eligibility — all those they say have been waiting in the Ethiopian city of Gondar and are part of a list compiled in 1999 of potential immigrants. These advocates have been pressing their cause with Israeli government officials.

“It could either be done by a Cabinet resolution or the Knesset could adopt legislation,” said Joseph Feit, a leading board member at the North American Conference for Ethiopian Jewry, or NACOEJ, the U.S. Jewish group that has been leading the campaign for Ethiopian immigration. “The hope is the government will adopt a resolution and the legislation forcing the issue will not be necessary.”

NACOEJ has led a campaign for the 8,700 Ethiopians for about three years and, before them, for tens of thousands of other Ethiopians who have immigrated to Israel since the early 1990s. That’s when Israel began accepting Falash Mura — Ethiopians claiming to be descendants of Jews who converted to Christianity generations ago or claiming to have links to such people, but who now seek to return to Judaism and immigrate to Israel.

The Israeli government has declared an official end to mass Ethiopian immigration several times. Each time, however, aliyah from Ethiopia resumed after pressure by advocates convinced a key government official — usually the prime minister — to reopen the gates.

After the most recent declared ending of Ethiopian aliyah, in August 2008, it took a few months for the Olmert government to reverse course and agree to check the aliyah eligibility of 3,000 additional Ethiopians. Since then, some 1,200 Ethiopians have been brought to Israel.

In May 2009, the Netanyahu government affirmed that once all 3,000 were checked, Ethiopian aliyah would be over.

But now advocates say they are close to reversing that decision, too.

Thanks to aggressive lobbying by NACOEJ and its supporters, the number of Israeli officials and lawmakers who support an increase is growing. In recent weeks Natan Sharansky, the chairman of the Jewish Agency for Israel, which is responsible for immigration to the country, has endorsed NACOEJ’s position, calling for Israel to examine the eligibility of all 8,700 would-be petitioners in Gondar and speedily bring them on aliyah so Israel can end mass Ethiopian immigration.

“The aliyah from Ethiopia must be completed,” said the director of the Jewish Agency’s immigration and absorption department, Eli Cohen, who works with Sharansky and accompanied Immigrant Absorption Minister Sofa Landver on her trip to Ethiopia this week. “The time has come to complete the mission. The longer we wait, it will not be solved. It will get more complicated.”

Prime Minister Benjamin Netanyahu — who attended a ceremony at Israel’s Ben Gurion Airport the last time he was prime minister, in 1998, welcoming what his government said was the last planeload of Ethiopian immigrants — has yet to approve an expansion of the list to 8,700.

But in the meantime, the Jewish Agency and NACOEJ have revived an agreement reached more than five years ago but never implemented under which the Jewish Agency would take over NACOEJ’s aid compounds in Gondar and bring all remaining eligible Ethiopians to Israel. The NACOEJ compounds, which provide schooling and some employment and food aid, have been blamed for providing an incentive for Ethiopians of all stripes to congregate in Gondar and claim links to Israel.

Under the agreement, NACOEJ would shutter the compounds and cease all operations in Ethiopia once the last of the eligible Ethiopians is brought on aliyah.

Now the job is to convince the prime minister, Feit said.

“Everybody’s on board,” Feit told JTA. “The 8,700 people in Gondar have been waiting there from two to 10 years. Even if more people come down from the villages, they won’t be allowed to make aliyah. It’s a closed list.”

Part of what makes the immigration from Ethiopia so complicated are the special circumstances surrounding the Falash Mura.

Unlike the Ethiopian Jews who made aliyah in Operations Moses in 1984 and Operation Solomon in 1991, the Falash Mura, whose ancestors converted to Christianity, did not maintain Jewish customs and were not identifiably Jewish. Until they left their villages, many practiced Christianity, had crosses tattooed on their foreheads and did not know what being Jewish was.

In 1991, then-Prime Minister Yitzhak Shamir decided they were not Jews and kept them off the planes during Operation Solomon. Subsequent Israeli governments reversed that policy, but due to the difficulty of finding evidentiary proof of their Jewish lineage, the Falash Mura were brought to Israel under the Law of Entry, a humanitarian measure aimed at family reunification. Other immigrants come to Israel under the Law of Return, which guarantees the right of Israeli citizenship to anyone with a Jewish grandparent, including Ethiopians.

Numerous officials involved in Ethiopian aliyah — from Jewish Agency officials working in Ethiopia to Israeli interior ministers in Jerusalem — have questioned the legitimacy of the 8,700 people, 1,200 of whom are already in Israel. Sounding a common refrain among critics of the Falash Mura aliyah, they have described the aliyah petitioners remaining in Ethiopia as mostly Christian Ethiopians deceptively claiming Jewish links and adopting Jewish observances in a bid to escape Africa’s desperate poverty for the relative comfort of the Jewish state.

Though the Israeli Rabbinate has determined that the Falash Mura have Jewish roots and should be welcomed back to the faith, critics say the Ethiopians left in Gondar are masquerading as Falash Mura.

That criticism, and concerns over the cost of absorbing the immigrants, has held up implementation of government decisions to bring Falash Mura to Israel — including the government’s decision to check 3,000 Ethiopians from among the 8,700 in Gondar.

Before Landver’s trip this week, which was organized by the Jewish Agency, the minister of immigrant absorption told The Jerusalem Post that she hoped her visit to Ethiopia would help her better understand the issues.

“Once I have seen what is going on, then I will be better equipped to sit with the prime minister and discuss what the goal of the Israeli government is regarding this aliyah and what exactly should be done,” Landver told the newspaper. “I have already sat with many organizations that either advocate for or against this aliyah, with kessim [Ethiopian religious leaders] and many more experts. I just want to create my own opinion on this complicated topic.”