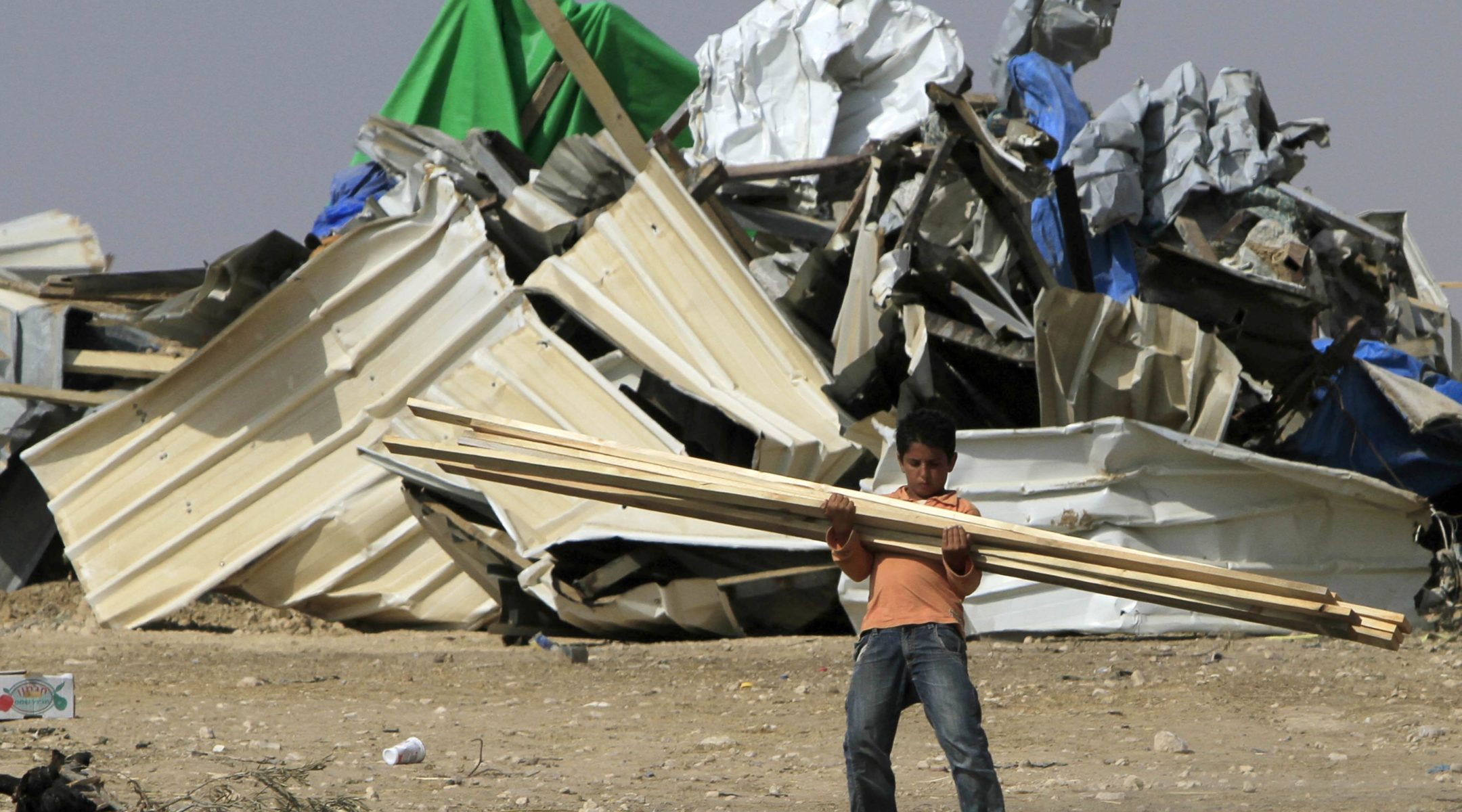 A Bedouin boy helps to rebuild the family tent in the unofficial village of Al-Arakib in the Negev Desert after it was demolished by Israeli authorities, Aug. 4, 2010. (Tsafrir Abayov / Flash90 / JTA)
Advertisement

JERUSALEM (JTA) — A standoff between the Israeli government and an unrecognized Bedouin village in the Negev Desert is raising tensions over land rights in southern Israel.

Village residents are rebuilding their homes for the third time in as many weeks after their demolition Tuesday by Israeli authorities.

In the first demolition order carried out July 27, some 1,300 police escorted Israel Lands Administration officials into the unofficial village of Al-Arakib before dawn, removing the area’s 300 residents before razing 45 structures, including homes and chicken coops. Residents rebuilt their homes and the police returned — twice.

Among the Bedouin of the Negev, the demolitions are stirring anger.

“These demolitions will lead to an intifada in the Negev,” Bedouin and Israeli Arab Knesset member Talab El-Sana told reporters as he barricaded himself in one of the structures that ultimately was demolished.

Balancing Bedouin claims to the land and their nomadic lifestyle against the needs of the modern Israeli state has never been easy in the Negev, where the Bedouin compete for space with Israeli military training zones, towns and agricultural zones. For decades, Israel has tried to get the Bedouin to settle down in organized towns the state established for them.

Approximately 155,000 Bedouin live in the Negev, 60 percent in the seven permanent towns the government created between 1979 and 1982, according to the Israel Lands Administration. The remainder live in homes and shanties scattered about the Negev. It is these Bedouin who frequently run up against government enforcers.

Israel has plans to build 13 new villages in consultation with Bedouin representatives to house these Bedouin, according to the ILA.

Approximately 150 to 200 Bedouin structures of the 40,000 considered illegal by the Israeli government are torn down each year.

The flare-up at Al-Arakib is the latest in a series of similar incidents since 1998, when the ILA says the Bedouin began to enter the area under dispute. The village has been the subject of cases in the Supreme Court, which ruled that the Bedouins’ residence at Al-Arakib was illegal.

The ILA offered the Bedouin a deal under which they would rent the land at the nominal fee of about $2 an acre, which they refused to pay. The ILA received a court order in 2003 to evacuate and demolish the homes in the village.

Many of the residents of Al-Arakib also have permanent homes in one of the Bedouin towns, Rahat, where their children are registered in schools, according to Ortal Sabar, an ILA spokeswoman.

Yeela Raanan, spokeswoman for the Regional Council for the Unrecognized Villages, told Human Rights Watch that only a few dozen Al-Arakib residents have other homes and that “there are at least 250 people now who don’t have another option.”

Ariel Dloomy, projects director for the Negev Institute for Strategies of Peace Development, says he believes that in the wake of Al-Arakib there will be more demolitions of Bedouin settlements. He said the wholesale demolition of Al-Arakib was a trial balloon to see how the Israeli people would react.

“There is a deep lack of knowledge about the Bedouins and their historic presence on the land on the side of the Jewish population in Israel,” Dloomy said. “Most of the Jewish Israelis view this conflict as a zero-sum game, while we think there is a place for everybody — Jews and Arabs — in the Negev.”

In an editorial criticizing the government for demolishing the homes at Al-Arakib, Israel’s daily Haaretz called the Bedouin “the children of the Negev.”

“Destroying their homes and pushing them into the crowded and poor Bedouin cities creates a much more severe political and social problem than the danger of the Bedouin living on state lands,” the editorial said.

During the demolitions at Al-Arakib, some critics suggested that the state wanted to clear the area for the Jewish National Fund to plant a forest at the site. JNF denied the claim, issuing a statement last week saying it “was not involved in this operation and has no link to the subject of evacuating Bedouin soldiers whatsoever.”

The organization plants forests throughout the country under a master plan of the Israeli government, a JNF spokeswoman told JTA.

JNF’s Blueprint Negev, a plan to bring about 250,000 Israelis to live in the Negev by 2013, also is raising funds to benefit the local Bedouin population. Among the sites planned is the Abu Basma Regional Council Complex/Medical Center, to be built on land donated by JNF, as well as parks and water supply and treatment projects.

After the demolitions of recent weeks, Bedouin leaders warned that the government is doing serious harm to its relations with the community.

“The attempt to uproot Bedouin citizens from their settlements constitutes a serious insult to all Bedouin,” said the Committee of Al-Arakib. “All attempts to uproot the residents of the village will fail in the end.”