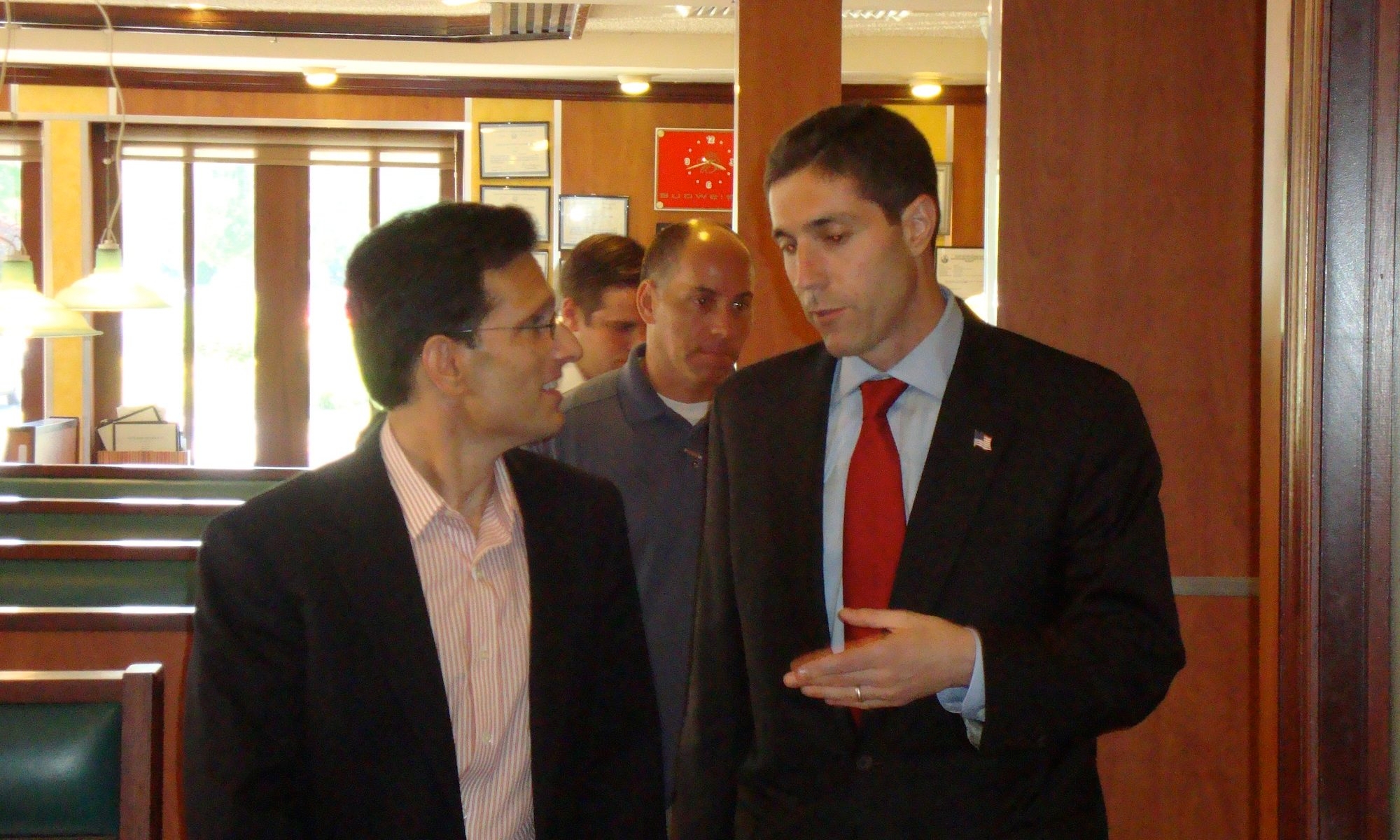 Randy Altschuler, right, a Republican who holds a slim lead in his suburban New York congressional district, campaigning this summer with Rep. Eric Cantor, currently the only GOP Jewish lawmaker in the Congress. (Courtesy Randy Altschuler for Congress)
Advertisement

WASHINGTON (JTA) — The sharpest signal of what last week’s elections meant for Jews came not from Washington but from New Orleans, Nova Scotia and Australia.

In New Orleans, Israeli Prime Minister Benjamin Netanyahu delivered a speech Monday calling for moving beyond sanctions to mounting a “credible military threat” against Iran as a means of avoiding war.

“Containment will not work,” Netanyahu said in his address to the General Assembly of the Jewish Federations of North America.

The prime minister’s remarks echoed the precise terminology used by Sen. Lindsey Graham (R-S.C.) in Nova Scotia two days earlier, when he told the Halifax International Security Forum that “containment is off the table.” The likely new majority leader in the U.S. House of Representatives, Rep. Eric Cantor (R-Va.), referred to a “credible military threat” in the days before the election.

It was a clear sign that Netanyahu feels empowered by the Republican sweep last week of the House of Representatives to trump the Obama administration’s emphasis on peacemaking with the Palestinians with his own priority: confronting Iran.

The emerging gap between Israel and its Republican friends on one side and the White House on the other could presage a repeat of tensions in the late 1990s between Netanyahu, in his first term, and President Clinton — tensions that pro-Israel officials found themselves brokering, often to their discomfiture.

Obama administration officials have indicated that they will not be taking cues from anyone in setting foreign policy.

Defense Secretary Robert Gates, speaking Monday in Melbourne, Australia, where he is on an official visit with U.S. Secretary of State Hillary Rodham Clinton, delivered a rejoinder to Netanyahu’s remarks.

“We are prepared to do what is necessary, but at this point we continue to believe that the political-economic approach that we taking is in fact having an impact in Iran,” Gates said.

Gates’ response implicitly rejected not only an escalation but Netanyahu’s claim that sanctions are not working. It also signaled that the Obama administration was going to protect its foreign policy turf — the traditional White House posture when opponents take one of the houses of Congress.

That was clear already last week when Valerie Jarrett, one of Obama’s top aides, told sympathetic nongovernmental groups in an off-the-record phone call that the White House would be unwavering — even after losing the House majority — in pressing Israel and the Palestinians to return to the peace talks.

“The president has made it very clear that he is committed to doing whatever he can to foster talks in the Middle East,” said Jarrett, Obama’s senior adviser for public engagement. “That’s not a partisan issue; his commitment to that is unwavering.”

But Netanyahu, speaking at the federations’ General Assembly, expressed confidence that he had U.S. backing in resisting Palestinian demands. He listed a number of items the Palestinian Authority is seeking, including a freeze on Jewish West Bank settlement activity and a final-status deal that would remove Israeli forces from the West Bank.

Netanyahu, however, told the crowd in New Orleans that Israel would stay in the Jordan Valley, the eastern part of the West Bank, “for the foreseeable future.” The audience applauded.

“The Palestinians may think they can avoid negotiations,” Netanyahu said. “They may think that the world will dictate Palestinian demands to Israel. I firmly believe that will not happen because I am confident that friends of Israel, led by the United States, will not let that happen.”

Beyond the ramping up of Iran rhetoric, the first signal that new Republican members who swept into office last week were going to make Israel a priority came from Marco Rubio, the Tea Party-backed candidate in Florida who romped to victory in the race for that state’s open U.S. Senate seat.

Rubio, 39 and the son of Cuban exiles, punctuated five days of celebrations with a trip to Israel with his wife. He left Sunday on the private trip, which will include holy sites. Rubio, who converted from Roman Catholicism to Southern Baptist, plans an official visit after assuming his seat, a campaign official told the French news agency AFP.

The American Israel Public Affairs Committee, which for decades has managed to secure the support of the leadership of both parties, responded to last week’s elections with a positive message.

“It is abundantly clear that the 112th Congress will continue America’s long tradition of staunch support for a strong, safe and secure Israel and an abiding friendship between the United States and our most reliable ally in the Middle East,” AIPAC said in a statement. “Many of the strongest friends and supporters of the U.S.-Israel relationship were re-elected on Tuesday.”

The statement named Sen. Harry Reid (D-Nev.), the once and future Senate majority leader, and Reps. John Boehner (R-Ohio), likely to become the House speaker;  Nancy Pelosi (D-Calif.), who loses the speakership and is vying to become minority leader along with Steny Hoyer (D-Md.); and Cantor, who is vying for majority leader. Sen. Mitch McConnell (R-Ky.), the Senate minority leader, also is a staunch Israel supporter but was not up for re-election last week.

J Street, the “pro-peace, pro-Israel” group, conducted the only national exit poll. It showed that 66 percent of Jews supported Democrats in congressional elections, compared with 31 percent for Republicans. An American Jewish Committee poll conducted in September and October showed 57 percent of Jewish respondents supporting Democrats vs. 33 percent for Republicans. The numbers are sharply down from the 78 percent of Jews who voted for Obama in 2008, according to exit polling.

The J Street poll was conducted by Gerstein/Agne Strategic Communications on Election Day, Nov. 2, and surveyed 1,000 voters who identified as Jews as part of a broader consumer panel. It had a margin of error of 3.1 percentage points. Jim Gerstein, the pollster, is on J Street’s advisory council.

The difference apparently was that the RJC canvassed only Jews who were affiliated with synagogues. When unaffiliated Jews were polled — as they were in the J Street poll and as they are in AJC’s polls — the gap between Democratic and Republican support widens considerably.

JTA reported last week that Congress lost seven Jews in both houses, and gained two. The gain might be three.

Neither party was set to declare victory, as counting had yet to begin on 9,000 absentee ballots, but Bishop said Monday that he would demand a hand recount.

Altschuler, who owns a recycling company, would become the second Jewish GOP congressman, joining Cantor. His win would bring the number of Jews to 28 in the House, along with the 12 in the Senate.

A little farther upstate, GOP candidate Nan Hayworth, a physician, ousted Rep. John Hall (D-N.Y.) from the 19th District. Hayworth is a Lutheran but belongs to a synagogue with her Jewish husband and her two sons, whom she has raised as Jewish. That makes her the mirror image of Rep. John Sarbanes (D-Md.), who was elected from his Baltimore-area district in 2006. He is Greek Orthodox but belongs to a synagogue, and with his Jewish wife has raised his children as Jews.

JTA projected a win for Rep. Gabrielle Giffords (D-Ariz.), and that became official last Friday night. The victory means a third term for Giffords, who was first elected in the GOP-leaning district in the Democratic sweep of 2006. She embraced tough immigration policies as part of her campaign this year, distancing herself from national Democrats.

Cicilline is the first Jewish Rhode Islander elected to national office, the Providence Journal quoted David Goodwin, a historian of the island’s community, as saying. The state has elected a number of Jews to statewide offices, however, including governors.

Success in the states

Republicans Tom Horne in Arizona and Sam Olens in Georgia were elected attorney general. Both are active in their communities and with the Republican Jewish Coalition.

So is Josh Mandel, a Republican state lawmaker and former Marine who was elected treasurer in Ohio. In Massachusetts, Steve Grossman, a former AIPAC president and ex-chairman of the Democratic National Committee, also won the treasurer spot.

Pro-Israel insiders in Washington noted that in different ways, Mandel and Grossman both have been leaders in the effort to sanction Iran and now are positioned to mak sure that their states enforce such sanctions. As a lawmaker, Mandel led the effort to divest Ohio from Iran. Grossman, as AIPAC president in the mid-1990s, lobbied for the Iran sanctions passed by Congress at that time.