What can Israel, the Palestinians figure out in 90 days? 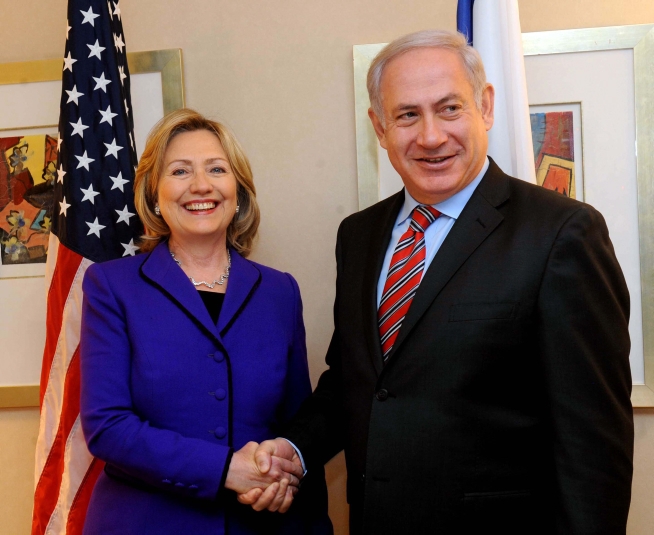 That’s the question Middle East observers are asking as Israel and the United States move closer to a deal on a 90-day West Bank Jewish settlement freeze to lure the Palestinians back to the negotiating table and revive peace talks.

A seven-hour tete-a-tete last week between U.S. Secretary of State Hillary Rodham Clinton and Israeli Prime Minister Benjamin Netanyahu resulted in new willingness by Netanyahu to press his Cabinet to agree to another settlement freeze.

In exchange, the United States reportedly offered 20 F-35 fighter jets and $3 billion in weapons, as well as a pledge not to seek any further settlement freezes. Clinton reportedly also promised Netanyahu that the U.S. would veto any attempt by the Palestinians to get the U.N. Security Council to recognize a unilateral declaration of statehood, and that the Obama administration would intensify efforts to isolate Iran.

Netanyahu’s refusal to extend the first 10-month freeze when it lapsed Sept. 26 prompted the Palestinians to suspend direct talks that had been renewed four weeks earlier.

It wasn’t clear by Tuesday whether Netanyahu would be able to persuade his Cabinet to accept the proposal. An Israeli official told The Associated Press that the Cabinet was awaiting a written U.S. proposal and would not vote on the matter by Wednesday, as planned. It also was not clear whether the Palestinians would accept the proposal.

One thing that is clear, Middle East experts said: Even if such hurdles are overcome, three months are unlikely to produce any major breakthroughs.

Aaron David Miller, a negotiator whose experience spanned the administrations of the first President Bush, President Clinton and the second President Bush, said Netanyahu could not possibly deliver the minimum demands of the Palestinians within 90 days: borders that conform to the pre-1967 lines, albeit with land swaps, and compromises on Jerusalem and refugees.

“There’s no way that Benjamin Netanyahu can make a deal with the government he now has,” said Miller, now a scholar at the Woodrow Wilson International Center and author of “The Much Too Promised Land: America’s Elusive Search for Arab-Israeli Peace.”

Instead, Miller said, the best the Americans could hope for was to get Netanyahu and Palestinian Authority President Mahmoud Abbas to the point where they trust one another enough to stick with the process. Instead of the Obama administration “owning” the process, Miller said, the Palestinians and the Israelis would be committed to the talks to the point where they would not need American prodding.

“You need Netanyahu and Abbas thinking the other guy is serious and I will stretch to meet his needs,” Miller said.

Another tack, suggested Steven Spiegel, a political science professor at UCLA, would be for the sides to agree on the settlement blocs that eventually would become part of Israel, and that there would be a one-for-one land swap with a future Palestinian state for these lands. That would allow Israel to build unfettered in those blocs while bringing the Palestinians a step closer to recognized statehood.

“The aim is to settle the settlement question and get it off the table,” Spiegel said, noting that it has been the principal issue vexing talks until now.

Much could stand in the way of such an outcome, not least of which is the distance that still separates Abbas and Netanyahu. The Palestinian leader reportedly is seeking his own assurances from the United States before returning to the negotiating table, including a freeze on building in eastern Jerusalem — something that has been rejected emphatically by Netanyahu.

Other factors that could inhibit an accommodation are a resurgence of terrorist attacks engineered by Hamas, and the economic and political realities in the United States now preoccupying President Obama after massive Democratic losses in the U.S. House of Representatives.

U.S. Rep. Eric Cantor (R-Va.) already told Netanyahu in a separate meeting that a Republican majority would “serve as a check” on the Obama administration. A Cantor spokesman clarified later to say that the lawmaker was speaking broadly, but the context of the statement suggested that it would include matters of U.S.-Israel relations.

It was clear even before the Clinton-Netanyahu meeting that the Obama administration was going out of its way to smooth a path for Netanyahu back to the talks.

When Israel announced a major building start in eastern Jerusalem on Nov. 8, just as Netanyahu came to the United States for a visit, Obama’s response was much more muted than in March, when a similar announcement occurred during Vice President Joe Biden’s visit to Israel. Instead of the tough language Obama administration officials had used in March, Obama merely said the announcement was “unhelpful” and called on both sides not to make unilateral moves.

In a phone call last Friday with Jewish organizational leaders, Daniel Shapiro, the most senior National Security Council official dealing with Israel and its neighbors, took pains to reassure his listeners that all of Netanyahu’s meetings with U.S. officials — including Biden and Clinton — had been “excellent.”

There were signs also that with the delays and suspicions still besetting the process, the administration was trimming its hopes for a settled outcome within a year.

State Department spokesman P.J. Crowley admitted Monday in a briefing that the administration was no longer as confident in the 12-month “clock.”

“As you know, when the process started, we said this could be accomplished within 12 months,” he said. “Hard to say at this point, given the delay over the issue of settlements, where we stand on that clock. But the first step in the process is to get them back to the bargaining table.”