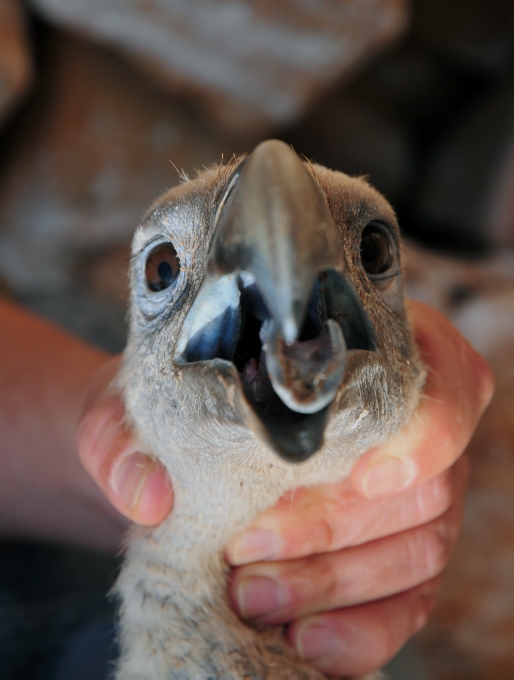 The Griffon vulture, of the type that was caught in Saudia Arabia and suspected of being a Mossad spy. (Shay Levy/Flash 90))
Advertisement

Spying is for the birds

First sharks, now vultures — apparently Israel’s secret service will hire anything to do its dirty work.

A vulture tagged by Tel Aviv University scientists as part of a long-term research project into migration patterns was arrested in Saudi Arabia last week on suspicion of being a Mossad spy. The incident comes just weeks after Sinai regional governor Mohamed Abdel Fadil Shousha reportedly said that a shark that attacked tourists in the waters off the coastal resort town of Sharm el Sheik was sent by the Mossad to damage Egypt’s tourist industry.

The vulture, wearing a transmitter and a leg bracelet with the university’s name on it, was nabbed in a rural area of the country. The Israeli newspaper Maariv first broke the story after monitoring Arabic media.

Arabic websites called the alleged bird-spy a “Zionist plot” and charged that many more birds were being trained to spy on Arab countries.

Saudi Arabia announced Monday that it would soon release the bird.

The port city is poised to be the next home to a Disney theme park. A 20-acre, $168 million entertainment complex including an amusement park, four theaters for live performances and a 25-screen multiplex is set to be built in Haifa, with an estimated opening date in 2013.

Israel’s most expensive home was sold.

Billionaire Teddy Sagi bought the mansion in Herzliya Pituah in the central part of the country for about $38 million. Sagi, a controlling shareholder in the gaming software development company Playtech, purchased the house from media billionaire Zaki Raab, who had bought it about five years ago for $24 million in the most expensive home purchase in Israeli history.

The 2,000-square-meter house is located on a half-acre lot on Israel’s most expensive street. It features a sealed room, fitness room, wine cellar, private swimming pool and elevator to the Mediterranean Sea.

Last week the lawmakers participated in a training workshop to help them master, or at least not fear, online social networking sites such as Facebook, Twitter and YouTube. They also learned about the use of such sites by Israeli government offices and other Knesset members, and by governments around the world.

“As elected officials, it is crucial for us to know how to maintain regular contact with our voters by the use of key tools,” the lawmakers wrote in a letter requesting the workshop, The Jerusalem Post reported. “This is not a luxury but a basic skill, and it is important that the Knesset not remain behind.”

Three women graduated from an Israeli Air Force cadets’ course and are ready to fly.

The fighter pilot, transport pilot and combat navigator are the first women to finish the course in the last year-and-a-half. Three women also finished cadet training in 2005.

Some 15 percent of last week’s graduates were not born in Israel and 22.5 percent had a foreign language as their mother tongue. Of the latter group, 2.5 percent were Russian speakers and 20 percent native English speakers.

Some 20 percent of the graduates volunteered for a year of community service before being drafted, and 55 percent were members of a youth movement. Only one of the graduating cadets was married.

American actor Johnny Depp will bring an entourage of celebrities on a visit to Israel next month.

Depp will be accompanying his longtime girlfriend, French singer Vanessa Paradis, for her performance at the Tel Aviv Performing Arts Center. The couple will have their two children in tow.

Several American and French celebrities from the music and film industries are set to join the couple in Israel, according to David Stern, the producer of Paradis’ Tel Aviv performance. He declined to name any of the celebrities in an interview with Ynet, but German fashion designer Karl Lagerfeld, French actress Isabelle Adjani, and French singer and actress Bambou are said to be among the potential visitors.

Alef-Bet comes to the web

Thousands of name requests on a first-come, first-serve basis were made in the early days of registration, according to the Israeli Internet Association. Experts say the Hebrew domain names will help Israelis to utilize the Internet more effectively.

“Domain names in Hebrew are intended to make Internet access easier for part of the public that found it difficult, due to the use of Latin letters,” Doron Shikmoni, vice president of the Israeli Internet Association, explained in a public letter. “When the Hebrew domain name registration is implemented, websites with Hebrew names will be accessible in Israel and every other place in the world.”

Corporations, government offices and nonprofit organizations were allowed to register their Hebrew domains for three months before the process was open to the public in order to allow them to protect their well-known trademarked names, Haaretz reported. Some 389 domains were registered in that phase.