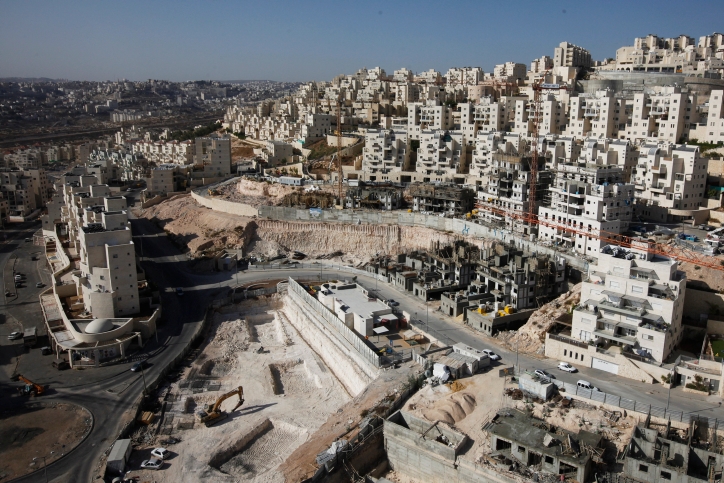 Settler leaders are accusing the Israeli government of imposing a de facto freeze on Jewish construction in the West Bank that will halt all new construction, like in Har Homa. (Miriam Alster/FLASH90 )
Advertisement

JERUSALEM (JTA) — Although the 10-month moratorium on building in Jewish settlements in the West Bank was lifted last September, settler leaders complain that no construction is being allowed in the large urban areas and warn that a de facto freeze on all Jewish building in the West Bank is looming.

The settler leaders maintain that the Netanyahu administration is refusing to publish new tenders and that all current building is based on a limited number of permits issued years ago by previous governments.

“It’s like a pipeline into which no new water is being pumped,” Danny Dayan, chairman of the Yesha Council, the umbrella leadership of the setter movement, told JTA. “Water still comes out on the other side because there is still some inside. But it will soon dry up.”

According to Dayan, already there are no major building projects in large West Bank towns such as Ma’aleh Adumim, Ariel and Betar because the Netanyahu government has not published a single land tender for urban construction in the West Bank in the two years it has been in power.

“This has led to the absurd situation in which nearly all the building going on now is by private contractors in small isolated settlements outside the blocs slated to remain in Israel in any future agreement with the Palestinians,” he said. “And in the settlements on which there is a consensus, the freeze is still in force.”

With plans for more than 4,000 new housing units still awaiting government authorization, the mayors of Ariel and Ma’aleh Adumim recently fired off letters of complaint to Netanyahu, and settler leaders announced that they were considering launching a nationwide “save our towns” campaign.

But according to Peace Now, a group that is against the settlements and monitors construction in the West Bank, the settler claims are grossly misleading.

“Immediately after the freeze was lifted, we saw a flurry of building the likes of which we hadn’t seen for  years,” Peace Now Chairman Yariv Oppenheimer told JTA. “Since the freeze ended, the settlers have begun work on about 1,700 housing units in 67 different settlements.”

Oppenheimer acknowledged, however, that the Netanyahu government is withholding permits for new building in the large urban areas. In his view, Netanyahu ended the freeze to please the settlers, but is not issuing new permits to please the Americans.

“It creates a situation in which no one is happy and the national interest is compromised,” Oppenheimer said.

In mid-February, Foreign Minister Avigdor Lieberman seemed to confirm that the construction moratorium was still largely in effect.

At a meeting with U.S. Jewish leaders in Jerusalem, Morton Klein, the president of the Zionist Organization of America, asked whether it was true that the government was not issuing new permits in towns like Ma’aleh Adumim and Ariel.

To some extent Lieberman may have been playing politics. For some time he has been sniping at Netanyahu in a bid to usurp his position as the natural leader of the Israeli right, and last September Lieberman delivered a speech at the United Nations in which he implied that Netanyahu’s peace policy vis-a-vis the Palestinians was totally unrealistic.

The settler claims about a de facto freeze were grist to Lieberman’s mill, and it would have been surprising if he had let the chance slip by for another implicit broadside at the prime minister’s right-wing credentials while boosting his own.

Nevertheless, it is becoming increasingly apparent that the 10-month moratorium on building and the quiet freeze on new construction permits have not won Netanyahu many points from the international community — so much so that he is now considering launching a new political initiative to redress the balance.

News of this first emerged during an angry telephone conversation in late February with German Chancellor Angela Merkel, who accused him of not having done anything to promote peace with the Palestinians.

“There are discussions at the highest level on Israel taking a diplomatic initiative, including the possibility of another major policy speech by the prime minister,” a senior Netanyahu aide told JTA. “There is an understanding that we have to take the lead.”

The idea is that in what is being dubbed as a “second Bar-Ilan speech,” Netanyahu will articulate in greater clarity his vision of peace. If this brings the Palestinians back to the negotiating table, well and good. If not, at least it will show the world that it is the Palestinians who are obstructing peacemaking, not Netanyahu, the aide explained.

The Israeli estimate is that Palestinians will return to the peace table only if they are disabused of the notion that they will be able to achieve their goals through unilateral moves in the United Nations.

“That is why Netanyahu was so pleased with the U.S. veto of the Palestinian-initiated Security Council vote against the building in the settlements and so disappointed with the European decision to go along with it,” the aide said.

But will Israel be able to get the Palestinians back to the negotiating peace table without imposing an official new settlement freeze — and is Netanyahu’s refusal to grant new building permits a move in that direction?

At a Likud Knesset faction meeting Monday, the prime minister indicated that it might be. Excoriating settler efforts to obtain new permits, he said, “Israel is facing a very difficult international reality” and the settler leaders “don’t understand where they are living.”

The senior Netanyahu aide told JTA that “The settler community has to understand that the diplomatic struggle isn’t over additional building in the settlements, it’s over the settlements themselves.”