With pressure mounting, will Bibi go left or right? 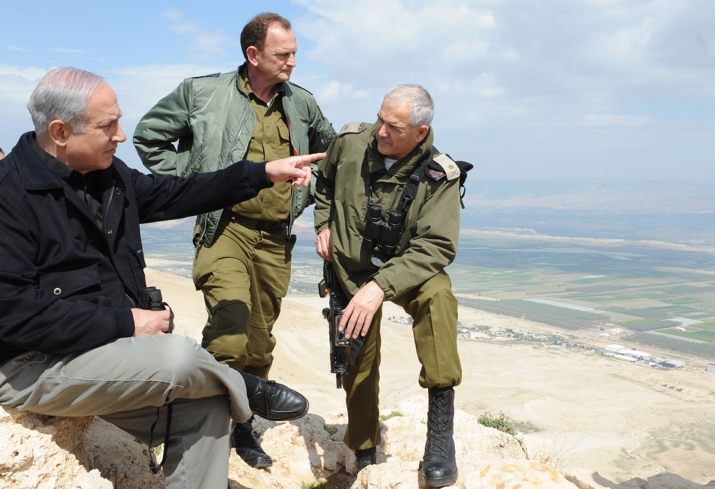 JERUSALEM (JTA) — Israel is staring at a fork in the road, with potential disaster along either path.

Israeli Prime Minister Benjamin Netanyahu, the man behind the wheel at this critical juncture, is expected to announce a new peace initiative within the next two months, and the battle over which path it will hew to is causing serious divisions within his Cabinet.

His defense minister, Ehud Barak, says the only way to head off a “diplomatic tsunami” that will engulf the Jewish state is by pressing for a major initiative on the Palestinian track that deals with all the core issues. Likud moderates such as Dan Meridor and Michael Eitan support Barak’s stance.

The debate has brought to the fore the fundamental differences within the Cabinet on the Palestinian issue.

Barak argues that unless Israel has a peace plan on the table within the next few months, it could suffer its worst-ever diplomatic defeat. With Israel failing to offer any alternative, he envisions a situation in which the Palestinians take their case to the United Nations in September and get wall-to-wall international recognition of their state along the 1967 lines without having to make concessions on borders, refugees or Jerusalem — or even declare an end to the conflict.

In Barak’s view, if Israel wants its case to be heard, it must offer an alternative plan. Otherwise, it will find itself under increasing international pressure to withdraw to the pre-1967 lines without even its most basic security demands taken into account. Israel also will face growing delegitimization as an occupying power in defiance of the will of the international community.

“It would be a mistake to ignore this tsunami,” he said Sunday at the Institute for National Security Studies in Tel Aviv. “Israel’s delegitimization is just over the horizon, even if the public doesn’t see it. It’s very dangerous and we need to act.”

For the hard-liners, the danger lies in what they call Barak’s “delusional” approach. Ya’alon, who like Barak is a former Israeli army chief of staff, argues that it is dangerously naive to think the conflict can be solved by territorial concessions when the real problem is a fundamental Palestinian refusal to come to terms with Israel’s existence.

Ya’alon says that even moderate Palestinian leaders such as Palestinian Authority President Mahmud Abbas would like to see Israel disappear, and that peace will be possible only when the Palestinian mind-set changes and all forms of anti-Israel education and incitement stop.

It’s a view that has gained some more traction among the Israeli public following the brutal killings last Friday night of five family members in the West Bank Jewish settlement of Itamar.

For now, Ya’alon says, the focus should be on Palestinian institution-building and economic improvement; in other words, slow bottom-up building of a Palestinian capacity for peace. Big ambitious peace moves like Barak’s inevitably will fail and likely spawn new violence, he says. Ya’alon insists that any proposed new peace plan should have no territorial dimension.

Which way is Netanyahu likely to go?

On the one hand, he and his closest advisers have a great deal of respect for Barak and are well aware of the widespread international perception that it is Netanyahu’s foot-dragging on peacemaking that is responsible for the current impasse. Indeed, the leaks on Netanyahu’s purported new peace plan followed a heated telephone exchange in which German Chancellor Angela Merkel reportedly accused Netanyahu of having “done nothing to advance peace.”

Similarly, on March 1, President Obama told a roomful of American Jewish organizational leaders that they and their friends and colleagues in Israel should “search your souls” over Israel’s seriousness about making peace.

On the other hand, Netanyahu’s circle is comprised of hard-liners who are widely believed to wield much influence over the prime minister. The prime minister also has made some recent hard-line moves — for example, appointing the hawkish Yaakov Amidror as his new national security adviser and holding talks with the far right National Union Party on joining the governing coalition.

The question is not whether Netanyahu will present a peace plan but how far he will go.

Despite Ya’alon’s reservations, the plan is expected to focus on territorial and security issues, and the linkage between them. The way the plan is shaping up, Israel probably will offer to hand over more territory to full Palestinian jurisdiction ahead of negotiations on final borders and allay Palestinian fears that the interim stage will become permanent.

Under the plan, the United States will assure the Palestinians that final borders will be based on the pre-1967 lines with relatively minor land swaps, and Israel will seek U.S. assurances for an Israeli military presence in the Jordan Valley and for retention of large settlement blocs as part of Israel proper.

On the basis of the plan, reflecting Israeli good will and seriousness about peacemaking with a strong international underpinning, the Palestinians will be invited to talks on all the core issues.

Due to the differences between Cabinet moderates and hard-liners, Netanyahu has not discussed the plan in the Forum of Seven senior ministers, which includes Barak, Meridor, Begin and Ya’alon. Instead he is holding a series of one-on-one consultations.

There will also have to be detailed talks with the Americans to finalize a package in which they have a major role.

Despite the hype surrounding the new peace package, it remains too early to gauge whether Netanyahu is serious about peacemaking, as he insists, or simply playing for time, as his critics contend.

But with perception growing overseas that Netanyahu is the problem, not the Palestinians, the onus is on the prime minister to prove that this time he means business.