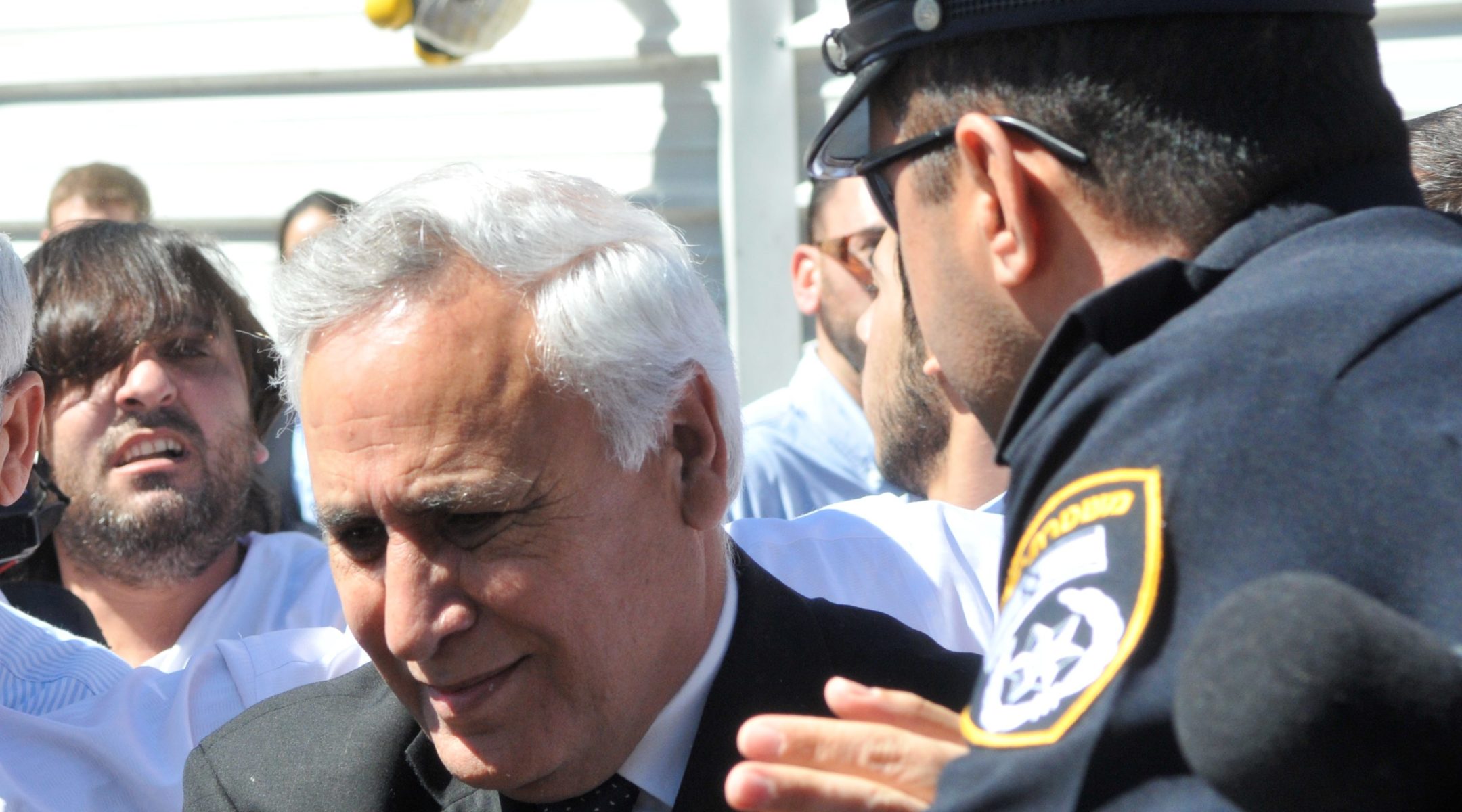 JERUSALEM (JTA) – Former Israeli President Moshe Katsav’s sentence to prison on rape and sexual assault convictions shows that not even the country’s leaders are above the law, Israeli leaders stressed.

A panel of three Tel Aviv District Court judges on Tuesday sentenced Katsav to seven years in jail and ordered him to pay compensation to his victims. The sentence came nearly five years after he was first accused.

Katsav, 65, reportedly began sobbing after the verdict was read and then yelled out several times, interrupting the judges, saying “It’s all lies,”  “the sentence is a mistake” and “it’s not true.”

Katsav’s prison sentence is set to begin May 8. He was also ordered to pay more than $28,000 to the rape victim and about $7,000 to the sexual assault victim. Following  his release from prison, Katsav will serve two years of probation.

“The defendant committed the crime and like every other person, he must bear the consequences. No man is above the law,” the judges wrote in their sentence, which was read out in the courtroom. “The contention that seeing a former president of the country go to jail is too painful to watch is an emotional argument, but it definitely cannot be accepted as an ethical argument.”

In a minority opinion, Judge Judith Shevach said that Katsav was judged prematurely in the media and she slammed Attorney General Menachem Mazuz for his public statements during the investigation.

“The attorney general isn’t supposed to operate in the media arena,” Shevach said. “If he already decided in 2006 that Katsav was a sexual offender – what else can the public decide?” Premature judgment of the accused by the media put him in a shaky opening position.”

Katsav has 45 days to appeal the sentence.

“This is an extraordinary day in the State of Israel,” Prime Minister Benjamin Netanyahu said following the sentencing. “This is a day of sadness and shame, but it is also a day of deep appreciation and pride for the Israeli justice system. The court issued a sharp and unequivocal ruling on a simple principle, that of equality before the law; nobody is above the law, not even a former president, all are subject to the law. This distinguishes the State of Israel to a very large degree.”

Netanyahu said the court also ruled on equality between men and women.

The closed-door trial of Katsav lasted for one year, ending with a guilty verdict on Dec. 30. Two years ago, Katsav declined what was seen as a lenient plea bargain — one that dropped the rape charges for lesser charges and likely would have left him with a suspended sentence — saying that he wanted to clear his name in court.

Katsav, who immigrated to Israel from Iran in 1951, became president when the Knesset elected him in 2000, upsetting candidate Shimon Peres. Peres became president in 2007 after Katsav resigned in the wake of the allegations shortly before the end of his term.

The allegations came to light when Katsav went to the attorney general, telling him that he was being blackmailed by a female employee. The investigation turned against Katsav when the employee alleged rape and sexual harassment.

During a meeting with soldiers in northern Israel, Peres said he did not think a bust of Katsav should be removed from the President’s Residence, as some have advocated.

“You mustn’t change history, for good or for bad,” Peres said. “History is full of bad and good things.”

Opposition leader Tzipi Livni, head of the Kadima Party, said the harsh sentence did not make it “a happy day.”

“A day when a president of the State of Israel goes to prison for rape is not a happy day. You can’t negate the presidency after the fact, but you can deny liberty,” she said, referring to the prison sentence.

The lawyer representing “A,” the former Tourism Ministry employee raped by Katsav, said following the sentencing that his client was “relieved and satisfied.”

“I never sought vengeance, and the severity of the sentence did not mean that much to me,” A told Ynet. “The most important thing for me was the verdict, the fact that the court, unanimously, believed me and did me justice, even if it was stalled. I shall be happy to return to my daily life, family and anonymity. “

Katsav is not the first president of Israel to be accused of a crime. President Ezer Weizman resigned his position in 2000, less than halfway through his second term, after being accused of accepting cash gifts from businessmen. He was not put on trial, however, since the statute of limitations had run out.