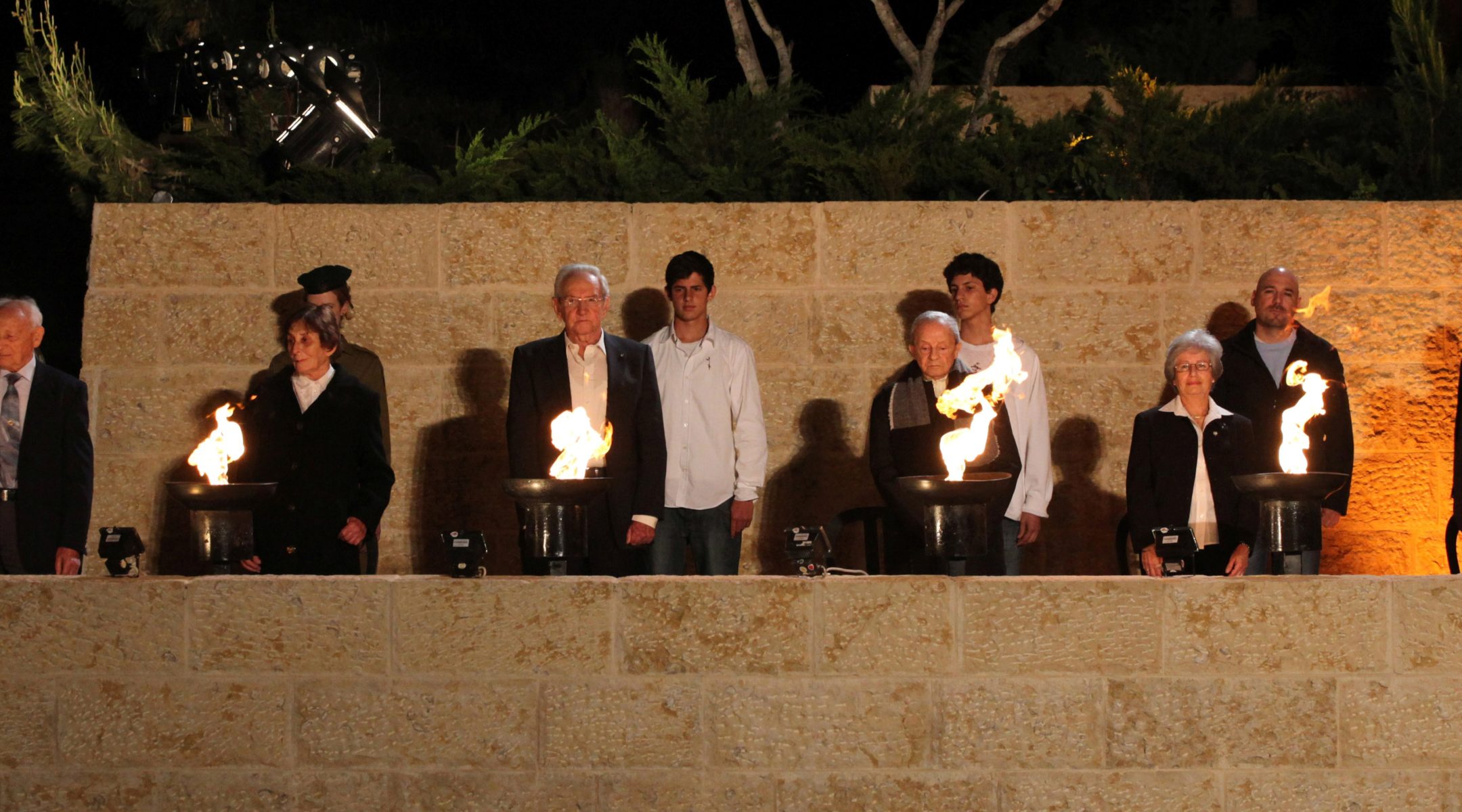 Holocaust survivors lighting some of the torches to represent the 6 million Jewish victims of the Holocaust in the official Israel Yom Hashoah ceremony at the Yad Vashem Holocaust memorial in Jerusalem, May 01, 2011. (Yossi Zamir / Flash90)
Advertisement

JERUSALEM (JTA) — “Israel is the historical commemoration to the victims of the Holocaust,” President Shimon Peres said at a Yad Vashem ceremony marking Yom Hashoah.

Among the other rites to commemorate the day will be one remembering Jews who rescued other Jews from the Nazis.

“The Shoah finally established that there is no substitute for a homeland of our own. There is no replacement for the Israel Defense Forces,” Peres said at the Yad Vashem ceremony, which was broadcast on every television channel in Israel.

“Today we have established our own homeland. Today we have an excellent army that has gained the respect of the world. We have a democratic regime that can protect as necessary and pursue peace as needed. This is the answer to an enemy, every enemy. Israel is the historical commemoration to the victims of the Holocaust.”

The central theme of this year’s observance is “Fragments of Memory: The Faces behind the Documents, Artifacts and Photographs.”

The theme comes as Yad Vashem launches a national campaign, “Gathering the Fragments,” to rescue personal items from the Holocaust period. The campaign, in partnership with the  National Heritage Project of the Prime Minister’s Office, the Ministry of Education and the Ministry of Pensioner Affairs, is working to gather documents, diaries, photos, artifacts and artworks from the Holocaust years that are being held privately by people in Israel.

“Personal stories, told through items such as letters and postcards, artwork, diaries, toys and more add a critical dimension to Holocaust commemoration and education,” said Yad Vashem Chairman Avner Shalev. “A great deal of our activities today at Yad Vashem, including education and research, rests on this documentation. That is why we are urging people who may have Holocaust-related material in their possession to bring them to Yad Vashem, where they will be preserved for generations to come.”

On Monday, the B’nai B’rith World Center in Jerusalem and the Jewish National Fund will hold a ceremony dedicated to commemorating the heroism of Jews who rescued fellow Jews from the Nazis.

For the first time during the ceremony, a Jewish Rescuers Citation will be awarded by the Committee to Recognize the Heroism of Jews who Rescued Fellow Jews During the Holocaust and the B’nai B’rith World Center.

Soni Schey, the oldest daughter of Joschua and Henni Birnbaum, will accept the citation of behalf of their parents, who rescued Jewish children in the Westerbork detention camp in Holland and at the Bergen-Belzen concentration camp in Germany. Schey and her five siblings, who all made aliyah after World War II, will light the memorial torch.

“The important question that must be asked today is, have we learned the lessons of the Holocaust in the world?” he asked. “And to our great regret, the answer is no.  A renewed anti-Semitism is spreading. Various forces are joining together and flooding the world with anti-Semitism. The hatred of Jews and the denial of their existence have turned into hatred of the Jewish state and denial of its existence.”

A siren will be sounded for two minutes on Monday morning in honor of the 6 million victims of the Holocaust.

Some 208,000 Holocaust survivors are living in Israel, and about 35 die each day, according to the Foundation for the Benefit of Holocaust Victims in Israel.