What is won ‘Jeopardy!’ (What did the rabbi do on Monday?) 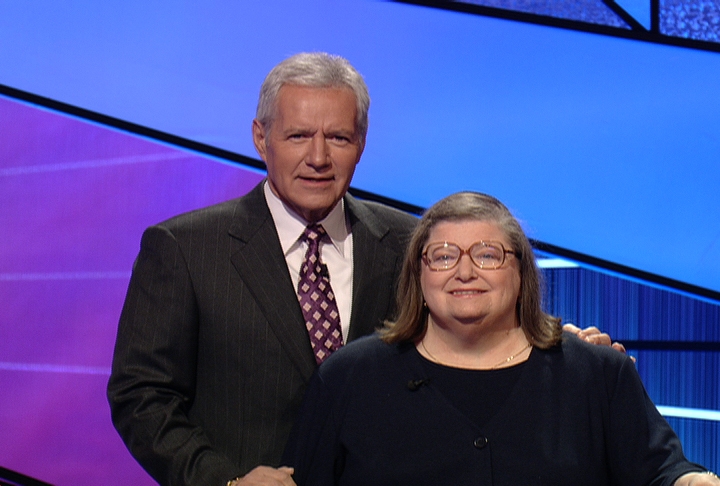 Rabbi Joyce Newmark, shown with "Jeopardy!" host Alex Trebek, won $29,200 and the championship in her first appearance on the game show, which aired May 16, 2011. (Courtesy of Jeopardy Productions, Inc.)
Advertisement

WEST BLOOMFIELD, Mich. (JTA) — Jews have a reputation for answering a question with a question. That might help explain Rabbi Joyce Newmark’s big news — she is now a  “Jeopardy!” champion.

In the episode of the television game show that aired Monday, Newmark had no problem defeating two other contestants and finishing with $29,200.

The 63-year-old Conservative rabbi hosted a viewing party Monday night at the Teaneck synagogue Congregation Beth Sholom, where she is a member.

The episode, which was recorded Feb. 2 in Culver City, Calif., aired 20 years to the day of Newmark’s graduation from the Jewish Theological Seminary.

A member of the first class of Wexner Graduate Fellows, she has served congregations in Lancaster, Pa., and Leonia, N.J., but currently writes and lectures.

Prior to rabbinical school, Newmark spent more than 15 years in management consulting and banking.

As is her general custom, Newmark wore a yarmulke during the taping of the show. The head covering has been part of her garb since 1987.

“The interesting thing is that nobody said a thing about the kipah,” she said. “Since I was introduced as a rabbi, they may have just thought it was normal.”

Newmark had auditioned unsuccessfully for “Jeopardy!” in 2006 before her successful tryout in 2010.

While her profession was not a main focus of her appearance, it did not go unnoticed.

“As soon as I sat down in the makeup chair — the worst part of the entire experience — the makeup lady immediately began telling me why she had decided to take her son out of Jewish day school,” Newmark recalled.

Alex Trebek, the show’s longtime host, was interested in her profession, asking off-camera about how long female rabbis had been around and if there were any female Orthodox rabbis. (Newmark was not the first female rabbi to appear on “Jeopardy!” — that distinction belongs to a young Reform spiritual leader from several years ago who didn’t have much luck on the show.)

Once the cameras started rolling, Trebek introduced Newmark as a rabbi, but then went on to ask her about her experience at Woodstock, where she stayed at a motel rather than camp out.

Before the episode aired, Newmark wasn’t able to divulge much about what happened on the show, though she did insist that being a rabbi did not give her a leg up on any of the questions.

Well, maybe one — about which figure in the Bible succeeded Moses as the leader of the Israelites. Newmark certainly knew the correct response (“Who is Joshua?”), but wasn’t able to buzz in early enough.

She did, however, nail the Final Jeopardy question: “From the Latin for ‘Free,’ this 2-word term for a type of College refers to the old belief of what a free man should be taught.” … “What is liberal arts?”

Newmark was set to return Tuesday night to defend her “Jeopardy!” title.

At her audition, she was asked to fill out a form informing the producers if there were specific dates when she would not be available to tape. She wrote “Jewish holidays.”

Upon receiving the congratulatory call from the show about her selection, Newmark expressed surprise, explaining that she had never expected to be picked.

“We actually were going to call you two months ago,” the show official told Newmark, “but it was during Chanukah, so we figured you couldn’t come.”

(Rabbi Jason Miller is the director of Kosher Michigan, a kosher certification agency, and president of Access Computer Technology, an information technology consulting and social media marketing firm in West Bloomfield, Mich. He blogs at http://blog.rabbijason.com.)