Is Obama charting a new course on Israeli-Palestinian issues? 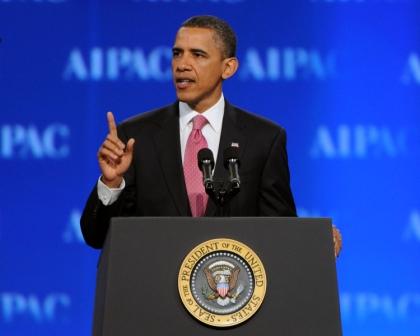 President Obama speaking at the AIPAC policy conference warned that the lack of action on the Israeli-Palestinian track undermines U.S. efforts to fend off Israel's diplomatic isolation and the Palestinians' plan to obtain recognition of statehood at the United Nations, May 22, 2011. (Courtesy of AIPAC)
Advertisement

WASHINGTON (JTA) — President Obama knew he had some damage control to do when he took the podium before thousands of Israel supporters on Sunday morning at the opening plenary of the annual AIPAC conference.

But he wasn’t offering any apologies for his speech three days earlier that called for “1967 lines with mutually agreed swaps” to serve as the basis for Israeli-Palestinian negotiations.

Rather, Obama offered mostly reassurances and clarifications. He also issued a blunt warning that doing nothing undermines U.S. efforts to fend off Israel’s diplomatic isolation and the Palestinians’ plan to obtain recognition of statehood at the United Nations in September.

“There is a reason why the Palestinians are pursuing their interests at the United Nations,” Obama said. “They recognize that there is an impatience with the peace process — or the absence of one. Not just in the Arab world but in Latin America, in Europe and in Asia. That impatience is growing, and is already manifesting itself in capitals around the world.

“The march to isolate Israel internationally — and the impulse of the Palestinians to abandon negotiations — will continue to gain momentum in the absence of a credible peace process and alternative,” the president added. “So in advance of a five-day trip to Europe in which the Middle East will be a topic of acute interest, I chose to speak about what peace will require.”

It’s unclear if Obama’s maneuvering will do anything to stanch the Palestinian statehood effort or the campaign to isolate Israel. But either way, Obama said, Israel and its supporters should not be alarmed by his remarks about the 1967 lines: All he did was go public with a well-established formula, he said, one that “by definition” means “the parties themselves — Israelis and Palestinians — will negotiate” a new border taking into account “new demographic realities on the ground and the needs of both sides.”

However, a close reading of what Obama said and left unsaid in his two recent speeches hints at a few significant ways that Obama’s approach to resolving the conflict may differ from that of his predecessors. But scant on details, his remarks also raise more questions than they answer.

First, Obama’s call for an Israeli-Palestinian settlement based on the pre-1967 lines with mutually agreed swaps endorses the principle that Israel compensate any annexation of West Bank settlements with territory from Israel proper. While prior administrations had raised the possibility of certain land exchanges, Obama was more public and clear in endorsing that approach as a basis for negotiations.

There’s good news and bad news here for Israelis. On one hand, the position assumes Israel will annex parts of the West Bank; Obama made clear on Sunday that he believes the final border will be “different than the one that existed on June 4, 1967.”

On the other hand, it implicitly embraces the principle that the West Bank belongs to the Palestinians by requiring any Israeli annexation of West Bank land to be compensated. What Obama left unclear was whether he sees rightful compensation as a one-for-one swap, as do the Palestinians.

President George W. Bush never went this far. He offered Israel assurances in a 2004 letter that large Jewish settlement blocs in the West Bank would not be uprooted in a final peace deal, specifying that “a full and complete return” to the pre-1967 border was unrealistic. He did not say that Israel would have to compensate with territory of its own.

“In light of new realities on the ground, including already existing major Israeli populations centers, it is unrealistic to expect that the outcome of final status negotiations will be a full and complete return to the armistice lines of 1949,” Bush wrote in his April 14, 2004 letter to then-Israeli Prime Minister Ariel Sharon.

In 2005, Bush added that a Palestinian state must be contiguous and that any changes to the 1949 armistice lines — the pre-1967 border — must be mutually agreed. But he did not speak of Israel ceding parts of its land as compensation.

While successive Israeli leaders have recognized that the vast majority of the West Bank will become part of a Palestinian state — Ehud Olmert reportedly offered land swaps to compensate for Israeli settlements to be annexed — Israel in principle has not ceded its right to West Bank territory.

Second, Obama said last week that Israel and the Palestinians should agree on borders and security first, and only later try to deal with the difficult issues of Jerusalem and the right of return for Palestinian refugees. In his follow-up speech Sunday, he mentioned neither of those issues.

On the refugee issue, Bush had made clear in ’04 that he felt Palestinian refugees would not have the right to settle inside Israel — something that Israel views as tantamount to destroying the Jewish character of the state.

“It seems clear that an agreed, just, fair, and realistic framework for a solution to the Palestinian refugee issue as part of any final status agreement will need to be found through the establishment of a Palestinian state, and the settling of Palestinian refugees there, rather than in Israel,” Bush said in his 2004 letter.

But Obama failed to make a similar statement. Rather, his remarks appeared to move the refugee issue back to the negotiating table.

In his May 19 speech, he said that “Two wrenching and emotional issues remain: the future of Jerusalem and the fate of Palestinian refugees. But moving forward now on the basis of territory and security provides a foundation to resolve those two issues in a way that is just and fair, and that respects the rights and aspirations of Israelis and Palestinians.”

Speculating during an AIPAC panel discussion right after Obama’s address, Martin Indyk, the former U.S. ambassador to Israel and now a vice president at the Brookings Institution, said Obama did not talk about Jerusalem because he knew his views on the matter would not be welcomed by the pro-Israel audience. Conversely, Indyk said, he believed AIPAC would welcome Obama’s views on the refugee issue.

Perhaps Obama’s mention of refugees and Jerusalem in the same breath in his May 19 speech is a hint that he believes resolving the refugee issue to Israel’s satisfaction will have to be counterbalanced by an Israeli concession on Jerusalem. Here, too, the president’s omissions raise more questions than answers.

In his 2008 speech at AIPAC as a candidate for president, shortly after he had bagged the Democratic nomination following a tough contest with Hillary Clinton, Obama declared that “Jerusalem will remain the capital of Israel, and it must remain undivided.”

But later in the week Obama dialed back that assertion, clarifying that he meant that Jerusalem should not be divided by barbed wire and checkpoints as it was from 1948 to 1967.

“Jerusalem is a final-status issue, which means it has to be negotiated between the two parties,” an Obama campaign spokesman clarified.

Third, Obama both last week and on Sunday repeated a line that surely was grating for Israeli Prime Minister Benjamin Netanyahu to hear: “The United States believes that negotiations should result in two states, with permanent Palestinian borders with Israel, Jordan and Egypt, and permanent Israeli borders with Palestine.”

Netanyahu wants Israel to maintain a corridor of Israeli control along the West Bank-Jordan border, which he views as essential to Israel’s security. Obama’s delineation of Palestine’s borders as sharing a boundary with Jordan suggests that idea is a nonstarter.

Finally, Obama did go a step further than any U.S. president in his explicit call in both speeches for the Palestinian state to be “non-militarized.” While that has been the U.S. understanding from as far back as the Clinton parameters during the Camp David negotiations of 2000, Obama is the first to say so on the record.

On Sunday, Obama also offered the AIPAC audience plenty of other red meat to cheer.

He talked tough on Iran and noted that U.S.-Israeli military cooperation had reached unprecedented levels under his administration. He said that America’s commitment to Israel’s security remains “ironclad.” He pledged that September’s vote at the United Nations would not create a Palestinian state. And he said the Hamas-Fatah reunification pact represents an enormous obstacle to peace.

“No country can be expected to negotiate with a terrorist organization sworn to its destruction,” Obama said. “We will continue to demand that Hamas accept the basic responsibilities of peace: recognizing Israel’s right to exist, rejecting violence and adhering to all existing agreements. And we once again call on Hamas to release Gilad Shalit, who has been kept from his family for five long years.”

So what is the Obama administration’s game plan for the next few months?

Obama declared in both his speeches over the last few days that the United States cannot impose a settlement upon the parties; they must decide on their own to reach accord.

But with events rapidly reshaping the neighborhood around Israel, from regime change in Egypt to the violence in Syria to the recent reconciliation between Fatah and Hamas, is it enough for Obama merely to lay out his vision?

“For us to have leverage with the Palestinians, with the Arab states and with the international community, the basis for negotiations has to hold out the prospect of success,” Obama said Sunday.

With no sign of Israeli-Palestinian negotiations getting back on track, however, the prospect of success appears far off.