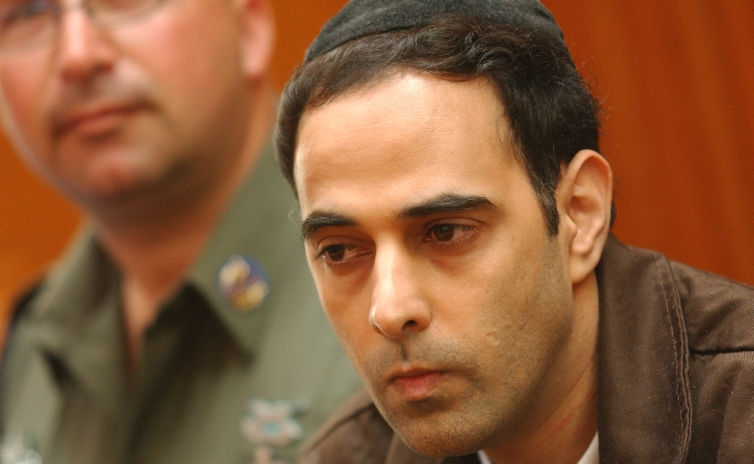 Israel's Supreme Court in February ordered an easing of conditions on Yigal Amir, the Israeli assassin of Prime Minister Yitzhak Rabin, including the ability to have a chevruta, or Torah study partner, for an hour every two weeks. (Flash90)
Advertisement

Give him a hand

Inspired by the dozens of rounds of applause received by Israeli Prime Minister Benjamin Netanyahu during his recent speech to Congress, an Israeli lawmaker has requested that Knesset members be allowed to clap for their fellow lawmakers.

Ayoub Kara, deputy minister for development of the Negev and the Galilee and a member of Netanyahu’s Likud Party, made the request Sunday to Knesset Speaker Reuven Rivlin, The Jerusalem Post reported.

“Prime Minister Benjamin Netanyahu’s speech to the U.S. Congress, and the respect he received when he brought honor to the Knesset and the entire State of Israel, raises questions as to why the accepted procedures of the U.S. House of Representatives are not customary in the Knesset,” Kara wrote.

The naked and the Dead Sea

American photographer Spencer Tunick, who has gained fame for taking photographs of nude crowds at sites around the world, already has more than 3,000 volunteers for a shoot of nude Israelis floating in the Dead Sea.

The Jewish artist visited Israel last month to make a plea for funding for his photo shoot, which he is calling the “Naked Sea” project.

Of the more than 3,000 Israeli volunteers, 700 are students. Tunick had been hoping for a minimum of 500 volunteers.

But he said that if he does not raise $60,000 by June — he already has $46,000 in pledges — he will not go ahead with the project. Tunick plans to shoot the installation in September or October, about a month before the end of voting in the New Seven Natural Wonders of the World online contest.

Tunick said he would like his naked subjects floating in the Dead Sea to be covered in its beneficial black mud.

Tunick recently photographed 5,200 nude Australians on the steps of the Sydney Opera House, one of 75 locations at which he has taken nude photos of crowds.

The governor of the Bank of Israel has said thanks but no thanks to a 70 percent pay hike.

Stanley Fischer supports the pay raise, however, because he believes it will help the government find a strong replacement for him when he steps down, the Israeli business daily Globes reported.

Fischer may be leaving sooner than he thinks, since his name is near the top of the list of possible replacements to head the International Monetary Fund. The deadline for submitting official bids for the position is June 10. Fischer, a former deputy managing director of the IMF, reportedly has been testing the waters.

The Knesset on Sunday raised the monthly salary of the Bank of Israel governor from nearly $11,000 a month to about $18,500. In rejecting the raise, Fischer suggested that it start with the next governor.

Israeli men and women better think twice before they light up — the government has established a separate Health Ministry unit devoted to combating the dangers of smoking.

The new legislation will strengthen the law against smoking in public places and tightly restrict the advertising and marketing of tobacco products.

It also will ban cigarette sales in automated vending machines and require the inclusion of graphic warnings on tobacco products, including photos of black lungs and stained teeth.

Taxes on cigarettes could rise dramatically following a recommendation of Finance Minister Yuval Steinitz scheduled to come before the Cabinet in 90 days.

The law also singles out teachers, who will be prohibited from smoking in educational institutions.

The $2.8 million plan’s goal is to cut down the number of smokers by 8 percent in the next eight years.

Israel’s Prison Service is seeking a study partner for the assassin of Prime Minister Yitzhak Rabin.

Yigal Amir has been in prison since 1995, and is serving a life sentence for the Tel Aviv murder on Nov. 5 that year. He has been in solitary confinement the entire time due to fears that he will spread his ideology to other prisoners and that his life could be in danger from other prisoners.

Israel’s Supreme Court in February ordered an easing of conditions on Amir, including the ability to have a chevruta, or Torah study partner, for an hour every two weeks. He has also been permitted to pray with other prisoners under supervision.

Amir has set down his own conditions regarding his future study partner, including that he be a yeshiva graduate with a similar educational background to Amir’s so that their study will be enriching, according to Ynet.

No fellow inmate has met the criteria and the search reportedly is continuing.

Dean on May 19 completed more than 35 hours of balancing himself on the top of a pole nine stories high that was erected in Rabin Square in Tel Aviv, breaking the record set by Blaine in 2002.

He was lifted to the top of the pole with a crane and spent the 35 hours without food (but with a catheter!). Upon finishing the stunt — he lasted on the pole a shade longer than Blaine’s 35 hours — Dean jumped down into a pile of cardboard boxes.

“It was very hard,” Dean said in Hebrew once he came down from his perch. “I want to tell you only one important sentence: Nothing stands in front of the will.”

Two thumbs up for baby

The newborn daughter of an Israeli couple has gotten two thumbs up from her parents. At least that’s how it appears; her parents have named her “Like” in honor of Facebook.

Lior and Vardit Adler, from Hod Hasharon in central Israel, lifted the name from the popular Facebook feature that allows users to click on the word “like,” which gives a thumbs-up symbol to comments, links and pictures posted by other users.

While many have raised their eyebrows at the name, Lior Adler says it is just a sign of today’s times.

“If once people gave biblical names and that was the icon, then today this is one of the most famous icons in the world,” he told the German news agency DPA. He also joked that the name could be seen as a modern version of the traditional Jewish name Ahuva, which means “beloved.”

Their other two children are named Dvash, which means honey, and Pie.

Following the protests that deposed Egyptian President Hosni Mubarak, an Egyptian man named his daughter Facebook, honoring the social network for the part it played in mobilizing demonstrators.

Adler said he checked to make sure that no other child in Israel shared the name.

He received several dozen “Likes” on his Facebook page following the announcement of the name.

IDF pulls the plug on Internet

The Israel Defense Forces has cut nearly all army computers from the Internet and e-mail, angering its soldiers. The computer cutoff includes Facebook, Twitter, hotmail and gmail.

The severing is part of a new program called Global Village, which is set to increase security and save money.

In recent months, soldiers have jeopardized operations by inadvertently posting information about them to Facebook, while photographs posted to Facebook have not only damaged security but tarnished the image of Israel’s military.

Under the new plan, only a small number of army computers will have Internet access, and even that will be severely restricted, in some cases to just a few army senior commanders.

But some soldiers have circumvented the new restrictions by purchasing Tablet computers with mobile modems, Haaretz reported.

Cutting back on IDF workstations with Internet reportedly also has saved money.

An Israeli bank has substituted a white-bearded dwarf for a popular Israeli actress on billboards in haredi Orthodox neighborhoods.

Bank Hapoalim’s substitution of Dan the Dwarf, who wears a long blue coat and a bright red hat, for Israeli “In Treatment” actress Alma Zack, has raised some hackles, especially because the replacement was highlighted in Israeli blogs just days after a Brooklyn-based haredi Orthodox newspaper deleted the images of U.S. Secretary of State Hillary Rodham Clinton and another female government official from an iconic photo taken in the White House situation room during the killing of Osama bin Laden.

Haredi Orthodox publications traditionally do not print photos of women for modesty reasons.

The bank said in a statement that “Bank Hapoalim respects all its customers, regardless of their religion, race and gender and uses professional judgment only when it comes to advertising.”

Bank officials also pointed out that the actress would not be widely recognizable in haredi Orthodox neighborhoods, whose residents by and large do not own televisions or read popular magazines.

Other famous women, including Tzipi Livni, have been removed from ads presented in haredi Orthodox communities, Ido Kenan reported in his Room 404 blog.