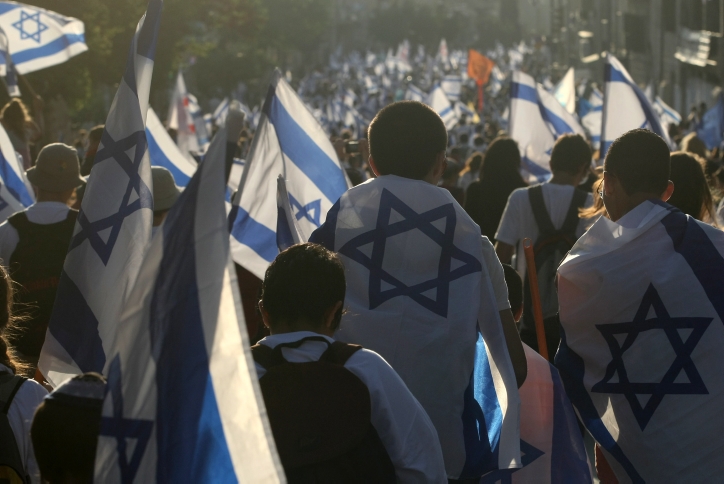 Young Israelis walking through the streets of Jerusalem and waving Israeli flags during a 2011 celebration of Jerusalem Day. (Kobi Gideon/Flash90)
Advertisement

(JTA) — Scattered clashes broke out in neighborhoods surrounding Jerusalem’s Old City during the annual Jerusalem Day march, though the event was mostly peaceful.

Three people — two marchers and one Arab resident — reportedly were lightly injured during stone-throwing clashes by the Old City’s Damascus Gate and in the nearby, mostly Arab neighborhood of Sheikh Jarrah.

Sheikh Jarrah, the site of ongoing tensions between Arabs and Jews, also was the site of clashes between right-wing activists and left-wing demonstrators.

The annual Flag Dance parade commemorating the city’s reunification under Israeli sovereignty in 1967 passed through Sheikh Jarrah en route to the Old City this year.

Police said they arrested 24 people, most of them Jews, for disturbing the peace, The Jerusalem Post reported.

Estimates given for the number of participants in the Jerusalem Day march ranged from 30,000 to 40,000.

An organizer told The Jerusalem Post that the march was rerouted through Sheikh Jarrah because its usual route through downtown Jerusalem along Jaffa Road had been blocked by construction of the city’s light rail line.

“There’s nothing more holy to us than Jerusalem. We’ll protect Jerusalem, its unity, and we’ll build and develop it,” he said.

The yeshiva was the site of a terror attack in 2008 in which a Palestinian gunman killed eight students.