Ahead of Palestinian U.N. gambit, Europe is in play 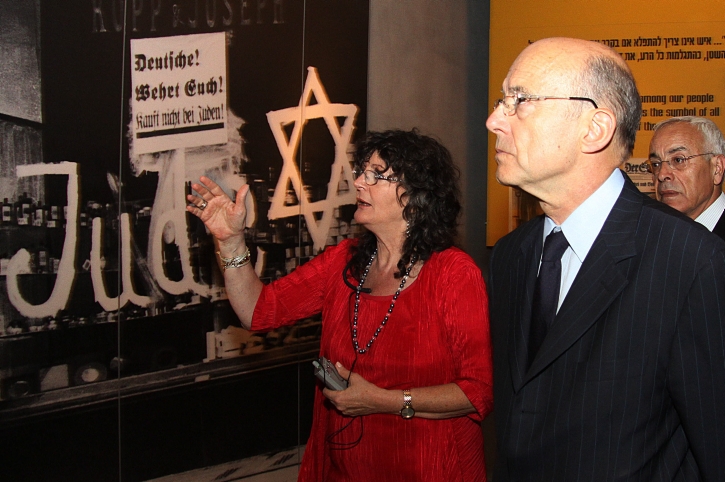 JERUSALEM (JTA) – It was a sign that ties between the Obama and Netanyahu administrations remain strong despite the apparent tensions two weeks ago when the two leaders met at the White House.

On Monday, U.S. Secretary of State Hillary Rodham Clinton shot down a French proposal for renewed Israeli-Palestinian peace talks that had put the Israeli leader in a quandary.

If Prime Minister Benjamin Netanyahu had accepted the French proposal, which included a settlement freeze, his right-leaning coalition partners might have bolted the government. If he refused, it would have made it seem like he was the intransigent party in Israeli-Palestinian negotiations — a perilous position as France and other leading European states consider voting for Palestinian statehood at the United Nations in September.

During a visit to Israel and the West Bank in early June, French Foreign Minister Alain Juppe outlined his plan for restarting the stalled peace process: The goal would be to establish two states for two peoples on the basis of the 1967 lines with land swaps; borders and security would be discussed first, Jerusalem and refugees later. That part of the proposal mirrored Obama’s call two weeks ago for renewed Israeli-Palestinian talks.

But the French proposal also envisaged achieving a full-fledged permanent peace deal within a year and a freeze of any unilateral steps in the interim. For the Palestinians, that would mean not petitioning the United Nations for statehood in September. For Israel, it would mean halting settlement construction in the West Bank.

Juppe invited Netanyahu and Palestinian Authority President Mahmud Abbas to an international conference in Paris in July to kick-start the process. Abbas quickly replied in the affirmative. Netanyahu said he would first consult with the Americans.

The package was attractive to the Palestinians because of its clear focus on the 1967 lines and its relatively short timetable. The sweetener for Israel was the explicit reference to “two states for two peoples,” implying that Israel would be, as Netanyahu insists, recognized as the state of the Jewish people.

Nevertheless, Netanyahu found himself in a bind. He already had said no to negotiations structured that way when Obama raised the issue. Netanyahu insists the Palestinians first recognize Israel as a Jewish state as a sign of readiness to end the conflict. In addition, Hamas, the terrorist organization that is now part of the Palestinian leadership following the recent reconciliation with Fatah, must recognize Israel’s right to exist, renounce violence and accept all previous Israeli-Palestinian agreements before a credible peace process can be contemplated.

But perhaps even more important, Netanyahu has serious issues with the 1967 lines plus land swaps formula. He insists on maintaining an Israeli military presence in the Jordan Valley and, besides the large settlement blocs, he wants to retain security areas along the Samarian mountain ridge, as well as sites of historic importance such as Hebron.

This goes well beyond anything that could be construed as being “based on the 1967 lines.”

Still, despite these very serious obstacles, the prize for taking up the French offer was tempting: Palestinian deferment of plans to seek U.N. membership this year. There was also a big stick: If Netanyahu rejected the French offer, Juppe intimated that France and several of its European allies would vote for U.N. recognition of Palestine.

With Clinton’s nix, Netanyahu is off the hook.

Meanwhile, the Israeli Foreign Ministry has quit trying to prevent the Palestinians from securing the two-thirds majority they need for recognition in the 192-member U.N. General Assembly. Unlike in the U.N. Security Council, where Obama has promised that the United States will veto any unilateral vote on Palestinian statehood, General Assembly votes do not carry the force of international law.

Yet even in the General Assembly, Israel hopes to secure as many “No” votes as possible from democratic countries. This, Israeli officials argue, would carry enormous moral weight.

Thus the European Union, with its 27 democracies, is crucial. Over the past two months, Netanyahu has traveled to Berlin, London and Paris in an effort to convince key European leaders not to back Palestinian U.N. membership. Had he been the one to reject the French offer, his European strategy could collapse.

Netanyahu’s critics say that even if Israel wins this battle, a General Assembly vote favoring statehood will deliver the Palestinians a major diplomatic triumph and possibly trigger a new wave of Arab Spring-style protests in the West Bank.

The Israeli government’s failure to take serious action to pre-empt the Palestinian U.N. move and its consequences has drawn strong domestic criticism in Israel.

The most powerful voice in recent days has been from Meir Dagan, who recently retired from his post at the helm of the Mossad, Israel’s intelligence agency.

Dagan says that Israel should have responded positively to the 2002 Arab peace initiative, come up with an initiative of its own and pressed for a negotiated solution with the Palestinians. He also has expressed deep discomfort with the judgment of Israel’s current political leaders, hinting darkly that they might even contemplate attacking Iran’s nuclear weapons program to divert attention from the United Nations in September.

For now, a Palestinian U.N. move in September is still not a foregone conclusion.

By quashing the French plan, Clinton kept the initiative firmly in Washington, where the Americans are talking to both the Israelis and Palestinians in an attempt to create conditions for a renewal of peace talks that would render the Palestinian U.N. gambit superfluous.

In the next few weeks, in what could be the defining moment of his premiership, Netanyahu will have to decide whether to embrace a last-chance initiative to avert the U.N. imbroglio in September or to stay put and risk the potential diplomatic fallout while keeping his coalition intact.