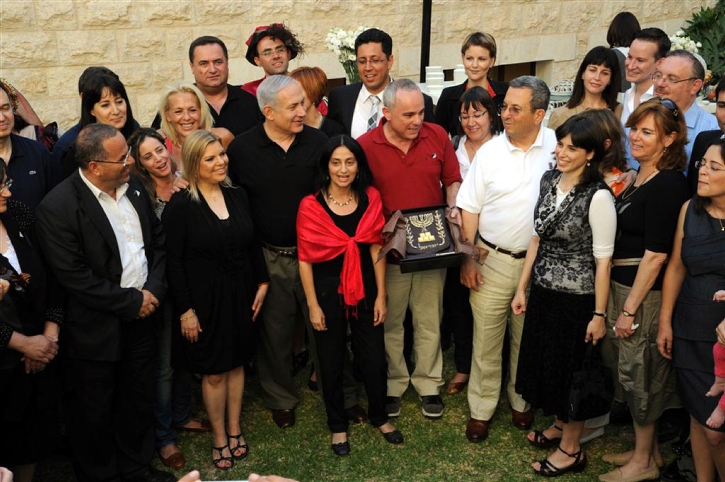 ISRAEL UNDER THE RADAR

Start-ups get leg up in Ra’anana

Start-up companies and developers in Israel will have help getting their latest innovations into the marketplace with the opening of an AT&T innovation center in Ra’anana.

The facility in central Israel was opened with the international corporation Amdocs, which has a site in Ra’anana. It is the second permanent AT&T Foundry innovation center to open worldwide. The first, hosted by Alcatel-Lucent, opened in Plano, Texas, in February.

A third center, to be hosted by Ericsson, will open later this year in Palo Alto, Calif.

Projects at the Ra’anana center are enabling integrated mobile and wired broadband capabilities crossing multiple screens, including smartphones, PCs, televisions and emerging devices, according to AT&T.

“The team in Ra’anana has deep ties with the startup community and specializes in identifying unique technologies that can benefit AT&T and their customers. It offers startups and developers the environment to initiate and advance projects by providing technological expertise to make their idea happen,” said Eli Gelman, president and chief executive officer of Amdocs Management Ltd.

A building from the Byzantine period was unearthed near the northern city of Acre during excavation work to begin the construction of a mall.

The 1,500-year-old public building may have been used as a church in the city that is known from Christian sources, which mention its bishop who took part in formulating the new religion.

“This is an important discovery for the study of Acre because until now no remains dating to the Byzantine period have been found, save those of a residential quarter situated near the sea,” according to Nurit Feig, the excavation director of the project for the Israel Antiquities Authority.

In addition to the structure, an abundance of roof tiles, parts of marble ornamentations, pottery and coins also were found, which all point to a public structure, possibly a church, that served the city in the Byzantine period. Terra cotta pipes survived below the wall levels and mosaic pavements adorned the floor in one of its rooms. A well also was found in one of the courtyards of the building.

Few Byzantine remains have been found due to the destruction wreaked on the area by groups that came in later periods.

Come for Shabbat, stay for the politics

Sara Netanyahu, the wife of the prime minister, hosted members of the ruling government coalition for a Shabbat in the northern city of Safed.

The weekend reportedly was planned to boost spirits in the coalition and engage in team building. Prime Minister Benjamin Netanyahu and Defense Minister Ehud Barak were not allowed to spend Shabbat for security reasons, though they were seen participating in Safed activities on Friday, according to reports.

The 40 lawmakers and their spouses who attended the weekend event toured the Old City of Safed and ate Shabbat meals together. Only children under a year old were included in the weekend, so Yisrael Beiteinu lawmaker Anastasia Michaeli and her husband, for example, found baby-sitters for their eight children, The Jerusalem Post reported.

Some lawmakers who are at odds with Netanyahu or with the coalition reportedly did not participate.

Religious Israeli farmers refused to plant a new strain of Israeli wheat named in honor of the current pope.

The Benedict XVI wheat is a hybrid of two existing Israeli wheat strains developed by Uri Kushnir of the Department of Plant Sciences at the Volcani Center. Its development was speeded up at the request of Israeli President Shimon Peres, so that it could be presented to the pope during his visit to Israel in 2009.

But religious farmers who grow wheat near Beit Shean refused to purchase and plant the seeds until its name was changed officially to Binyamin, Ynet reported.

A major Italian pasta firm apparently has no such problem with the Benedict name and has purchased the seeds in order to grow the wheat locally, according to Ynet.

Religious and political sites in Israel are no longer the only places that Birthright Israel wants young Jews to see in the Jewish state. Now the participants on the free trip also will visit the country’s high-tech capitals Ra’anana and Herzliya.

The itinerary addition is meant to connect young Diaspora Jews with Israel’s future and to capitalize on the popularity of “Start-Up Nation,” a book by Dan Senor and Saul Singer.

Participants reportedly have given mixed reviews to the visits.

“I’d rather have been hiking somewhere,” one told The Jerusalem Post.

Everyone has a soul mate, the saying goes — and apparently so do plenty of cities.

In an alliance signed last month, Bnei Brak and Lakewood pledged to jointly develop the Torah centers in their cities.

The mayors of the two cities, rabbis, council members and representatives of the U.S. Embassy in Israel were on hand for the alliance signing at Bnei Brak City Hall, Ynet reported. A ceremony also will be held in New Jersey.

Panels appointed by the mayors are working to suggest ideas for activities focusing on education, spiritual issues, Jewish culture, health and welfare.

The country’s Arava Power earlier this month unveiled the country’s first commercial solar power plant, one of about 50 photovoltaic power fields that the company plans to build throughout the southern Negev Desert by the end of 2014.

The $30 million plant is located in Kibbutz Keturah, about 50 miles north of Eilat, which gets approximately 350 days of direct sunlight each year.

The Israeli government plans to provide 10 percent of the country’s energy using solar and other renewable sources by 2020.