An Israeli’s great biking adventure: Around the world on two wheels 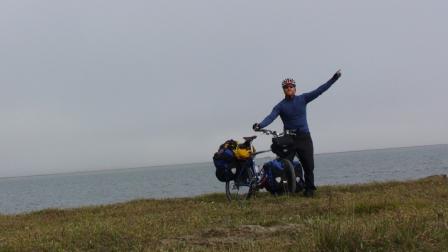 Roie "Jinji" Sadan at the Arctic Ocean in 2007, getting set to start his four-year biking journey around the world. (Courtesy of Roie Sadan)
Advertisement

Roie “Jinji” Sadan and Orly Tal, a blind Israeli woman, with their tandem bike on the Great Ocean Road in Australia on one of the last legs of his adventure, June 2011. (Courtesy of Roie Sadan)

After all, Sadan had a bike he called Emunah — Hebrew for “faith.”

In Melbourne recently on the eve of the last leg of his 39,000-mile trek, the 29-year-old Israeli recalled cycling through the Mexican desert on New Year’s Day 2008. Suddenly a car pulled up.

“I didn’t know Spanish; I thought they wanted to help me,” Sadan recalls. “Then one of them showed me a gun and I started to understand what’s going on.”

The bandits stole clothes, money, credit cards and supplies, as well as a tent and sleeping bag — but not his 27-gear, custom-built, blue-and-white Thorn Nomad bicycle.

“From then on I called it Emunah,” he says.

Within an hour his faith was rewarded. Two American surfers passed by and drove Sadan to San Diego, where he restocked with supplies. Another American, having heard a TV interview, drove him back to Mexico so he could continue his adventure.

The incident served as a microcosm for his arduous journey of self-discovery: nightmarish episodes and seeing humanity at its glorious best.

Now that he’s within striking distance of the finish, Sydney’s Opera House, Sadan says he intends to use his experience by becoming a motivational speaker and transforming his diaries into a book that he hopes will inspire people to follow their dreams. And there is perhaps his biggest challenge — settling down.

His journey started with a simple question. “I thought, what’s the biggest adventure?” says Sadan, who lives in Oranit, a West Bank settlement of 6,000 near Kfar Saba.

He aimed to cycle around the world — not for any records but to discover himself. Sadan would prepare a year and a half for the trek, including walking the length of Israel and training several months in India in the Himalayas.

On the adventure, Sadan could have quit during any number of nightmares. In Alaska, he lost more than 30 pounds traveling on a dirt track in subarctic conditions while passing just one roadhouse in 10 days. In Peru, he was bitten by a wild dog. In Mozambique, he contracted malaria.

The journey has cost about $60,000 — part of it covered by his sponsor, the Israeli water company Eden Water — but it almost cost him his life in Bolivia.

“I told myself these nightmares are necessary for me to fulfill my dream. If a nightmare is part of a dream it’s OK.”

And then there was the isolation.

“In the middle of the desert in China, it’s minus 20, you can’t sleep, there’s no one to say goodnight to,” says Sadan, dubbed Jinji (Hebrew for redhead) because of his ginger beard. “But I never thought of quitting, not once, never.”

“People who have nothing want to give you everything,” he says.

Sadan recalls a tribal leader in Lesotho who invited him to share food — a meal of cat. With the language barrier a problem, Sadan pointed to the pot.

His host shook his head and responded, “Meow, meow.”

In Outback Western Australia, a Palestinian offered him refuge — a poignant encounter since Sadan spent some of his army service in the Gaza Strip, where his host was born.

“He’s my first Palestinian friend,” Sadan says. “It was an emotional moment.”

The Gaza Strip is also where Israeli soldier Gilad Shalit has been held captive for five years.

“For four years I’ve enjoyed my choices and my freedom, and on the other scale you have Gilad, so sometimes you need to think about the lowest value when you are at the top of Everest,” Sadan says.

Upon arriving in Melbourne, Sadan joined an event marking the fifth anniversary of Shalit’s capture and spoke to the Victorian Parliamentary Friends of Israel group.

Sadan never expected to become an ambassador for Israel, but he quickly realized that his presence — especially in countries where there are neither Jews nor Israelis — was debunking the myth that all Israelis wield M-16 rifles.

“I’m coming with a bicycle and a smile,” he says. “Most people really welcome Israel. I didn’t feel hatred.”

During a brief stop home to Oranit in 2009, Minister for Diaspora Affairs Yuli Edelstein gave him the government’s blessing to spread his goodwill message. Since then he has visited numerous Israeli embassies and given lectures to more than 1,500 children, as well as interviews to scores of media outlets about the “real” Israel.

Of all his challenges, the last may have been the most difficult: cycling the Great Ocean Road from Adelaide to Melbourne. Sadan rode tandem with Orly Tal, a blind Israeli who had contacted him via his website to ask if she could join him for part of his Australian adventure.

“She saw more than many people I know who have two working eyes,” Sadan says. “But it was more challenging than any desert I crossed.”

As the finish line beckons, Sadan says he is “excited,” adding that “it’s also a weird feeling because this is the end.”

He has no plans to fly into Ben-Gurion Airport — too conventional.

“I will fly to Jordan and cycle to Jerusalem, to the Kotel,” he says. Sadan expects many dignitaries, perhaps even Israeli President Shimon Peres, to attend the “big event.”

So in a journey of self-discovery, what has he learned about himself?

“That my heart is the best compass. That I have a different lens,” Sadan says. “And I learned I’m soft but unbreakable, like most Israelis.”

Now, however, having sacrificed two relationships on the road, Sadan says he is ready for a different challenge: “I’m ready to see if I’m capable of the biggest journey of life — family life.”