A primer on Palestinian statehood 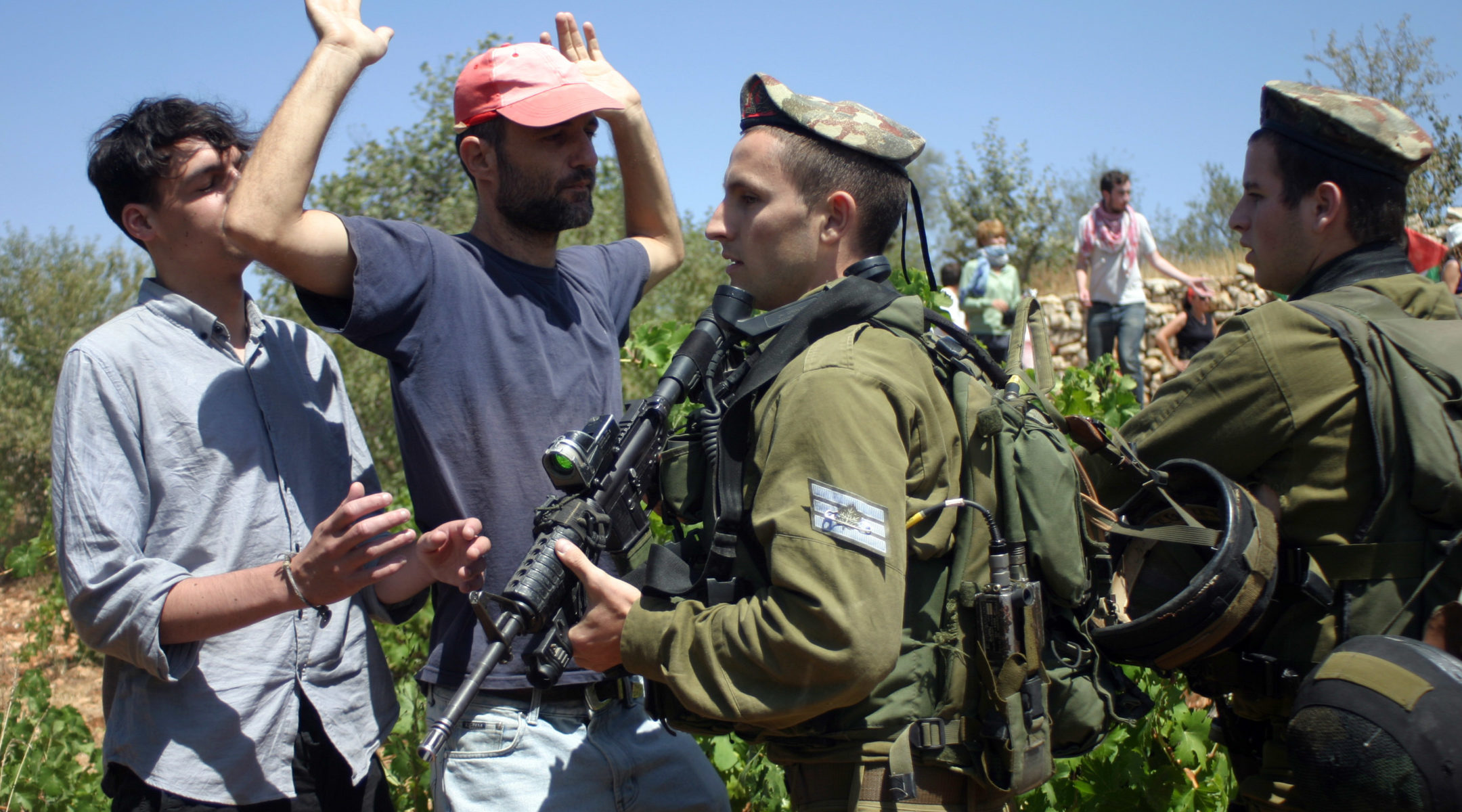 Israeli soldiers scuffling with Palestinians during a demonstration near the West Bank village of Beit Omar, Aug. 13, 2011. Some analysts have warned that a U.N. vote on Palestinian statehood could set off a new wave of Palestinian-Israeli violence. (Najeh Hashlamoun / Flash 90)
Advertisement

The long-anticipated request will kick off a chain of events that some analysts are warning could result in a new paroxysm of violence in the Middle East.

What do the Palestinians want the United Nations to recognize?

The Palestinians want recognition of the state of Palestine in the entirety of the West Bank, Gaza and eastern Jerusalem. The West Bank — an area controlled by Jordan from the end of Israel’s War of Independence in 1949 until it was captured by Israel in the 1967 Six-Day War — includes lands on which Jewish settlements now sit. Eastern Jerusalem was effectively annexed by Israel, but the international community views it as occupied territory. In total, more than 600,000 Jews reside in eastern Jerusalem and the West Bank.

What’s the legal process for becoming a state?

The U.N. Security Council’s approval is required to become a U.N. member state. The United States, which is one of the 15-member council’s five permanent, veto-wielding members, has promised to veto a Palestinian statehood resolution.

Is there a way for the Palestinians to overcome a U.S. veto?

Not in the Security Council. However, the Palestinians still could seek statehood recognition at the U.N. General Assembly. While a General Assembly vote in favor of Palestinian statehood would not carry the force of law, the passage of such a resolution would be highly symbolic and represent a significant public relations defeat for Israel.

Is there any benefit short of full statehood recognition that the Palestinians can obtain at the United Nations?

Yes. The Palestinians already have non-member permanent observer status at the United Nations, which they obtained in 1974.

This time, the General Assembly could vote to recognize Palestine as a non-member U.N. state, which would put Palestinian U.N. membership on par with that of the Vatican. While being a non-member state wouldn’t give the Palestinians much more than they have now as a non-state observer, it would be another symbolic victory.

If the Palestinians can get a two-thirds majority in support of statehood in the General Assembly , they also could put forward a so-called Uniting for Peace resolution. This nonbinding, advisory resolution could provide legal cover to nations wanting to treat Palestine as a state — for example, allowing sanctions and lawsuits against Israel to go forward. The Uniting for Peace option was first used to circumvent a Soviet veto in the Security Council against action during the Korean War, and it was employed during the 1980s to protect countries that sanctioned apartheid South Africa from being sued under international trade laws.

Why are the Palestinians seeking statehood recognition from the United Nations rather than negotiating directly with Israel?

Abbas essentially is gambling that the U.N. move will give him more leverage vis-a-vis Israel, making it more difficult for the Israelis to stick to their current negotiating positions and establishing the pre-1967 lines as the basis for negotiations.

What tools does Israel have to respond to the Palestinian bid?

Israel’s strategy now is trying to persuade as many nations as possible — as well as the Palestinians — that a U.N. vote favoring Palestinian statehood would set back the peace track. The argument is that it would make it less likely that Israeli-Palestinian negotiations would succeed, forcing Israel to dig in its heels.

Beyond that, Israeli experts have warned, Israel may consider the unilateral Palestinian bid for U.N. recognition an abrogation of the Oslo Accords, which stipulated that the framework for resolution of the conflict be negotiations between the two parties. If the Oslo Accords, which provides the basis for the limited autonomy the Palestinians currently have in the West Bank, are nullified, Israel may re-occupy portions of the West Bank from which its forces have withdrawn, end security cooperation with the Palestinian Authority and withhold hundreds of millions of dollars in tax money it collects on behalf of the Palestinian Authority.

What are some of the other possible negative consequences for the Palestinians of U.N. statehood recognition?

The U.S. Congress has threatened to ban assistance to the Palestinian Authority if it pursues recognition of statehood at the United Nations. That could cost the Palestinians as much as $500 million annually, potentially crippling the Palestinian government.

What’s the plan for the day after the U.N. vote?

It’s not clear. The Palestinian leadership doesn’t seem to have a plan. The Palestinian public is expected to stage mass demonstrations. Israel is preparing for a host of worst-case scenarios, including violence.

If the United Nations does endorse Palestinian statehood in some form, it will be seen as a public relations victory for the Palestinians. But in the absence of progress on the ground in the Middle East, a U.N. vote could set off popular Palestinian protests against Israel that could escalate into another Palestinian intifada.

No one knows what another Palestinian intifada will look like. It’s possible that soon after a U.N. vote, Palestinians will march on Israeli settlements and military positions much like Palestinians in Syria and Lebanon marched on Israel’s borders in mid-May to commemorate Nakba Day — the day marking the anniversary of the “catastrophe” of Israel’s founding.

Or a U.N. vote could unleash a new wave of violence, with attacks and counterattacks that destroy the relative calm that has held between Israel and West Bank Palestinians since the second intifada waned in 2004.

The outbreak of violence, however, could undermine Palestinian interests. In the relative absence of Palestinian terrorism in recent years, the Palestinians have managed to get increased economic assistance, established upgraded diplomatic ties with nations throughout the world, rallied more global support for their cause, and seen a considerable rise in their GDP and quality of life in the West Bank. They don’t want to throw that all away.

That may leave the Palestinians and Israel back where they started before talk of U.N. recognition began: at a standstill.