Just how expensive is it to live in Israel? 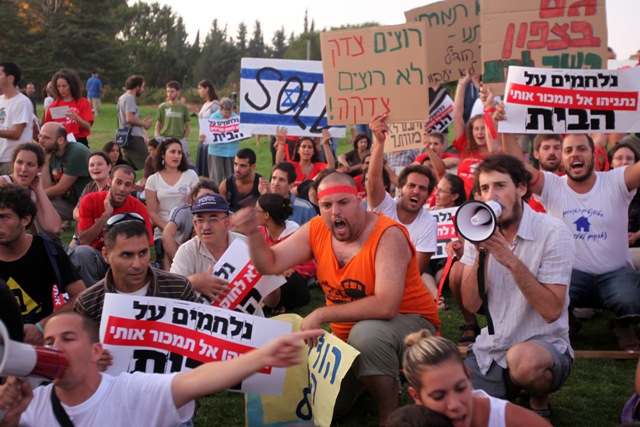 Some of the hundreds of Israelis protesting against the country's soaring cost of living in front of the Knesset in Jerusalem, Aug. 2, 2011. (Yossi Zamir/Flash 90 )
Advertisement

JERUSALEM (JTA) — What began in Israel in June as a Facebook-driven rebellion against the rising cost of cottage cheese, then morphed in July into tent encampments protesting soaring real estate costs, has since turned into a full-scale Israeli social movement against the high cost of living in the Jewish state.

From Tel Aviv’s tent-filled Rothschild Boulevard to marches in Beersheva, hundreds of thousands of Israelis have participated in one protest or another. The movement’s targets have expanded from housing and cheese prices to everything from the costs of child care and gas — not to mention salaries.

All this begs the question: Just how expensive is it to live in Israel?

A close examination of some key metrics show that compared to the United States and Europe, Israeli costs of living are a mixed bag. Salaries are lower, but so are health care costs. Consumer goods and services costs are nearly double those in the United States, and owning a car can run about six times as much relative to one’s salary.

So how do Israelis make it? Israeli retailers and banks offer easy credit on everything from big-ticket items like summer vacations to everyday purchases like groceries; all can be paid in monthly installments. The result is that many Israelis are perennially in debt and are increasingly frustrated by their inability to cover costs with their monthly paychecks.

Here’s a closer look at some of the costs of living in Israel.

The most expensive and desirable places to live in Israel are in the center of the country, where the vast majority of the population resides and works.

Mortgage rates are about 4.5 percent, according to Friedland, but the required down payment is usually about 40 percent.

“Young couples are getting the money from their parents because they don’t typically have savings like that,” she said.

As the economist Daniel Doron noted recently in The Wall Street Journal, “A small apartment can cost the average Israeli worker 12 years in annual salary.”

In Israel, the average salary is about $2,572 per month, and the average income for a tfamily with two wage earners is approximately $3,428 per month, according to Israel’s Central Bureau of Statistics.

Teachers and nurses earn abound $1,666 a month, making Israeli teachers’ salaries among the lowest in the world, according to a recent report by the international Organization for Economic Cooperation and Development (OECD).

Business managers, computer engineers and lawyers have some of the highest median salaries in Israel. A lawyer with five years’ experience can make $5,500 to $6,500 per month, and top associates earn about $8,571 per month, according to Dudi Zalmanovitsh, who runs the Tel Aviv law consulting firm GlawBAL. Technology professionals are some of the highest paid in Israel, with technical writers and software engineers earning between $2,500 and $3,500 a month, and managers making upward of $10,000 a month.

Doctors, most of whom work at clinics and hospitals, earn $6,000 to $7,000 a month, unless they also have a private practice.

With a tax rate of 78 percent on new cars, a lack of competition in the import market and high auto insurance costs — not to mention the price of gas — owning a car can be one of the most expensive things for an Israeli.

As most Israelis earn about one-third of their American counterparts, Israelis may spend more than six times as much of their monthly salaries on car ownership as the average American.

The alternative — public transportation — is cheap by comparison in Israel, though the network of mass transit is much less developed here than in America or Europe.

A small but growing number of Israelis commute by train, but most need to take a bus to complete their commute. Buses are subsidized and therefore relatively cheap. Within cities, bus fare costs about $1.51 per ride or $65 for a monthly pass.

Israel’s socialized health care system is considered among the world’s best, and taxes pay the lion’s share of costs. Based on figures from the National Insurance Institute, the health care costs deducted from the average paycheck are between 3 percent and 5.5 percent, estimates Dr. Michael Cohen, who runs an HMO in the coastal city of Netanya.

With a system of universal health care run by private corporations, all citizens are entitled to the same uniform package. Whether self-employed or employed by a company, every citizen pays a basic health insurance rate to one of the four HMOs, which are heavily regulated by the government and subsidized.

For Israelis who need to visit the doctor, require fertility treatment or visit the emergency room, the extra costs are minimal. Medications are cheaper in Israel than in the United States because they are subsidized by the HMOs.

Many Israelis choose to expand their coverage with private health insurance that offers more access to private care or more comprehensive coverage. Private insurance costs a fraction of what it costs in the States.

“The working poor are much better off here because if someone gets sick, they still get full hospital treatment for what would be very expensive in the U.S.,” Cohen said.

Israel is more like Europe than America on taxes. The top rate of income tax is 45 percent (it was 50 percent until 2003). The value added tax, or VAT, which amounts to a sales tax, is 16 percent. That’s considered regressive because rich and poor pay the same rate.

Education is one area in which Israelis pay considerably less than Americans.

Tuition at Israel’s renowned public universities is about $2,714 per year, thanks in large part to government subsidies. At Israel’s lesser-known private colleges, tuition costs about $8,571 each year. Compared with other developed countries, Israel ranks eighth out of the OECD’s 26 countries for tuition rates.

Those paying tuition for Jewish day school in America would save a bundle in Israel. Public schools — whether secular, Modern Orthodox or haredi Orthodox — are free. However, parents must pay service fees for field trips and special events, are responsible for busing costs and must pay for books.

The growing number of semi-private schools that offer special pluralistic, democratic or religious curricula charge annual tuitions ranging from $800 to $1,600, and boarding schools charge $3,000 to $5,000 per year.

Because the traditional Israeli primary school day is short, often ending before 2 p.m., many parents shell out money for afternoon childcare programs or afterschool activities.

The most expensive part of child rearing may be day care for the under-3 set. Some day care centers cost $630 a month for private toddler day care. Once children turn 3, they can take advantage of the public school system and day care centers that charge as little as $257 a month for a six-day, six-hour program.

Israel’s social protest movement began with an investigative report by the Globes business daily on food prices. Globes found that prices for basic food products were two to three times higher in Israeli stores than in other Western countries.

An 8-ounce container of cottage cheese costs $1.68; a pound of hummus costs $4.54; 2 liters of orange juice — in a country that exports oranges — costs $6.54; 2 pounds of rice costs $1.94; and a 13-ounce container of Israeli Osem soup nuts costs $4.54 — more than it costs in American stores that import the soup nuts from Israel. A 6-ounce can of Israeli-made sunscreen spray can cost approximately $40.

“Prices have gone above what the middle class and weaker classes can afford,” said Rami Levy, who owns 22 supermarkets nationwide. He attributed the rise to Israeli supermarket chains that collude to set prices.

“I started my business with the goal of selling to my customers at wholesale prices,” said Levy, who started with a stall in Jerusalem’s open-air Machane Yehudah market. “I wanted them to be able to buy what they needed and still have money left at the end of the month.”