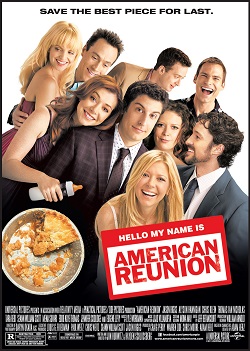 The 4th* film in the American Pie series is set to hit the box office in about 7 months, and the first trailer is already out.

One of the main actors, Jason Biggs, is known for his portrayal of Jewish characters — including American Pie‘s Jim Levenstein, who is too Jew to be true. But Biggs is actually Catholic. Interestingly enough, Jim’s wife Michelle is not Jewish, but the actress who plays her, Alyson Hannigan, is.

Who else is Jewish? Eugene Levy, who never gets tired of playing the exact same characters in every movie and also Natasha Lyonne, who played Jessica (Tara Reid’s friend) and hasn’t done much since the original film, except maybe get a DUI and be hospitalized from time to time.

But that’s not all.

The directors, Jon Hurwitz and Hayden Schlossberg, who also directed Harold & Kumar Go to White Castle, are both Jewish, and Adam Herz, who wrote the original screenplay of American Pie, is also Jewish.

Don’t you feel proud that all this magnificent classy humor was written, produced, directed and played by Jews? I know I am.

* I know there were more American Pie movies that weren’t a part of the original four. They don’t count, I don’t care how many times Eugene Levy was awkward about sex in them.