Man to be a mom, high-tech poop, gender-separate beach 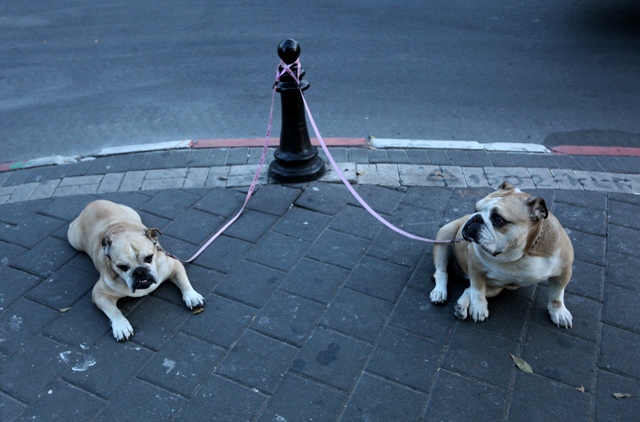 Owners of dogs in Petach Tikvah would have a duty to keep their pets' poop off the street under a City Council proposal. (Moshe Shai / Flash90)
Advertisement

Division of labor: Man to be a mom

An Israeli man is pregnant and soon will give birth.

The man, 24, was a female who underwent a sex-change operation. He is married to another man and is entering his eighth month of pregnancy, Yediot Achronot reported. He wears a goatee and looks like a man, according to the newspaper.

While the man had his breasts removed three years ago, his reproductive organs remained intact. He is the first Israeli transgender to ever achieve pregnancy.

The pregnancy is progressing normally, according to the report.

Petach Tikvah dog owners better watch where their dogs leave their poop — it may be used as evidence against them.

A new law proposed by the City Council would allow city dog inspectors to test the DNA of dog excrement left in the streets and send a ticket to the animal’s owner.

A DNA database would be collected from the dogs’ saliva, likely collected when the pets come in for their yearly rabies shot, The Jerusalem Post reported.

Chabad of Rechavia, serving downtown Jerusalem, moved into a  prime location in the Windmill of Rechavia building next to the Kings Hotel and across the street from the prime minister’s official residence.

The new Chabad house, in one of the capital’s most central and busiest locations, will serve Jerusalemites and tourists.

Veteran Israeli actress Helen Meron has qualified for the Guinness World Record for “longest career as a theatrical actress.”

Meron, who at 87 is currently performing in a Cameri Theater play in Tel Aviv, first appeared on stage at the age of 4. She has been nicknamed the “first lady of Israeli theater.”

The Germany native came with her family to Palestine in 1933.

No sex on the beach

Just days after a photo shoot of hundreds of naked Israelis at the Dead Sea, a new gender-separate beach opened.

The $3.4 million project is meant to allow the religiously observant community to enjoy the Dead Sea’s salty waters, Israel Hayom reported. Project leaders have promised that entry to the beach, the first segregated by gender in the area, will be free and stay open all day.

The new beach was built on land owned by the Tamar Regional Council, which expressed its opposition to the Spencer Tunik photo shoot last month.

First female sapper on the job

Gawi told Ynet that she decided to become a bomb disposal specialist because she wanted “to do something challenging and different,” as well as to blaze a trail for other women. She previously served as a combat soldier in the Israeli army.

She was trained to defuse bombs, and handle explosives and weapons.

A set of Israeli quadruplets had a bar mitzvah in Jerusalem.

Benzi, Yosef, Shlomo and Yishai Mizrachi celebrated their bar mitzvah last month with a service at the Western Wall and a huge party at a hall in Jerusalem.

About 500 guests attended the party, according to reports. The boys attend different schools, and each could invite 30 classmates and teachers to the bash, at which they performed religious songs together.

The brothers have seven other siblings, including a set of twins. Their mother told the Jewish Chronicle that she did not undergo any fertility treatments in order to conceive the boys.

Each boy received a set of four species for Sukkot in honor of their quadrupleness.

Israel’s Cable and Satellite Broadcasting Council has granted a license to a group of investors to operate an Arabic-language cable and satellite channel.

The channel, which will be launched in January, will be free and available on local satellite and cable company menus. The Hala TV group, which received the license to operate the channel, has been working on pilot episodes of a children’s show, news programs and lifestyle shows.

Two previous attempts to set up a permanent Arabic-language channel on Israeli TV fell through.