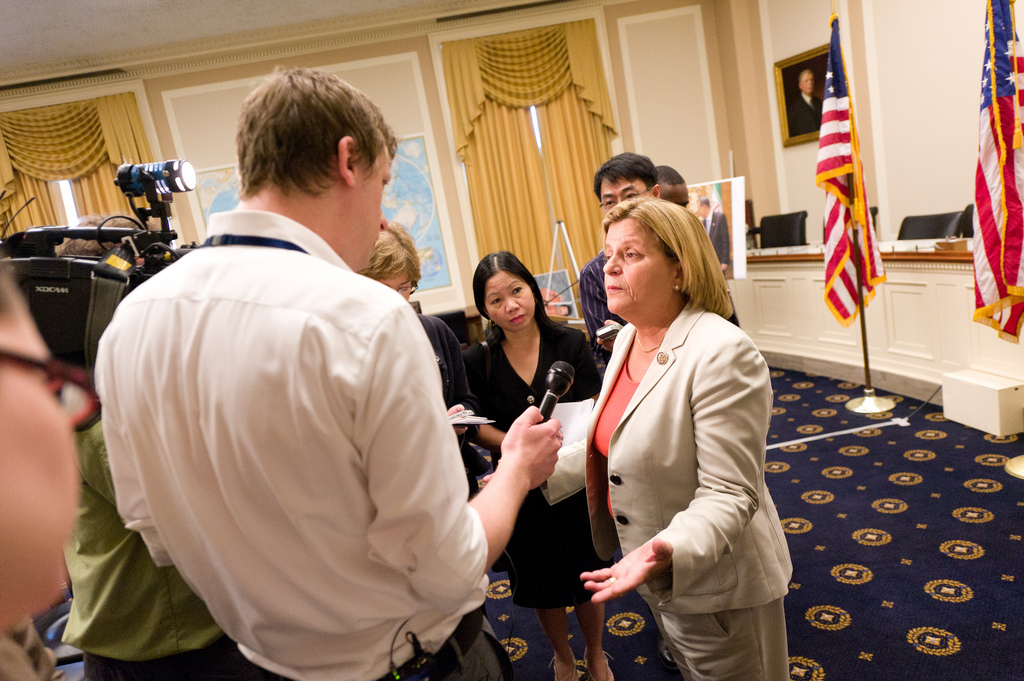 WASHINGTON (JTA) — If the Palestinians don’t pull back from their statehood push, congressional cuts in aid are inevitable, U.S. lawmakers say. Just how comprehensive such cuts will be, however, could end up depending on Israel’s stance on the issue.

Lawmakers, lobbyists and congressional staffers told JTA that hundreds of millions of dollars in assistance for the Palestinians are on the chopping block because of the Palestinian leadership’s formal request last month for U.N. membership in the absence of negotiations with Israel.

“If they’re not going to negotiate in good faith, I don’t want American money to go to them,” said Rep. Eliot Engel (D-N.Y.), a veteran member of the House of Representatives Committee on Foreign Affairs.

The key to how much gets cut, a number of lawmakers and congressional staffers say, is what Israel advises.

Insiders say Israel is wary of cutting off the $150 million that the Palestinian Authority receives in security assistance from the United States. Israel believes that the PA’s fledgling police force — trained in a program structured by U.S. military personnel — has proven effective in keeping the West Bank quiet.

Engel suggested he would be willing to make an exception for security assistance.

“We don’t want security arrangements between Israelis and the Palestinians to blow up,” Engel said. “I would not be in favor of giving them money for anything else.”

Lawmakers are meeting behind the scenes with Israeli diplomats in delicate negotiations over sustaining the security aid. Insiders described a conundrum for the Israelis: Israel, through its diplomats and supporters, has tacitly encouraged congressional threats to cut funding as a means of pressuring the Palestinian leaders to abandon their statehood push and on-again, off-again unity talks with Hamas.

At the same time, Israel also has publicly backed funding for security assistance and infrastructure building.

“Israel calls for ongoing international support for the PA budget and development projects that will contribute to the growth of a vibrant private sector, which will provide the PA an expanded base for generating internal revenue,” Israel’s Foreign Affairs Ministry said in a report to the ad hoc committee of nations that help fund the Palestinians. The report was submitted Sept. 18, just five days before the Palestinians submitted their statehood bid at the United Nations.

Such mixed messages are no longer sustainable now that the Palestinian Authority has gone to the U.N., congressional insiders told JTA. If the Israelis want continued security funding for the Palestinian Authority, they have to explicitly say so in order to give political cover to lawmakers — particularly Jewish Democrats, who will be blasted by Republicans for any generosity to the Palestinians in the wake of their U.N. push.

An Israeli official said that Israel would not comment on internal congressional deliberations. However, the official did note that the Israeli submission to the ad hoc committee was made before the Palestinians made their U.N. push. The Israelis had warned the Palestinians that such a push would have consequences.

U.S. lawmakers who strongly backed the Bush administration’s effort in 2007 to increase funding for the Palestinians to $400 million per year — up from very occasional bursts of $20 million — either have been silent or have supported cutting off the Palestinians. Their ranks include leading Jewish Democrats.

Opposition to continued funding so pervades Congress that pro-Israel witnesses who testified early in September before the House Foreign Affairs Committee in support of sustaining funding were taken aback by the pushback from the committee’s members.

The manifold increase in American funding four years ago was a recognition of the moderation of PA President Mahmoud Abbas relative both to his late predecessor, Yasser Arafat, and his Hamas rivals, who had just driven his Fatah movement out of the Gaza Strip by force. The annual American aid has since increased to $500 million to $600 million.

Much of the aid that would be least controversial to cut — the $200 million to $250 million that goes directly to the Palestinian Authority to help maintain its institutions and pay its salaries — already has been disbursed for this year. Given the mood in Congress, it likely won’t be reapproved for the next fiscal year, although Obama administration officials have suggested they will ask.

“We are continuing intensive consultations with the Congress on this money because we feel that U.S. support for Palestinian institution-building is a vital piece of what we’re trying to do here,” State Department spokeswoman Victoria Nuland said Monday in her daily briefing for reporters. “We’re trying to prepare the ground for a successful and stable peace.

“This money goes to establishing and strengthening the institutions of a future Palestinian state, building a more democratic and stable and secure region. We think it is money that is not only in the interest of the Palestinians, it’s in U.S. interest and it’s also in Israeli interest, and we would like to see it go forward.”

Capitol Hill insiders said that Congress might stop short of an absolute cutoff in assistance and instead may look at increasing congressional oversight and restricting presidential waivers enabling assistance. Much depends on how close the Palestinians come in the next few months to returning to talks.

Rep. Kay Granger (R-Texas), the chairwoman of the foreign operations subcommittee of the House Appropriations Committee, joined with Rep. Nita Lowey (D-N.Y.), the subcommittee’s ranking member, in writing two letters to Abbas earlier this year warning that the statehood push would result in a cut to economic assistance funding.

Granger told JTA that she repeated the warning in a meeting she had in August with PA Prime Minister Salam Fayyad.

“We have not changed our position at all on the withholding of funds,” she said, explaining that 2012 economic and humanitarian assistance was in danger of being severed unless the Palestinians return to direct talks with Israel.

“We are hopeful that they will return to the peace process, “ Granger said.

Security funds would be affected only if the Palestinian Authority united with Hamas, she said.

Rep. Ileana Ros-Lehtinen (R-Fla.), the chairwoman of the Foreign Affairs Committee, also has placed a hold on the humanitarian funding, in part because of concerns that it might end up benefitting Hamas. Administering aid programs in the Gaza Strip is nearly impossible without the approval — and at times the cooperation — of the terrorist group.

“There is an informational hold on the funding,” a statement from the committee spokesman said.

Ros-Lehtinen and other members “are seeking further details about how funds have been used in the past, how they will be used, safeguards, and the system in place to phase the Palestinians away from dependency on the U.S.,” the statement said. “This is a tool of Congressional oversight. Additionally, Members believe that the funding cannot be considered in a vacuum, and that the PA’s activities at the U.N., its arrangement with Hamas, and its failure to recognize Israel’s right to exist as a Jewish State must all be taken into consideration.”

Such withholdings in the earlier part of the last decade drew condemnation overseas because they affected NGOs that administer food and medical aid to children. One pro-Israel insider said that this time, Europeans have shown a readiness to fill the gaps in humanitarian aid.