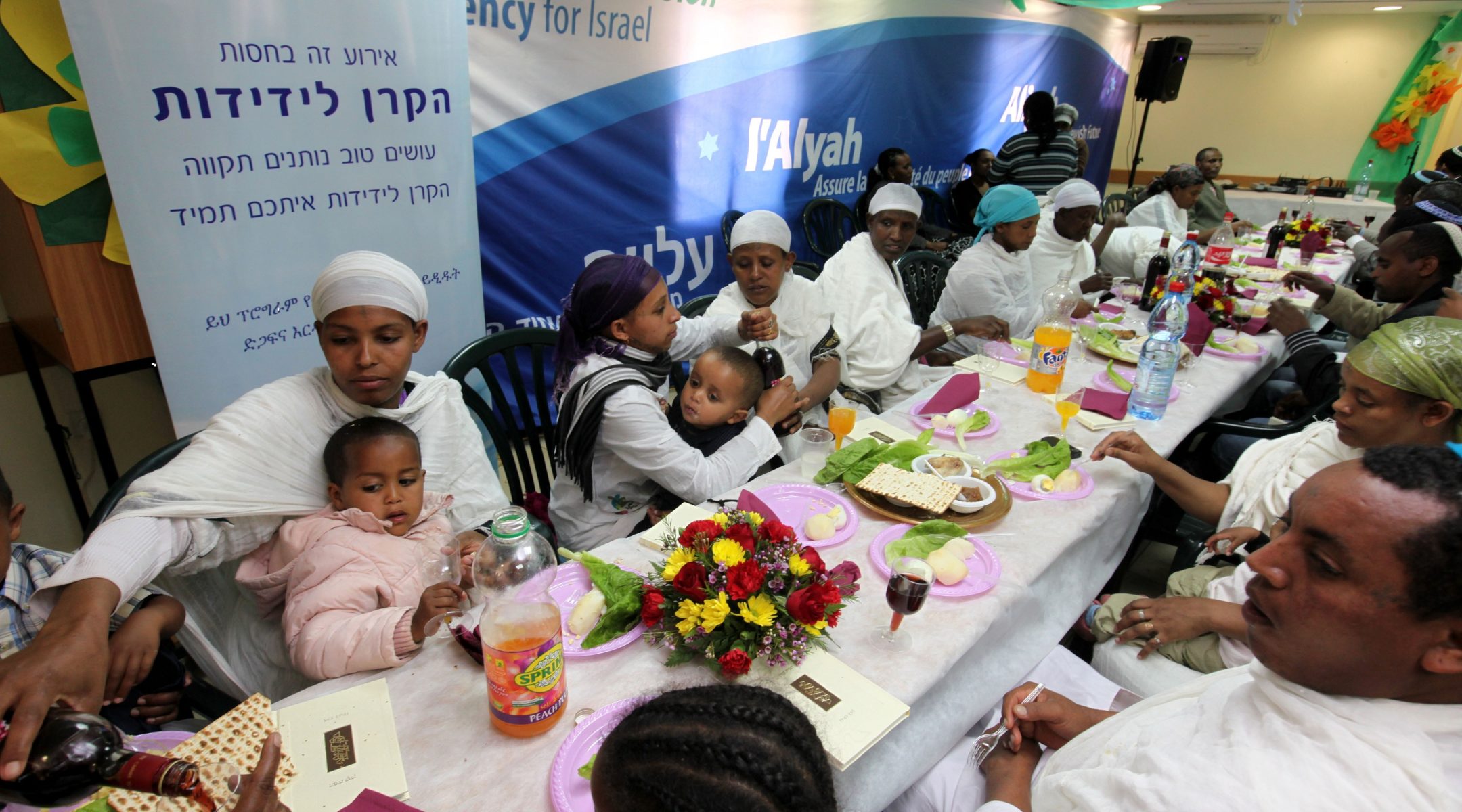 Located in Mevasseret Zion, a town just outside Jerusalem, the center has become more like a town within a town. Run by the Jewish Agency for Israel, it is meant to provide immigrants with basic language skills and cultural tools needed for their new lives in Israel.

Though the center is only meant to be a starting point for those lives – immigrants are encouraged to move out after two years – a growing number of the new arrivals are finding it economically impossible to leave given the high real estate costs in their new land.

“I want to move to Jerusalem or Rishon LeZion,” says a woman named Yeshalem who has lived in the absorption center since her arrival in Israel five years ago. “But I’m a single mother, I have four children and I just do not have enough money.”

Yeshalem says she receives about $750 per month in government benefits and has not been able to find work. In the meantime, she and her children live in a cramped two-room apartment. The mortgage package provided by the government is not sufficient for her to buy a place of her own, she said.

“Most of the families have been here for at least three or four years, some of them even longer,” says a young man named Berian who peddles bric-a-brac from a white van. “The government spends so much money on immigration, but the people here are so poor, we sometimes wonder where all that money goes.”

Supporters of Ethiopian aliyah worry that the Israeli government’s inability to adequately address the problems at the absorption centers not only will harm the integration of Ethiopian immigrants into Israeli society, but also could derail Ethiopian aliyah because there is no place to put the new arrivals.

Already the Israeli government has reduced the number of Ethiopian immigrants it allows in per month to 110, down from 200, and in recent months at least two absorption centers have been closed.

“Come December, there will be no more room here to absorb new immigrants and the whole aliyah process will come to an end,” warned Canadian parliamentarian Irwin Cotler, a longtime advocate for Falash Mura aliyah and now acting legal counsel for the Public Committee for Ethiopian Jews.

It’s just the latest hurdle for the immigration of the Falash Mura — Ethiopians who claim links to descendants of Ethiopian Jews who converted to Christianity generations ago and who are now returning to Jewish practice.

Their aliyah has been dogged by setbacks and controversy for at least a decade. Opponents question the Jewish credentials of the Ethiopians and view the immigrants as an economic and social burden to the state. Advocates of Ethiopian aliyah blame the government for dragging its feet on implementing decisions to bring the Ethiopians, exacerbating the problems for those living in poverty in Ethiopia and waiting to immigrate. More than 6,000 such people are left in Ethiopia, according to aliyah advocacy organizations, about 2,700 of whom have been approved by Israel to immigrate.

Last month, the Public Committee for Ethiopian Jews submitted a petition to Israel’s Supreme Court to ensure that Ethiopian immigration continues at the pace promised by the government. The petition argues that the government’s decrease in the monthly immigration quota contradicts an Israeli Cabinet decision last November to bring as many as 8,000 additional immigrants before ending mass Ethiopian aliyah.

Yehuda Sharf, the Jewish Agency’s director of aliyah, absorption and special operations, said the commitment was to bring 200 people per month during the first year of the current aliyah operation, and then to reduce the monthly number to 120 due to a lack of space. In fact, Sharf noted, more people than originally anticipated have arrived in 2011 because the government brought more Ethiopians than planned during the first half of the year.

“I truly believe that this entire aliyah will be wrapped up within the next two years,” he told JTA.

Avraham Neguise, executive director of South Wing to Zion, which lobbies the Israeli government on behalf of the Falash Mura, said those who have been approved for aliyah — the Ethiopians checked by Israeli officials who meet the criteria for Jewish links and for immigration under Israel’s Law of Entry — should be allowed to come immediately.

“The government should simply open more absorption centers to accommodate them,” Neguise said. “It is very sad that people who have already been approved have to wait so long before they can actually come.”

Neguise said he recently visited Gondar, where the Ethiopians awaiting aliyah are served by Jewish aid compounds originally opened by the North American Conference on Ethiopian Jewry but taken over by the Jewish Agency earlier this year. The compounds provide some schooling, food assistance and employment training. The American Jewish Joint Distribution Committee also operates a health clinic for the aliyah petitioners.

“The situation is not good at all,” Neguise said, arguing that the Ethiopians are living in dire poverty.

The solution to the problem is not that simple, said Elad Sonn, a spokesman from the Immigrant Absorption Ministry, which has been coordinating efforts between the ministries of housing and finance to find a solution to the housing problem.

Immigrant Absorption Minister Sofa Landver “is well aware of the situation,” Sonn said. “She visited Ethiopia last year and knows the problems the immigrants are facing. However, in order to absorb all these people effectively, it needs to be done carefully and in stages.”

For the moment, the plan is to offer Ethiopian immigrants at the Israeli absorption centers a chance to hold the mortgage allowance they get from the government in abeyance and instead take rental subsidies, Sharf said.

“This will mean that, come January, February and March, many people will be able to leave the absorption centers to make room for newer immigrants,” he said.

As for conditions on the ground in Gondar, the Jewish Agency’s representative in Ethiopia, Asher Seyum, acknowledges that they aren’t great but insists that people are getting as much help as possible in preparing for aliyah.

“Those who are learning Hebrew and Jewish studies in our newly opened center are getting a monthly stipend depending on their family size, and those who are not are working,” he said. “I believe that within two years, as long as another government does not come and change the previous decision, we will be able to end mass aliyah from Ethiopia.”