Even as some Israelis worry about the price, Shalit deal sparks joy 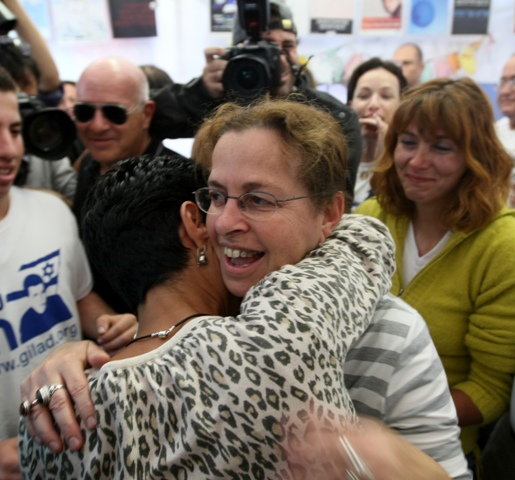 Aviva Shalit, the mother of abducted Israeli soldier Gilad Shalit, gets a congratulatory hug as she leaves a protest tent set up outside Prime Minister Netanyahu's residence in Jerusalem with the news that the Israeli Cabinet had approved a deal for the release of her son, Oct. 12, 2011. (Kobi Gideon/Flash 90)
Advertisement

JERUSALEM (JTA) – There was a festive mood among the shoppers running around Emek Refaim Street in Jerusalem’s German Colony doing their last-minute shopping Wednesday before Sukkot, but the mood was about more than just the coming holiday.

The news late Tuesday night that captive Israeli soldier Gilad Shalit would be released sparked elation in many corners of Israel.

“When I heard about it, I almost cried I was so happy,” said Sammy Hevroni, 52. “It makes me feel that if, God forbid, something happens to my son who is in a combat unit in the army right now, someone will go and bring him home.”

But, Hevroni added, he is concerned about the price: the release of more than 1,000 Palestinian security prisoners, many of them murderers, who could fuel a new round of terrorism in Israel. Still, he said, Israel had no choice when it came to the deal: It had to free Gilad.

Palestinians also welcomed the deal and the release of their prisoners.

“I think it’s one step in the direction of peace,” Mohammed Dajani, the founder of the relatively moderate Islamic organization Wataniya, told JTA. “The issue of the Palestinian prisoners and Gilad Shalit created so much tension on both sides. I am happy that Shalit is alive and will be coming home to his family, and I am happy for all of the families of the Palestinian prisoners, some of whom have been in jail for many years.”

Dajani said that the prevailing feeling on the Arab street before the deal was one of despair. He said the deal shows both sides that compromise can benefit everyone.

It is not clear why the deal was reached now, more than five years after Shalit was captured in a cross-border raid in June 2006. Israeli officials spoke of a “window of opportunity” that could be closing, and Prime Minister Benjamin Netanyahu thanked Egypt and Germany for their help in brokering the deal.

There was also a secret channel between Hamas Deputy Foreign Minister Ghazi Hamad and Gershon Baskin, the Israeli co-director of the dovish think tank IPCRI, the Israel Palestine Center for Research and Information. Baskin told Israel Radio that he and Hamad had exchanged lists of names of Hamas prisoners that Israel wanted included in the deal.

In an e-mail message to JTA, Baskin thanked Hamad, “who has been working with me for 5 years to secure the release of Gilad.” Baskin called Hamad “a person who I trust and who trusts me and someone who is the new face of Hamas willing to work for peace with Israelis.”

Some Israelis said the price — some of the released prisoners murdered Israeli soldiers and helped suicide bombers that killed dozens of civilians — was too high. National Infrastructure Minister Uzi Landau, one of three ministers who voted against the deal in the Israeli Cabinet, called the deal “a victory for terrorism.”

“From past experience, most prisoners who have been in jail for many years do not return to terrorism,” said Meir Elran, an intelligence expert at Tel Aviv University’s Institute for National Strategic Studies. “If Hamas wants to carry out suicide bombings, it has plenty of recruits who are younger and better trained.”

Of the 479 Palestinian prisoners who will be released in the first stage, more than 200 will not be allowed to return to their homes in the West Bank. Most will be deported to the Gaza Strip, which is controlled by Hamas.

The issue of Palestinian prisoners is a top priority for Palestinians, and the deal is expected to strengthen Hamas in Gaza. Hamas had been losing ground to the rival Fatah faction, which controls the West Bank and whose leader, Palestinian Authority President Mahmoud Abbas, was cheered as a hero for petitioning the United Nations last month for Palestinian statehood recognition. This deal is seen as a victory for Hamas in the rivalry between the two factions.

The deal also may boost Netanyahu, at least in the short run. There is some hope in Israel that the agreement to free Shalit somehow could spark renewed Israeli-Palestinian negotiations, creating an incentive for the Palestinian Authority to regain the momentum from Hamas by returning to the negotiating table. But many analysts are doubtful that either side is willing to make the necessary concessions on issues such as borders and the future of Jerusalem.

Over the past five years, Gilad Shalit had become a household name in Israel. In thinking about Shalit and the efficacy of such a prisoner exchange, parents in this country of mandatory army conscription invariably ask how they would feel if it were their son being held captive. Shalit’s parents, soft spoken but tenacious, have been tireless advocates for their son’s release.

Now, with Shalit set to be released, many wonder about his physical and mental state. In five years and four months of captivity, Shalit was allowed no international visitors. Two years ago, his captors released a brief video of Shalit issuing a call to Israeli leaders to agree to a deal for his release.

“The video showed he is functioning and speaking, but who knows what has happened to this young man,” Reuven Gal, the former IDF chief psychologist, told Israel Radio. “Gilad was presumably held in physical and emotional isolation, and the result is likely to be serious trauma.”

Gal said the best chance for full recovery is for Shalit to spend as much time with his family as possible.

Despite the seemingly high price for Shalit’s release, Rabbi Ron Kronish, director of the Interreligious Coordinating Council of Israel, said the deal made him happy.

“There is a strong consensus in favor of the deal in Israel,” Kronish said. “I think it says something about the value of human life. I even like the timing — the eve of the holiday of Sukkot, when it is a mitzvah to be happy.”