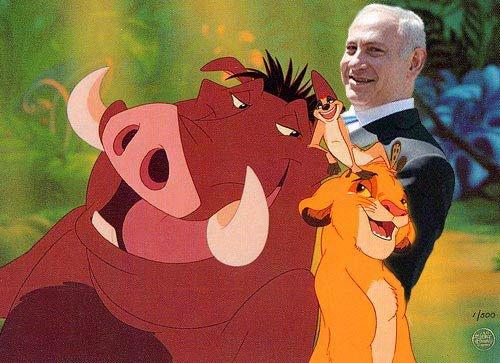 Bibi in hanging out with Timon, Pumba and Simba (knowyourmeme.com)

In a move that some would say was unpredictable and quite ballsy, Netanyahu decided to make a deal with Hamas and release Gilad Shalit, the abducted soldier who was a captive for over 5 years. When it was time for the Shalit family to reunite, Bibi photobombed the most dramatic father-son hugging moment, creating one of the fastest spreading memes around.

The Bibi-bombing meme jumped to the top of knowyourmeme.com, the primary source of, well, knowing your meme. Since we are witnessing Bibi’s 15 minutes of fame, pay your respect by photoshopping him into your favorite photos!