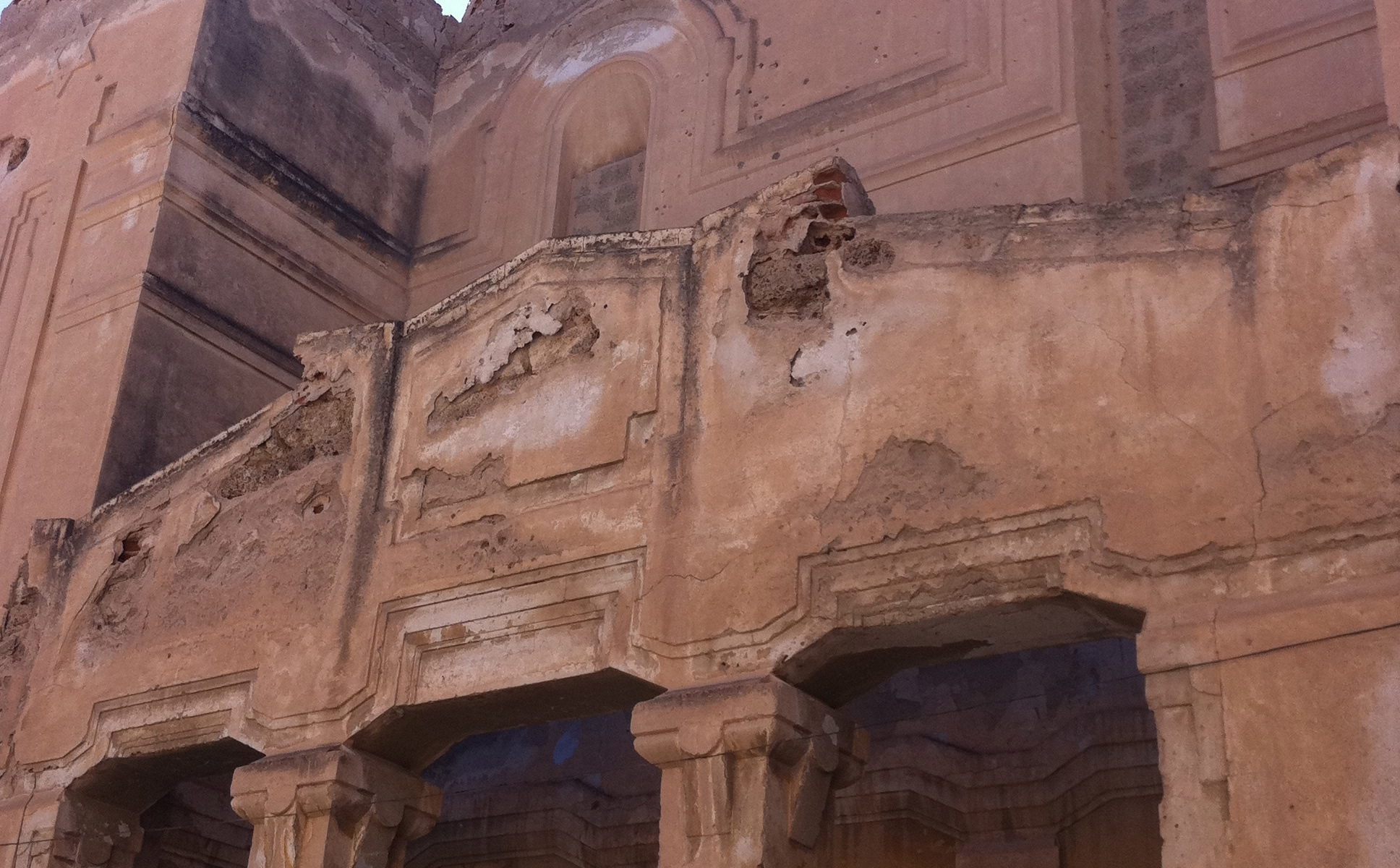 In this undated photo David Gerbi poses in front of Sla dar Bishi, the synagogue in Tripoli that he hopes to renovate. Gerbi, an Italian Jew born in Libya, played a central role in 2002 in the rapprochement between Moammar Gadhafi and Libyan Jews. (Courtesy David Gerbi)
Advertisement

WASHINGTON (JTA) – Now it can be told: For the last decade or so, the Jews had secret back channels to Moammar Gadhafi.

What led the pro-Israel community into a careful relationship with Gadhafi 10 years ago were considerations of U.S. national interests, Israel’s security needs and the claims of Libyan Jews.

After his overthrow by Libyan rebels and his killing last week, the conclusion among many pro-Israel figures in America is that it was worth it, despite the Libyan strongman’s erratic behavior and his ignoble downfall.

The reason: Gadhafi’s shift away from state terrorism after the Sept. 11, 2001 attacks eliminated a funder and organizer of threats to Israeli and U.S. interests.

Gadhafi’s overtures to the pro-Israel community began in 2002, when a leader of the Libyan Jewish community in exile, David Gerbi, returned to Libya to bring an elderly aunt to Italy, where he and his family now live. His aunt, Rina Debach, is believed to be the last Jew to have lived in Libya.

Through interlocutors, Gerbi told JTA, “Gadhafi asked me if I could help to normalize the relationship between Libya and the United States.”

Gadhafi’s motives were clear, according to Gerbi: Saddam Hussein was in the U.S. sights at the time and Gadhafi, who already was tentatively reaching out to the West through Britain, did not want to be next on the list.

“He saw what’s next, he was on the list of terrorist countries,” Gerbi said.

Gadhafi agreed to end his nascent weapons of mass destruction programs and to a payout in the billions of dollars  to families of victims of the terrorist attack that brought down a Pan Am flight over Lockerbie, Scotland, in 1988.

Gerbi, who still hopes to re-establish a Jewish presence in Libya, immediately launched a tour of the United States in hopes of rallying support for bringing Libya into the pro-Western fold. He met with pro-Israel groups and lawmakers.

“There were extensive discussions about what would be appropriate and not appropriate,” recalled Malcolm Hoenlein, the executive vice president of the Conference of Presidents of Major American Jewish Organizations, the Jewish community’s foreign policy umbrella group. In the end, “we didn’t want to stand in the way of Libyan Jews having the opportunity to visit.”

Especially notable was the fervor with which the late U.S. Rep. Tom Lantos (D-Calif.), a Holocaust survivor who then was the senior Democrat on the House of Representatives Foreign Affairs Committee, embraced the cause. Lantos, with the blessing of a George W. Bush administration seeking to contain radical Islamist influence, visited Libya five times.

“I am rational enough to recognize that we must accept ‘yes’ for an answer,” Lantos told the Forward newspaper in 2004 following his first visit. “Gadhafi’s record speaks for itself — it’s an abominable record — but the current actions also speak for themselves. He has now made a 180-degree turn.”

Lantos, associates said, delighted in showing visitors a gift he had received from Gadhafi: a copy of his book “Isratine,” his idiosyncratic proposal for a single Israeli-Palestinian state.

Steve Rosen, now a consultant to a number of groups on Middle East issues, was at the time the director of foreign policy for the American Israel Public Affairs Committee. He said the pro-Israel community decided to not to stand in the way of U.S. rapprochement with Libya because of the relief it would offer Israel.

Rosen and Alan Makovsky, a staffer for Lantos, were surprised when around 2002 — the same time that Gerbi was making the case for Libya in New York and Washington — Gadhafi’s son, Seif al-Islam, sought them out at a conference on the Middle East in England.

“He kept finding ways to bring us into the dialogue,” Rosen recalled. “It became plain we were the reasons for his coming to the conference. He considered us influential in Washington because we were pro-Israel.”

Rosen took the younger Gadhafi’s case to the Israelis, who gave AIPAC a green light not to oppose Libya’s overtures — but they also counseled caution.

“Most of them raised an eyebrow, saying you can’t trust Gadhafi, but the idea of a rogue state becoming moderate appealed to them,” Rosen said.

That view seemingly was vindicated when Libya destroyed its weapons of mass destruction under U.S. supervision.

AIPAC would not comment on the affair. Keith Weissman, Rosen’s deputy at the time, confirmed the account, recalling his own trip to England, at Seif el-Islam Gadhafi’s invitation, in 2003.

“The Israelis liked it because there was one less guy with a lot of money to spend on bad things,” Weissman said.

“They were very nice, we drank wine and stuff,” he said of the Libyans. “They were mostly interested in that we wouldn’t screw up the normalization process.”

Most Jewish groups chose not to respond to invitations to visit Libya, noting that while Gadhafi had removed himself as a threat to others, he was still dangerous to his own people.

“Nobody was fooled, everybody knew what Gadhafi was,” said Hoenlein, who like Rosen had turned down invitations to visit Libya.

Yet a few of Libya’s new Jewish-American interlocutors didn’t stop at merely not standing in the way of normalization; they seemed to embrace the Gadhafi regime. Lantos became a strong advocate for normalization, setting up a U.S.-Libya student exchange.

“I am very proud of America’s success in convincing Gadhafi to become a decent citizen of the global community,” Lantos said at a hearing of the Foreign Affairs Committee in 2007, when he was chairman. “Our relations with Libya today are in a much better place than they were just five years ago. Our engagement with Gadhafi and the prosperity it has brought Libya serves as a model to countries currently sponsoring terror or compiling weapons of mass destruction. They should know that they, too, can come in from the cold.”

Jack Rosen, then the chairman of the American Jewish Congress, met in 2007 with Gadhafi and counseled greater outreach.

“He represents a model of a leader who chose to take a risk in talking to the West, and we need to reinforce the path he chose,” Rosen told the Forward.

Rosen this week told JTA that Gadhafi’s wariness of Iran made him valuable at the time. “He worked hard at trying to find ways to weaken Iran,” said Rosen, recollecting his conversations with the Libyan leader. “Being an enemy of Iran and of its interests was a benefit — and he was marginalized in his ability to damage Israel in any way.”

Such hopes were soon dashed by Gadhafi. He grew closer with the anti-American president of Venezuela, Hugo Chavez, dabbling in the internal affairs of other African countries. In 2009 he delivered a long, bizarre rant at the U.N. General Assembly. He pursued a weird one-sided courtship with Condoleezza Rice, Bush’s secretary of state, which she once said gave her the chills.

His promises of restitution to Libya’s Jewish exiles — driven out two years before Gadhafi took power in 1969 — came to naught.

Gerbi, a psychologist invited to Libya in 2007 to assist in Libyan hospitals, suddenly was thrown out of the country, and the items and money he had brought to refurbish synagogues was confiscated.

Much hope now rests on the provisional government that has replaced Gadhafi. Gerbi advocates caution. At the revolutionaries’ invitation, since May he has spent weeks on and off in Libya assisting its people overcome post-traumatic stress.

Yet at Rosh Hashanah, when Gerbi attempted to reopen a shuttered, neglected synagogue in Tripoli, he was met with a virulently anti-Semitic Facebook-organized campaign. Protesters outside the synagogue held up signs proclaiming what Gadhafi had once promised: no Jews in Libya.

The incident prompted 16 Democrats in the U.S. House of Representatives, including 10 top Jewish members, to write to U.S. Secretary of State Hillary Clinton urging her to use her influence to preserve Jewish sites in Libya.

“They are tangible evidence of a once open and tolerant chapter in its past and can serve as a visible symbol of a more hopeful future,” said the letter, which was spearheaded by Rep. Shelley Berkley (D-Nev.).

Gerbi left at the transitional government’s behest but says he will go back, albeit with a more skeptical eye.

“After the international community recognized Gadhafi, he stopped being afraid — and he became inflated,” Gerbi said. “It’s the same pattern” with the rebels, he told JTA. “Gadhafi instilled a lot of hatred. The situation has to evolve.”