Harry Houdini speaks from the grave 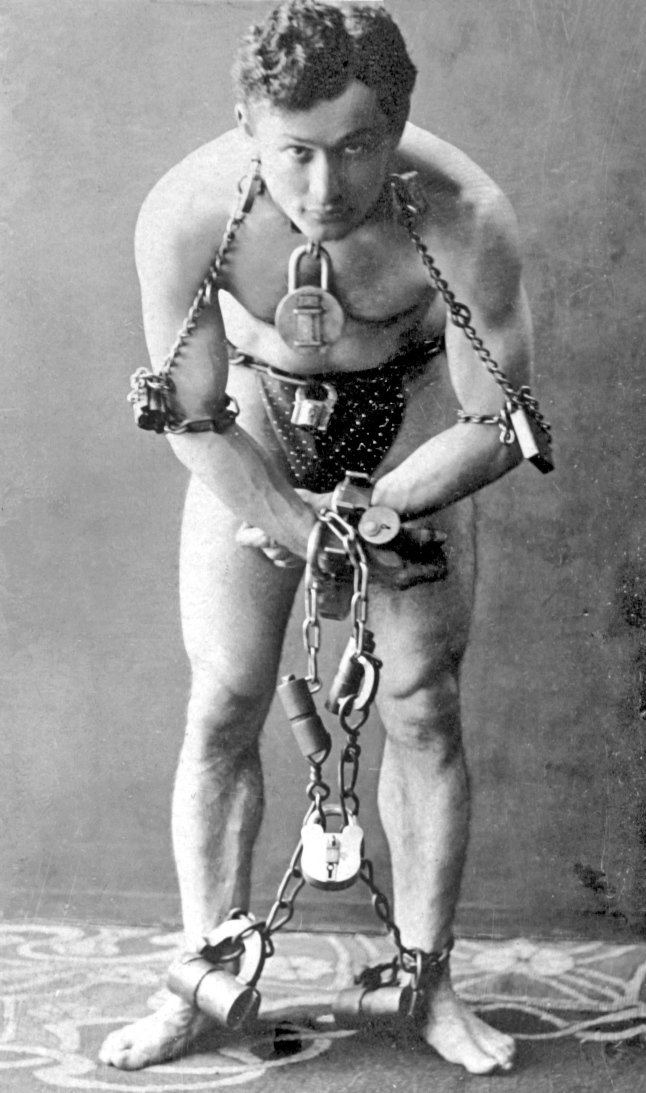 Oct. 31, 1926 signalled the final escape act of magician Harry Houdini. While the JTA Archive doesn’t reveal very much about his life, our Jewish Daily Bulletin laid out his last will and testament in great detail. Full text after the jump:

Harry Houdini, world famous as a magician, and an exposer of spiritualistic frauds, died in Detroit on Sunday.

Houdini was born on April 6, 1874. His name originally was Eric Weiss and he was the son of a rabbi, Rev. Mayer Samuel Weiss. He did not take the name Harry Houdini until he had been a performer for many years.

During the last few years Houdini had become internationally known as a tireless enemy and exposer of fraudulent mediums and all false claims in the field of spiritualism. He was a member of the Scientific American committee that investigated Margery. the Boston medium. He was the author of "Spooks and Spiritualism." "The Unmasking of Robert Houdin," "Handcuff Secrets," and "Rope Ties and Escapes." His library, chiefly devoted to works on the theatre, to magic and the black arts which has been valued at $500,000, has been willed to the National Museum at Washington.

The passing of Houdini, the son of a rabbi, who amazed the public and baffled scientists by his apparently inexplicable feats of magic and who exposed numerous fraudulent "mediums" and swindlers in the course of his romantic and extraordinary career, is regretted by the press.

The New York "Evening World" praises Houdini for using his unique gifts for the enlightenment of the human mind. Says the paper:

"He might have outdistance in many ways the daring and wonderful impositions of the greatest charlatan of the pre-Revolutionary era in France, the Italian adventurer, the Dr. Balsamo of one of Dumas’s historical romances.

"But he chose to use his peculiar powers to enlighten the human mind and not further darken it in superstition. He asserted for the most apparently inexplicable tricks and supernatural performances a natural or scientific explanation and would prove it by duplicating any of them himself.

"And Harry Houdini did not originate in the Orient, the home of the occult. He was just a plain American born boy whose father was a clergyman in the West."

The "World" thinks Houdini’s achievements earned for him the title of scientist, and adds:

"Mediums who had baffled Harvard professors went crashing down to ruin through his demonstrations; apparently there was not one bit of occult hokum with which he was not familiar and which he could not reproduce to the delight of audiences who watched. A man who devotes himself to such a pursuit does a real public service. He will be missed, and all the more because of the puckish delight he took in the service he rendered."

Nov. 4 (JTA) — Harry Houdini was buried yesterday in Machpelah Beth Olom cemetery near his mothers’s grave in accordance with his will. Two years ago Houdini submitted a closed letter to the secretary of the Elks’ Club, of which he was a member, with instructions that the letter be opened after his death. The letter contained the following instructions: "Rabbi Tintner of Mount Zion Temple performed my marriage ceremony. His father, Rabbi Moshe Tintner buried my mother. The latter was an old friend of my father, Rabbi Weiss. Therefore, I desire that Rabbi Tintner perform the last rites over my body. He linked me with the wife whom I have never stopped loving." Houdini then expressed the wish to be buried near his mother in the Beth Olom cemetery, Brooklyn. The funeral was from the Elks Club, Rabbi Tintner and Rabbi Drachman officiated. Loney Haskel eulogized the late magician in the name of the Jewish Theatrical Guild of which Houdini was one of the first members.

The will of Harry Houdini disposing of his estate and his library valued at $500,000 was filed at the Surrogates’ Court.

The library is divided among the Congressional Library at Washington, the American Society for Psychical Research and Mrs. Houdini.

The will, which was executed July 30, 1924, closed with the words "formerly Erich Weiss"–which was Houdini’s original name–after his signature. The will provided for the payment of his debts and funeral expenses and directs that the Machpelah Cemetery Association, Fresh Pond Road, Queens, receive $1,000 for the perpetual care of the lots where he is buried beside his mother. No other member of the family is to be interred there, the will stipulates. A bronze bust of himself, made by Cassidy of Manchester, England, is to be placed at his grave on an exedra erected by the magician.

Houdini provided that his brother, Theodore Weiss Hardeen, was to receive his portion of the estate’s income only on condition that Hardeen’s sons all are confirmed in either the Jewish, Orthodox or the Reform faith within three months of the date of Houdini’s death. Mrs. Houdini was given power to determine whether this condition is fulfilled.