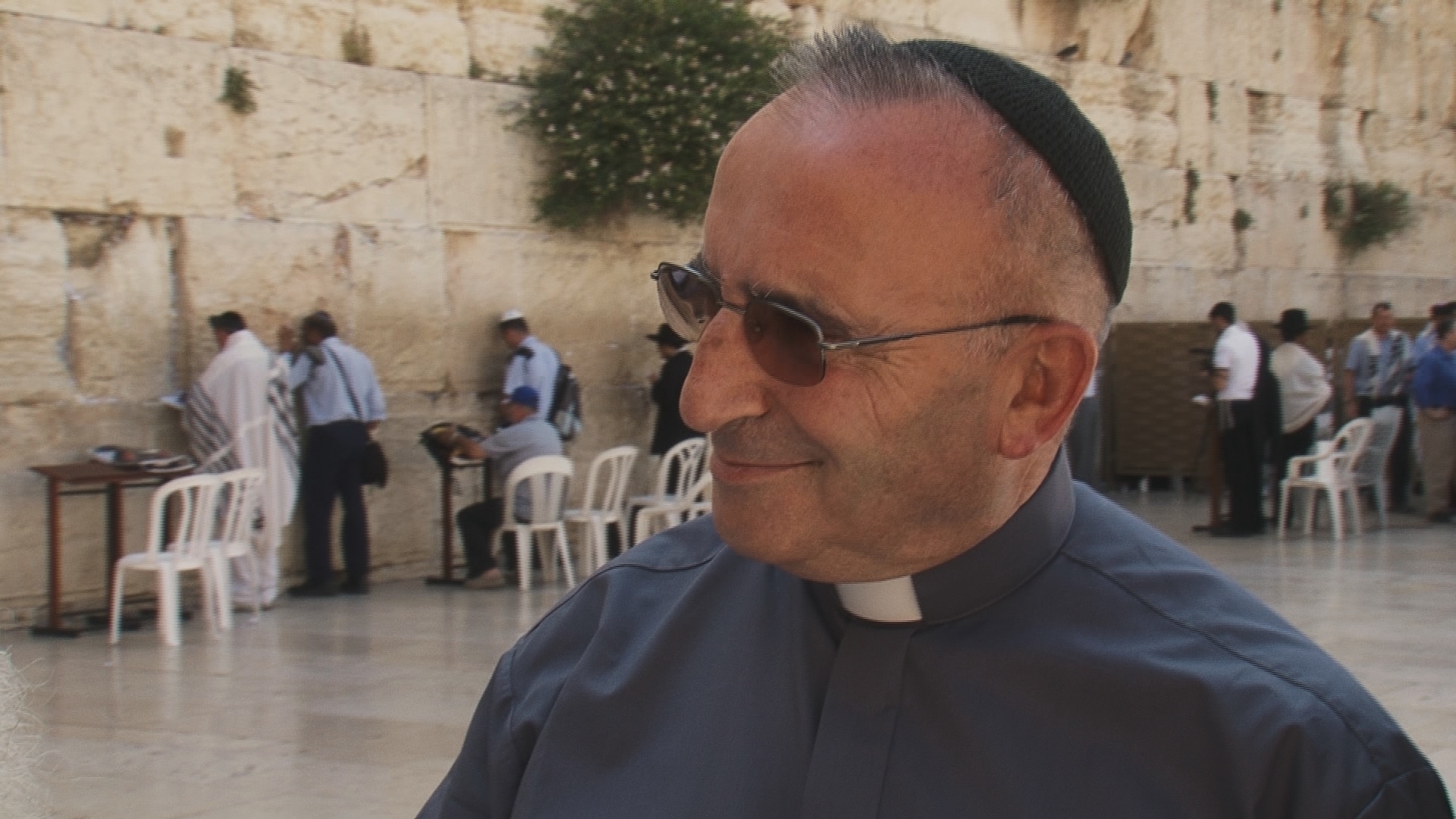 Polish Jewish priest Romuald Jakub Weksler-Waszkinel is shown in a scene from "Torn" in front of the Western Wall. (Courtesy of Other Israel Film Festival)
Advertisement

In a scene from “77 Steps,” Ibtisam Mara’ana and Yonatan Ben-Dor in the Tel Aviv neighborhood where they met.

(Courtesy of Other Israel Film Festival)

NEW YORK (JTA) — The premise of “Torn,” a documentary premiering in the U.S. this week at The Other Israel Film Festival in New York, sounds a bit like the classic rabbi and priest walk into a bar joke. Except that unlike the joke, the Jew and the Christian in the film are one and the same — Romuald Jakub Weksler-Waszkninel.

Jakub, as he is called throughout the film, was born a Jew during the Holocaust in Poland. His birth mother, who perished along with Jakub’s father and brother, left him in the care of a Polish Catholic couple who raised him ignorant of his Jewish background. At 23, Jakub was ordained as a Catholic priest.

If the story ended there, it would merely be an interesting footnote in the tragic history of the Holocaust. But when Jakub was 35, his adoptive mother, believing that she did not have much time left to live, told her son about his Jewish origins. That led to years of exploration and soul searching, culminating with Jakub’s decision, at 67, to move to Israel.

“Torn,” by Ronit Kertsner, tells the story of Jakub’s attempt to gain recognition as a Jew under Israel’s Law of Return. Despite being a victim of the Holocaust, the state won’t let him enter as a Jew since he refuses to renounce his Christianity.

Like most of the films at the Other Israel Film Festival, now in its fifth year, “Torn” gives voice to the marginalized and excluded, to the communities who can’t assimilate into the Jewish mainstream due to intolerance or legal obstacles. The festival was founded in 2007 by Carol Zabar to showcase the stories of minorities in Israel, especially its Arab citizens, though other groups have been included as well, including migrant workers, Ethiopian immigrants and Christians such as Jakub.

Jakub’s path to residency, if not citizenship, takes him to a religious kibbutz where he wishes to study Judaism and Hebrew. When he meets with the admission committee of Kibbutz Sde Eliyahu, he asks to be given leave to go to Tiberias on Sundays to pray at a Franciscan monastery. They politely tell him that this is an impossibility.

“Who are you, Yaacov?” a Sde Eliyahu representative asks in Hebrew. “Are you Jewish? Christian?”

Both, he might have answered had his Hebrew been up to snuff. Not that this would have been an acceptable answer to the government, which allowed him to remain in the country on a visa granted to monks but will not give him the Jewish recognition he craves.

The cruel irony in all of this, Kertsner observes, is that the state does acknowledge his Jewishness in some capacity. His parents were posthumously honored as Righteous Gentiles for rescuing a Jewish child. For the purposes of honoring them, the government considers him Jewish, but when it comes to immigration, he is not.

“His sister could move to Israel as the child of Righteous Gentiles,” Kertsner told JTA by phone, referring to his Polish sibling who is not mentioned in the film. “If he is a Jew, he is not their son and therefore he can’t [move to Israel as a child of Righteous Gentiles]. But if he is a Jew, then why can’t he become a citizen?”

Jakub perceives the indignity in his situation and  chokes up at times when discussing his treatment by the government, insisting “I am a Jew.” Yet despite his tenuous immigration status, “I want to be in Israel,” he affirms.

A similar impulse underlies the predicament of Ibtisam Mara’ana, 36, at the start of her new documentary, “77 Steps,” which chronicles her relationship with a Jewish man, Yonatan Ben-Dor.

“I want to belong to this place,” she says in the film.

“This place” is Tel Aviv, a city both culturally and geographically distant from Fureidis, the fishing village in northern Israel in which which Mara’ana, an Arab Israeli, was raised.

Mara’ana explored the history of Fureidis (Arabic for “paradise”) in her first film, “Paradise Lost.” Her mother, who still lives in their village, appears in “77 Steps” only as a voice on the other end of a phone call, urging her to return and resume a traditional lifestyle that includes a husband and children. She has not watched most of Mara’ana’s films because she does not approve of her daughter’s vocation.

In this refusal, Mara’ana’s mother is joined by many in Israeli Arab society. Though feminism is not among the dominant themes in “77 Steps,” it is apparent in the very act of filming her premarital relationship with Ben-Dor, which Mara’ana said is a revolutionary act for an Arab woman. In fact, a screening of the documentary in an Arab town was halted due to the perceived impropriety of the subject matter.

For this reason, Mara’ana felt compelled to leave Fureidis and move to Tel Aviv, where she would have more creative freedom.

“As a woman, as a liberal, as a progressive, as an artist, as a director — I want to belong to this big city,” she told JTA. “When I came to Tel Aviv, I had a lot of questions about my Israeli identity, about my Palestinian identity, about my female identity.”

Though she felt free enough to explore these competing identities in Tel Aviv, she acknowledges that “it’s still a city where if you are a minority — Arab, not Jewish — it’s still not really a place that’s happy to hug you.”

Indeed, the film begins with Mara’ana trying to rent an apartment in Tel Aviv. She is rejected by a broker who had been willing to show her a flat until she revealed her Arabic first name. Eventually she finds an apartment and meets her neighbor, Ben-Dor, a Canadian expat also trying to adapt to his new surroundings.

“We met as strangers,” she said.

Ben-Dor was trying to find his place in his new homeland and she was trying to gain acceptance and respect for both sides of her — her Israeli citizenship and the Palestinian roots — in the country of her birth. Like Jakub, she discovers that insisting on seemingly competing identities alienates her from the mainstream. This was especially obvious toward the end of the film when Ben-Dor and Mara’ana’s breakup seems imminent.

“I understand the limits of our relationship,” Ben-Dor tells her, referring to her inability to celebrate Independence Day with him because for her it is the Nakba, or catastrophe, as Palestinians refer to Israel’s creation. But because he can easily identify with Israel and celebrate Yom Ha’atzmaut, Ben-Dor, who had only been in the country for six years, will have an easier finding his place in Israel than many Israeli Arabs.

Unlike Jakub and Mara’ana, he only has to check one identity box. Yet despite the breakup, Mara’ana ends “77 Steps” on a note of quiet uplift.

“As a woman, you have your own space to create, to live, to make love, to hate, to be what you want to be,” she said, invoking Virginia Woolf. “For now it’s my apartment in Tel Aviv and I’m happy for that.”