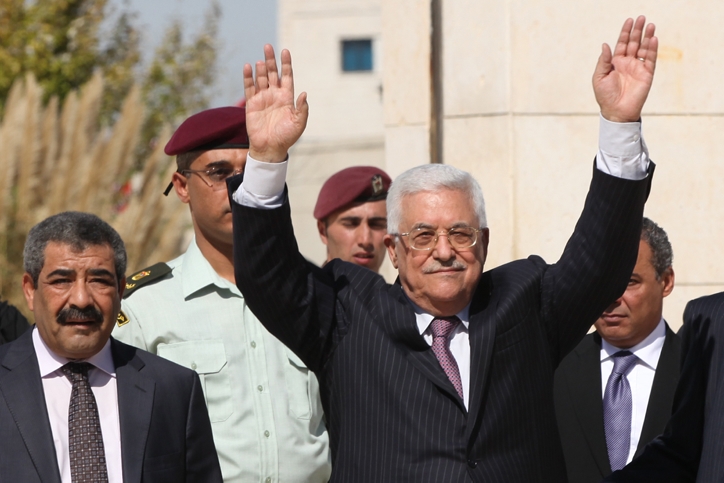 JERUSALEM (JTA) — Palestinian Authority President Mahmoud Abbas’ statehood push at the United Nations may be fizzling, but his supporters insist that he can find a way out of the impasse.

“Abu Mazen is a powerful leader and is very persuasive,” said Ahmad Tibi, an Arab member of Israel’s Knesset, using Abbas’ nom de guerre. “He has managed to convince the majority of the Palestinian people that the way to reach statehood is through nonviolent means.

“The problem is that Abu Mazen does not see this Israeli government as a partner to peace. He believes they are anti-peace.”

Some in the Israeli government have no great love for the Palestinian leader either, particularly since he took the Palestinians’ case to the United Nations. Israel’s Foreign Minister Avigdor Lieberman said last month that Abbas is the main impediment to peace.

“If there is one obstacle that should be removed immediately, it is [Abbas],” he told reporters. “If he were to return the keys and resign, it would not be a threat but a blessing.”

Israeli President Shimon Peres, however, responded the next day that Abbas and Palestinian Authority Prime Minister Salam Fayyad “are serious leaders that want peace and are working to prevent violence and extremism in our region.”

Abbas now faces a daunting set of challenges, including strained relations with Israel and the United States, which are angry over the U.N. bid., and a Hamas movement waiting in the wings to seize on his stumbles. Abbas has insisted that he will not resume negotiations with Israel in the absence of a settlement freeze, so the way forward remains uncertain.

“The Palestinian leadership is now in the process of discussing the future and where it wants to go, what options there are on the table and the current status quo with Israel,” said Tibi, who was a special guest of Abbas during his September trip to New York for the opening of the U.N. General Assembly.

With the peace process in a stalemate, Tibi said, “It is possible we could see some dramatic developments [from Abbas] in the near future.”

Since Abbas’ Sept. 23 address at the U.N. General Assembly, when the PA leader told the world that it was time for a “Palestinian Spring” and to see an end to “63 years of suffering,” the Palestinians have faced serious setbacks. It is becoming increasingly clear that the Palestinians will not be able to line up the hoped-for nine Security Council member states — the number needed to give a green light for U.N. membership, though the U.S. has vowed a veto in any case.

In addition, Abbas’ Fatah party took a hit last month as a result of the prisoner swap that won captive Israeli soldier Gilad Shalit his freedom. Its rival, Hamas, managed to negotiate the release of 1,027 Palestinian security prisoners from Israel. On the day of the prisoner exchange, there were reports describing green Hamas flags flying high over the West Bank.

In response to recent developments, and with statehood looking increasingly unlikely in the near future, Abbas has threatened to disband the Palestinian Authority.

“Of course Abbas is continuing on with his U.N. bid, but if it fails, he could decide to return the keys to Bibi and go back to occupation,” said Tibi, referring to Israeli Prime Minister Benjamin Netanyahu by his nickname.

Tibi added, however, that Abbas also might decide to call for Palestinian elections in the near future. The latter path has been hinted at in recent months, with senior Abbas aide Nabil Abu Rudeineh suggesting that elections could happen as soon as January.

Hillel Frisch, a senior research associate at the Begin-Sadat Center for Strategic Studies at Bar-Ilan University, said he believes that the threat to dismantle the P.A. is little more than a scare tactic.

“I doubt that someone would really dismantle an authority that commands some $3.1 billion directly or indirectly,” he said. “It would be very difficult because there has been so much invested in the P.A. I think these are merely threats to put pressure on the U.S., to put pressure on Israel to dismantle the settlements.”

Frisch said that Abbas faces challenges to his authority both from Hamas and from younger Fatah activists.

“He is scared of factions within his own people, which could become a threat,” Frisch said.

“He is not a strong leader, and as the situation deteriorates, there needs to be a strong person in charge,” he said, adding that former Palestinian Authority President Yasser Arafat “was a strong leader, but he did not have willingness. Abbas has a willingness but not the strength.”

Isaac Herzog, a member of the Knesset’s Foreign Affairs and Defense Committee representing the Labor Party, sees the situation a bit differently.

“Abbas has been successful in uniting the Palestinian people and he has the overwhelming support in the West Bank,” he said.

Herzog said that Israel erred in not being more receptive to Abbas’ statehood push.

“We should have run with it because at the end of the day, him and Fayyad are the best partners we can get,” he said. “I’m not saying Abbas is irreplaceable, but he is committed to preserving security and stopping terror, and he has achieved major success in building a political system that works.”