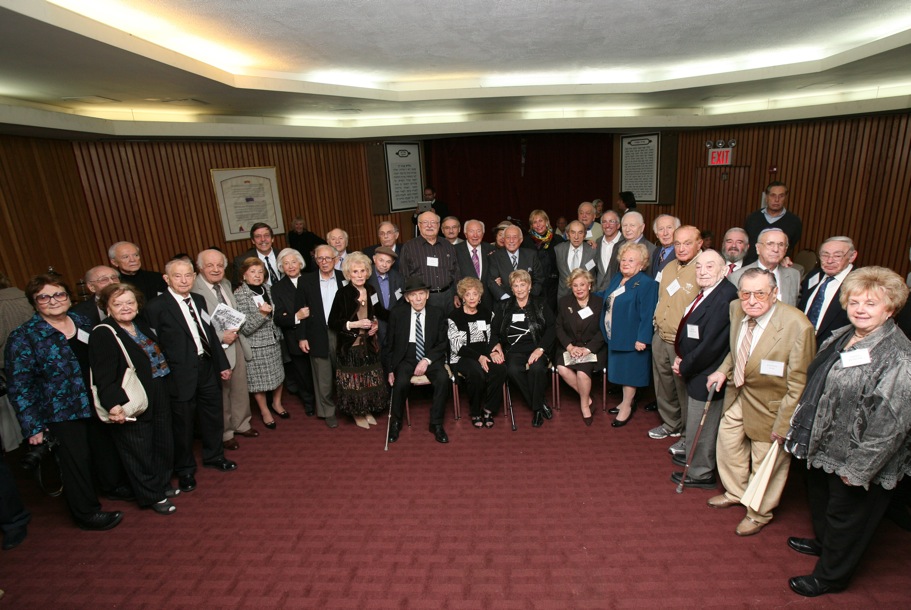 Their embrace at a synagogue on Manhattan’s Upper East Side was 65 years in the making.

Small and Bakst grew up a few houses apart in Ivye, Belarus, attending the same school and synagogue before reality turned black, back when their names were Avraham Schmulewitz and Leibel Bakst, and Ivye belonged to Poland and the Nazis had not yet invaded. They last saw each another in 1946 at a displaced persons camp in Munich.

During the two years preceding their liberation by the Red Army in 1944, the then teenagers fought the Nazis in separate brigades in the vast Nalibotskaya Pushcha forest. For their daring, Small, now living in Palm Beach Gardens, Fla., and Bakst, of Dallas, along with 53 other Jewish partisans from across the United States, were honored here at a synagogue reception Nov. 6 and a gala dinner the next evening.

Like many partisans interviewed, Bakst downplayed his role, saying that sheer survival was the great motivator. Some had carried rifles, sabotaged German supply trains and attacked the enemy. Others served as scouts, guides and cooks. Bakst and his older brother, Yehoshua, were deployed to secure bread, butter, cheese, potatoes and meat from neighboring farmers; anything not given was taken. The boys were intimately familiar with the region from traversing the woods every year to visit their grandmother, Bakst explained.

“Even if we saved a few lives and shortened the war, we made a contribution,” he said.

The nearly 350 relatives, friends and admirers who gathered in a converted theater for the dinner were lauding the 55 partisans and their absent or deceased comrades for being “ordinary men and women taking extraordinary measures to protect Jewish lives,” said local newscaster Dana Tyler, the dinner’s mistress of ceremonies.

The event marked a high point for the San Francisco-based Jewish Partisan Educational Foundation, the sponsoring organization whose executive director, Mitch Braff, admitted knowing nothing about partisans until meeting a fighter from Lithuania and founding JPEF 11 years ago.

The Nov. 7 dinner combined strong elements of reunion, tribute, historical preservation and education. Both the partisans and JPEF’s U.S.-born officials emphasized the importance of adjusting World War II’s record to account for Jewish heroism amid the Shoah’s slaughter.

“Tonight we honor your bravery and your courage,” said television actor Edward Asner, representing his cousin Abe, a 95-year-old partisan from Eishyshok, Belarus, who lives in Windsor, Ontario. “Thank you for putting the lie to the (claim) that Jews didn’t fight back. For inspiring all of us to stand up against tyranny, I salute you and I applaud you. We all applaud you.”

Attendees ignored Asner’s request to stifle clapping while portraits of each partisan appeared on-screen. When the lights returned, Asner uttered somberly, “The list is too short. I’m sorry that there aren’t more with us.”

With central roles assigned to partisans’ descendants — Matthew Bielski, grandson of the late Zus Bielski, leader of the eponymous brigade featured in the 2008 film “Defiance,” recited the HaMotzi prayer, and Shira Ginsburg, a Manhattan cantor whose paternal grandparents were partisans, sang “Hymn of the Partisans” in the original Yiddish — the dinner underscored a central theme of transmitting the resistance’s history to subsequent generations.

Some 5,000 American educators utilize JPEF-developed curricula and programs in their classes, said Braff, who reported being pleasantly surprised at a 2010 conference for social studies teachers at which 450 teachers signed up with JPEF. Board president Elliott Felson said that JPEF over the next decade hopes to reach 100,000 educators and 2 million students with the lessons of the partisans’ heroism.

Family members of honorees concurred in being thrilled to witness the evening’s tribute to their loved ones.

Helene Gradow Kingston, who accompanied her 86-year-old father, Jeff Gradow, a Los Angeles resident, said the event “makes me very proud.” Gazing at her son Elliott, 17, she added of her father, “He was [a partisan] at my son’s age. These were amazing feats of courage.”

Paula Berger, 77, of Denver, as a young girl from Novogrudek, Belarus, was sheltered in the Bielski brigade.

“If there’s anything any of us ever wanted, it’s that someone would tell our story because we didn’t think we’d survive. It was such a horrific time,” said Berger, whose two daughters, son and granddaughter accompanied her to the dinner.

“The people who are putting in the time and money to keep the story alive and retold — I think it’s wonderful. It’s another Chanukah ‘nes’ [miracle] or Purim nes because Purim was about saving Jews’ lives and Chanukah was about saving our spirit,” she said. “This was both.”