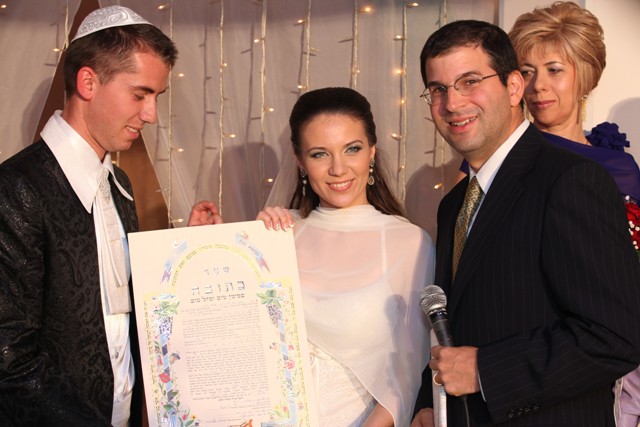 JERUSALEM (JTA) — Anna Melman and Ari Bronstein are in the midst of planning their wedding, which will be held in January in Israel. They have a venue and a rabbi. But they want to find ways of making the traditional ceremony more egalitarian.

“In the wedding ceremony as it is now, the bride is inherently passive,” Melman told JTA. “We wanted to do something where it would be more egalitarian within the confines of a nonegalitarian ritual. I wanted to have more of a voice.”

They plan to modify the ceremony while staying within the confines of halachah, or Jewish law — something essential in a country where all Jewish weddings must be sanctioned by the Orthodox-controlled Rabbinate.

Melman and Bronstein are planning a joint “tisch” — the traditional bridegroom’s table, where the bridegroom signs the marriage contract and offers words of Torah. In their case, both the bride and groom will speak. The couple also will sign a “partnership agreement” in addition to the regular ketubah, or marriage contract.

“I wanted to be more involved than just sitting in a chair and looking pretty,” Melman said.

Increasingly, Israeli couples are seeking to create weddings that are more reflective of their own lifestyles. But because Israel has no civil marriage and the Rabbinate retains exclusive control over marriage and divorce, this puts many couples in Israel on a collision course with the Rabbinate.

“The area of marriage is one of the most bitter areas of tension between secular Israelis and the religious establishment,” said Nachman Rosenberg, the executive vice president of Tzohar, a Zionist rabbinic organization devoted to bridging gaps between secular and Orthodox Israelis.

In Israel, weddings must be performed by an Orthodox rabbi on the Rabbinate’s list. Most of these rabbis are haredi Orthodox, as are most of the 182 government-appointed regional rabbis in Israeli towns and cities who issue marriage licenses to couples who live in their cities.

Some Israeli couples are put off by the bureaucracy of the Rabbinate, others by mandatory “bride’s classes” in which critics say that brides often are told that if they don’t observe the laws of family purity and go to the mikvah regularly, they or their children will be plagued by disease.

But a growing number of Israeli couples want alternatives in Israel that are recognized by law yet bypass the Rabbinate’s rabbis. Organizations such as Tzohar have been offering such alternatives to Rabbinate-officiated weddings, allowing couples to add personal touches to their wedding ceremonies while staying within the confines of Jewish law.

Tzohar rabbis do not charge for their services. The rabbis from the Rabbinate are not supposed to charge, either, but many suggest a “tip” that is usually about $250, several officials in both the Rabbinate and Tzohar confirmed. Tzohar now handles some 3,000 couples annually.

“We try to make the wedding an uplifting and positive experience,” Rosenberg said.

A couple of weeks ago, tensions between the Rabbinate and Tzohar erupted when Israel’s Ministry of Religious Affairs announced that Tzohar rabbis would no longer be allowed to perform weddings. In a bit of a legal fiction, Tzohar was marrying couples throughout the country but registering them in towns whose official rabbis are sympathetic to Tzohar. The ministry said weddings must be registered in the town where they are performed.

“It is very important that the rabbi doing the wedding know the couple and know 100 percent that they are Jewish,” Rabbi Rasson Amrusi, the chief rabbi of the Israeli city of Kiryat Ono and the chairman of the Rabbinate’s Marriage Committee, told JTA. “That is why we want the registration to be where the couple lives.”

But Tzohar and its supporters saw the bid as a power play by the haredi-dominated Rabbinate to disenfranchise the more liberal Orthodox rabbis employed by Tzohar. Following a public outcry, the Religious Affairs Ministry backed down.

Irit Koren, author of a book about Orthodox Jewish marriage called “You Are Hereby Consecrated to Me,” says that many of those seeking alternatives are observant Jewish women looking for new rituals to make the marriage ceremony more egalitarian.

“As opposed to most secular women, who are concerned mainly with their dress and makeup, these women are very knowledgeable about Judaism and they put a lot of thought into what the ritual means,” Koren said. “They deal with the tension between halachah and ideology.”

For example, Koren cites the ritual of the bedecken, when the groom traditionally comes and veils the bride, who then remains veiled for the entire wedding ceremony.

“For some women, it was very romantic and they saw it as something that gives them some privacy,” Koren said. “But for some it felt like a burka. They felt that at the most important moment of their life they wanted to be uncovered and stand with their whole essence, like their husband.”

Amrusi says those sorts of changes are fine.

“We have many weddings where the bride shows her face,” he said. “But there are some things that we can’t allow, like when the bride gives the groom a ring. That’s one of the things that Reform Jews do.”

Amrusi says the Rabbinate’s rabbis try to be sensitive to the desires of the couple but they cannot violate Jewish law. He says exchanging rings during the traditional ceremony is forbidden because only the man’s ring can signify the “kinyan,” or acquisition, of a wife by her husband.

Nevertheless, many couples want to find a way to exchange a token of their affection.

“One thing I suggest is to have the bride and groom give each other a tallit under the chupah,” said Rabbi Haviva Ner-David, founder of Reut, the Center for Modern Jewish Marriage.

Since the chupah symbolizes the groom’s home, Ner-David also suggests that instead of the groom waiting under the chupah for the bride to be led to him, he wait just below the chupah and they enter together. Together they can also break the glass, which symbolizes the destruction of the Temple in Jerusalem. Women also may read English translations of the Seven Blessings or add an eighth blessing. Many women also make their own chupah.

Koren says that efforts to change the wedding ceremony are only the first step in making Orthodox Jewish ritual more egalitarian.

“The change in the previous generation was that women began seriously learning Torah for the first time,” she said. “Reform in marriage will happen eventually, but I can’t tell you how long it will take.”