In Illinois, faceoff between Jewish candidates seen as bellwether for Dems 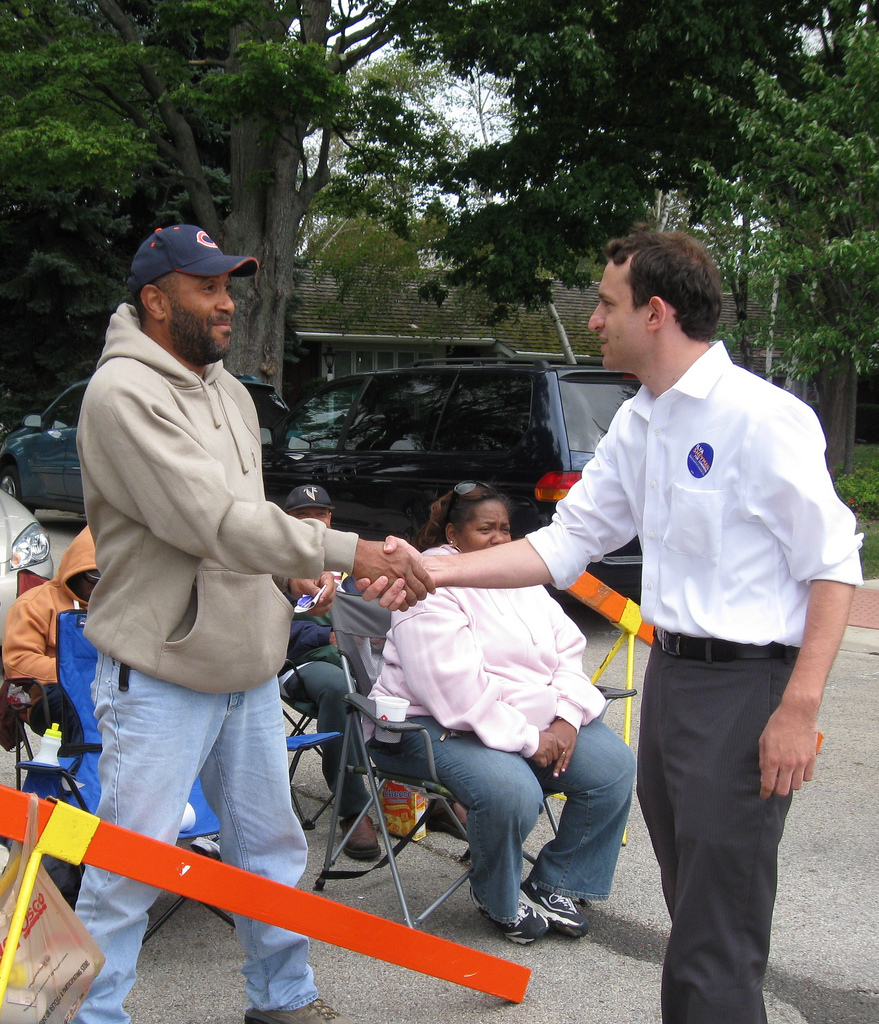 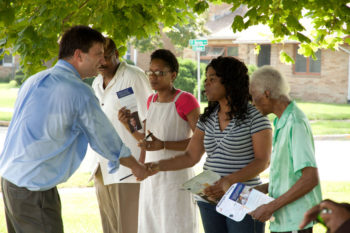 WASHINGTON (JTA) — A suburban Chicago congressional primary featuring two Jewish candidates is being cast by political observers as a test of the Democratic Party’s direction.

The race’s two highest profile candidates are Brad Schneider, who enjoys establishment support and has strong ties to the organized Jewish community, and Ilya Sheyman, a 25-year-old progressive activist who has proven to be a whiz at small-donor fundraising.

In addition to the race’s generational aspect — Schneider, 50, is twice the age of Sheyman — observers see the primary as a bellwether for Democrats as they head into the 2012 elections: Will the party tack left or try to hold closer to the center?

David Catanese, Politico’s campaign blogger, last week cast the choice for Democrats this way: “Go with their heart — the young, idealistic and more progressive Sheyman — or play safer with their head in supporting Schneider, who arguably could attract more independent and unaffiliated support by showcasing his business background.”

Each candidate seems to embrace the templates: Schneider emphasizes his business savvy as an MBA who heads a successful business consultancy. Sheyman touts his career with MoveOn.org, a netroots advocacy group that represents the Democratic Party’s left flank, and as a community organizer.

Neither candidate is shy about advertising his Jewishness. Sheyman’s releases routinely describe him as “a Jewish immigrant from the former Soviet Union.” Schneider’s official biography lists his leadership in four Jewish groups. In an interview, Schneider recalls his “romantic” first date with his wife: watching a seminal 1988 Israeli-Palestinian debate on “Nightline.”

The candidates also are aggressively “pro” on the two issues that have mattered most to Jewish political organizers in the district: abortion rights and Israel.

Marcia Balonick, the executive director of JACPAC, the 10th District-based Joint Action Committee for Political Affairs, explains why her group is withholding an endorsement for now.

“We follow a criteria that we put in place 30 years ago,” she said. “If there’s a crowded primary and two candidates give us papers that are good for our issues, we don’t endorse.”

That’s the case with Schneider and Sheyman, said Balonick, whose group gives only to candidates who support abortion rights and are pro-Israel.

Schneider’s campaign website does not elaborate on his Israel views beyond a single sentence: “Leading the pursuit for real security and peace in the Middle East.”

Schneider, however, has deep roots in the Jewish community. He is involved with the American Israel Public Affairs Committee and the Jewish United Fund/Jewish Federation of Metropolitan Chicago, and is a member of the American Jewish Committee’s Chicago region executive committee.

Schneider, who has lived in Israel, played down foreign policy in an interview, saying the emphasis should be on jobs, education and the social safety net.

“We can’t call ourselves a great country if we aren’t taking care of the most vulnerable among us,” he told JTA.

Sheyman in an interview has a similar emphasis.

“Through hard work and support from the community and government, we were able to create a good life,” he said. “This is slipping away for families across our community.”

He also notes his own Jewish organizational connection: The Hebrew Immigrant Aid Society assisted his family, which arrived in 1991.

Sheyman’s website articulates his position on Israel in great detail. The only issue on his “issues” page that features a link to a separate PDF statement is the section on Israel.

In the three-page document, titled “Standing Up for Israel,” Sheyman calls for an active U.S. involvement in brokering peace — language that suggests a familiarity with the stances of dovish Israel groups — while insisting that a “final status agreement must come from direct negotiations between Israel and the Palestinian Authority,” mirroring Israel’s insistence that Palestinians return to the negotiating table.

Democrats see the 10th District as a likely pickup in 2012, principally because post-census redistricting has made the district — which includes a mix of wealthy suburbs and struggling towns north of Chicago — more Democratic than it was in 2010.

Mark Kirk, a moderate Republican, represented the 10th for a decade, winning close elections in a district with a substantial Jewish population by being a leader on pro-Israel issues while trending more to the center on social issues such as abortion and health care.

Kirk relinquished the seat in 2010 for a successful Senate run and was succeeded by Rep. Robert Dold (R-Ill.), narrowly defeating a Democratic opponent by 2 percentage points . in last year’s GOP sweep. Dold, however, has disappointed those who had hoped he would maintain Kirk’s tradition of moderation.

Insiders say that although Dold has assiduously courted the Jewish community, the death knell for his prospects of winning broad Jewish support came last month when he voted for the Protect Life Act — a measure that is anathema to abortion rights supporters.

Democrats are feeling good about their prospects in the race even 12 months ahead of the election.

Lauren Beth Gash, chairwoman of the 10th Congressional District Democrats, says she tells voters not to worry too much about which candidate is likeliest to best Dold.

“Whoever wins the primary has a better chance of beating Dold,” she said.

Schneider and Sheyman have been joined in the race by John Tree, an Air Force Reserves colonel who declared last week. Tree has just started fundraising, so his strength among donors is not yet clear. Tree is not Jewish, although his wife is, and he has made much of his cooperation with Israel when he served in the Middle East as an Air Force logistics chief. His campaign has said that he has visited Israel at least a dozen times.

Schneider leads Sheyman overall in fundraising, with more than $400,000 on hand against Sheyman’s $140,000, according to Federal Election Commission returns. Sheyman, however, has surged in the most recent quarter while Schneider has stalled.

Much of Sheyman’s income is from $10 to $15 online donations, a reflection of his roots as a community organizer and in the MoveOn.org movement, said his spokeswoman, Joanna Klonsky.

“People are hungry for a progressive candidate,” she said.

Schneider had entered the race as a favorite who had close ties to the Democratic establishment, particularly to Melissa Bean, a former congresswoman from the neighboring 8th District. He recently gained the endorsement of Rep. Steny Hoyer (D-Md.), the U.S. House of Representatives minority whip.

Sheyman has the endorsement of the House Progressive Caucus co-chairmen, Reps. Raul Grijalva (D-Ill.) and Keith Ellison (D-Minn.). He also has the backing of Reps. Danny Davis and Jesse Jackson Jr., who both represent Chicago in Congress.

Schneider and his supporters refer obliquely to Sheyman’s youth.

“I’m old enough to know that the first answer you think of to a problem is in the right direction — but you have to dig deeper,” Schneider said.

Steve Sheffey, a veteran pro-Israel and Democratic activist, says he is backing Schneider because of his experience.

“Ilya is a nice guy, I like a lot of the positions he takes, he’s done a great job in his grass-roots campaign,” Sheffey said. “But Brad has a better shot against Dold. He can say, ‘I’m pro-Israel, I’m a businessman, I have a family.’ ”

Not that Sheyman is not pro-Israel, Sheffey is quick to add: “What Ilya has said about Israel seems to be good, but Brad has the depth of experience.”

Sheyman was in Israel for the first time in March, at a reunion with relatives who had made aliyah. The most striking impression, he said, was the Jewish Quarter in Jerusalem’s Old City, which he said was extraordinary for its newness.

“It embodies thousands of years of  history, but it is new because under Jordanian rule, most of it burned down,” he said.

Gash, the district’s party chairwoman, said she has talked to donors who prioritize Israel as an issue, and they believe Sheyman walks the walk.

“Some of them who were not with him in the beginning are with him now,” she said.