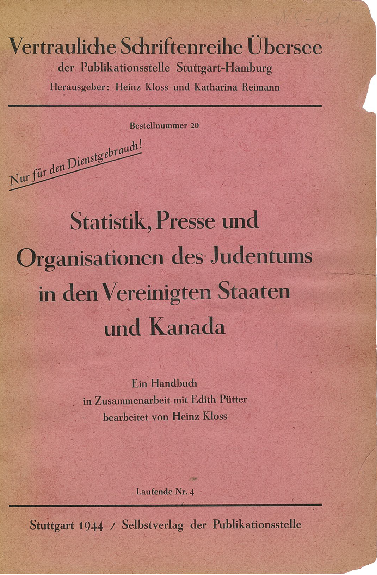 Oh my gosh, Hitler touched this book, too.

The marketplace for Nazi memorabilia has been sensationalized in tabloids and served as the plotline for a 2008 episode of CSI: New York:

An Op-Ed piece in Wednesday’s New York Times described another item of Nazi memorabilia up on the auction block: statistical survey of American Jewish organizations prepared by Dr. Heinz Kloss. Kloss, a non-Jewish linguist by profession, studied Yiddish to the point where he was conversant in Yiddish. According to Timothy W. Ryback, author of the Times Op-Ed, Kloss visited the U.S. in the early 1930s to learn about the Jewish landscape there. In 1944, he compiled his findings into a 137-page report that wound up in Hitler’s personal library, marked "for official use only!"

That day, I strolled down the block to the Kestenbaum & Company auctioneers’ office to get a preliminary feel for the next day’s auction of 350 lots, whose appraised value ranged from a $300-$500 letter to a $100,000-$120,000 first edition of a Bomberg Talmud tractate Bava Batra. About a dozen people walked in and out during the time I was there  — a man with a ponytail perusing an illuminated Hebrew manuscript, a young woman marvelling at an illuminated manuscript of a Haggadah, a Chasidic man looking over a bound volume of the Zohar. Little did I know that I would also be permitted to handle the item I was interested in: Lot 138, appraised at $3,000-$5,000.

Upon removing it from the plastic, the red front cover was detached. (I didn’t do it, I swear — check the description in the catalog.) Flipping it over, I was startled by the red-ink bookplate of Hitler that read, "Ex Libris Adolf Hitler" with a menacing eagle in the middle. I had asked to take a picture of the startling image, but was told by staff member Abby Meyer that this couldn’t be arranged, "out of sensitivity concerns," primarily for victims of the Holocaust.

Flipping through the volume, I saw the names of 211 organizations — 37 Jewish fraternities and sororities, 3 organizations of war veterans — plus dozens of Jewish publications. Including JTA.

Suddenly, I recoiled. My sudden fear of not runing the binding was eclipsed by a more sinister fact: this was a surveilance document.

In 2008, the Mumbai terrorists availed themselves of Google Earth. On July 13, 2011, the Twitteratti were aflutter following reports that the Indian government was requesting access to Google and Skype data, citing security concerns. Hours later, three coordinated bombs were detonated

This was Hitler’s phone book. 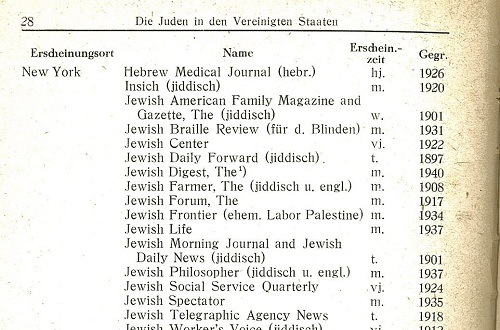